In news, you have hardball, softball and now, apparently we have wiffle ball reporting. In today’s article about the WSU shenanigans. No where in the article are any actual people named as guilty in this obvious scheme to break the law in terms of federal contracting and employment law. The Department of Justice didn’t have a press conference, didn’t announce the names, photos didn’t appear on the front page of the paper. 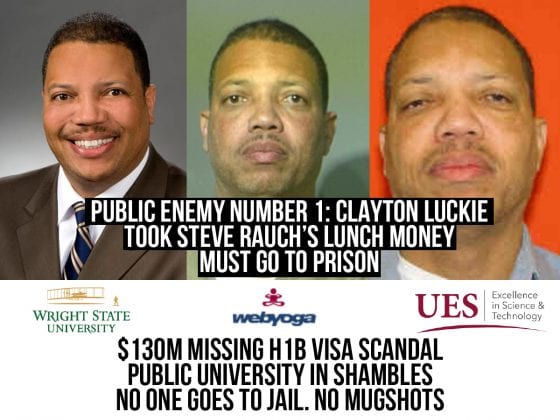 Clayton Luckie’s fall from grace is well documented. No faces to the WSU fiasco.

Let’s compare and contrast their treatment of one disgraced former politician, Clayton Luckie. Clayton set up a shell company, ordered a couple of hundred dollars worth of vehicle magnetic signs and participated on government contracts as a minority owned firm and slapped his signs on someone else’s equipment who did the work.

The company that did the work was never named, although we can guess it was connected to Steve Rauch or one of his former employees, and all the government could prove was that Clayton got a couple of thousand dollars in kickbacks. For that, he’s going to prison for a few months, has had his photo smeared across the local news, and will be on post release control for about 3 years.

In this article, no names, no photos, and no jail time, for a scheme that was worth hundreds of thousands of dollars. Apparently, because “Corporations are people too” as “Citizens United” created a way for corporations to influence elections, we now have corporate ghosts capable of committing crimes without fear of prosecution.

For the record, Web Yoga is owned and run by Vijay Vallabhaneni. Oddly, he doesn’t seem to have much of an online presence, except someone with the same name is claiming to now run a company calledErudex LLC, one of those strange companies that doesn’t list a contact address, anywhere on the site.

Web Yoga Inc. was sentenced to pay a $566,000 fine in U.S. District Court by Judge Thomas Rose. The amount was determined before the sentence by prosecutors and the defense but needed the judges’ approval before becoming official…

Web Yoga’s legal troubles started during the summer of 2010, when an official with Wright State approached Web Yoga and proposed an arrangement whereby the university would source H-1B visa holders from overseas and subcontract them to Web Yoga for placement at client locations around the country, according to the U.S. Department of Justice.

Between 2010 and 2013, WSU entered into sponsored research contracts with Web Yoga. Wright State employed software engineers, obtained H-1B visas for the employees, and paid their respective salary and benefits as employees of the university, according to the DO J.

The H-1B visa program allows companies in the United States to temporarily employ foreign workers in occupations that require highly specialized knowledge and a bachelor’s or higher degree in a specific specialty.

Wright State was sometimes “exempt” from a cap limiting the number of H-1B visas it could obtain, unlike other types of organizations.

Wright State employed 24 foreign employees who were selected and approved by Web Yoga through H-1B visas, according to the DO J. Web Yoga learned in 2012 that portions of the H-1B visa paperwork filed by Wright State with the federal government did not accurately reflect the work locations for the visa holders subcontracted to the company.

Web Yoga learned the university falsely stated the employees would be physically working on the university’s campus. The visa employees worked as consultants on behalf of Web Yoga in various cities throughout the country, including Atlanta, Orlando and New York City, according to the DO J.

The U.S. Attorney’s Office agreed not to pursue civil or criminal prosecution of Wright State since the university agreed to pay $1 million in three installments over two years. WSU also agreed to cooperate in any additional investigations stemming from the federal probe…

Sources have told me that “an official with Wright State ” was former WSU Provost Sundaram Narayanan. They’ve also said that Web Yoga got the easy treatment by fully cooperating and handing over all their information. The same can’t be said of the folks at Wright State, which brings to question when the DOJ will actually go after the “engineer” of this scheme. So far, all that’s happened is that you and me, the taxpayers, have paid a million dollar fine from WSU to you and me, the Federal Government, which is a joke of a punishment, since neither “institution” has actually done anything meaningful to make this right.  UES was also implicated in the H1B visa scandal, and it’s CEO, Nina Joshi was on the board of trustees at Wright State- no mug shot, no arrest, no indictment, no fine…

Makes you wonder what “justice” looks like in this country, because if you are Vijay Vallabhaneni, paying $566K and not being named, indicted, or doing jail time sure beats what happened to Clayton Luckie. And for the record, this isn’t the first time I’ve questioned this questionable justice:

Universities are people too? WSU gets a fine and a gag order on H1B visa scandal

It’s time for justice to actually balance the scales or there is no justice.

David, you are spot on, but I’m surprised you didn’t mention oligarch Raj Soin’s role in this corruption.

@Beth, you mean the Greg Sample who is now the “President Administration” of WSU? https://people.wright.edu/gregory.sample

While I agree that more should be done to the perpetrators of the H1B visa abuse at WSU, comparing the treatment of WSU to the treatment of the “once disgraced” Clayton Luckie is a bit misleading considering Clayton Luckie has a history with the department of corrections. It is plausible to believe that his previous pleas of guilty to… what was it… 8 felony counts and 1 misdemeanor count may have more influence on his current treatment than anything else discussed in the post. As stated earlier, I agree with your take on the inaction regarding WSU, but using that inaction to call the actions taken against a self-confessed multiple felon “injustice” doesn’t strengthen your argument. To inform those who are unaware or have chosen to forget history here is a copy and pasted article from the DDN: Ex-State Rep. Luckie going to prison Ohio Jan 23, 2013 By Laura A. Bischoff, Columbus bureau COLUMBUS — Former state lawmaker Clayton Luckie was sentenced to three years in prison and three years of probation Tuesday under a plea agreement with the Franklin County Prosecutor on charges the Dayton Democrat misused his campaign account while serving in the Ohio House of Representatives. Luckie also was ordered to repay $11,893 that he received in salary as an Ohio House member from when he was indicted in October until his term ended on Dec. 31. While Luckie will report March 18 to begin his state prison time, he could be eligible for early release after as little as six months behind bars, depending in part on his cooperation in an ongoing FBI investigation. Under the plea agreement reached Tuesday, prosecutors dropped 42 criminal counts and added a grand theft charge. Luckie then pleaded guilty to the remaining eight felony counts and one misdemeanor count. Authorities accused Luckie of diverting as much as $130,000 from his campaign account between 2006 and 2012, including $9,825 in checks written to himself, 169 cash withdrawals totaling $19,000, and 800 debit card transactions totaling almost $40,000. Much of the spending did not appear to be campaign related: ATM withdrawals… Read more »