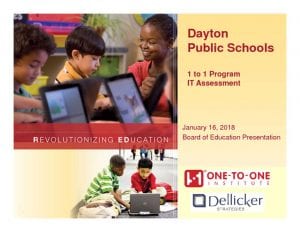 The deck for the 1 to 1 institute recommendations, Harris cut them off before they could explain the critical slide 14. Click to download PDF

Reverend William Harris, who still can’t say my name right, or that of Mohamed Al-Hamdani, flexed his new presidential muscle in his first meeting as commander in chief by cutting off a presentation by consultants who were hired by the board to report back on out 1 to 1 computer implementation. With no time limits on the agenda, just as the consultants were getting into the meat of their report, he ended their presentation- about 30 minutes in. Sheila Taylor was the ONLY board member who had the guts and wisdom to question his actions. The rest sat deaf dumb and mute. Taylor, was clearly in the right- as no board member has the right to speak for the entire board as clearly outlined in OSBA rules.

I cited this statement in my post about the attempt by Mohamed Al-Hamdani to close the illegal meeting about school closings to the public:

As a start, the following guidelines are offered. A good board member:
• Knows that he or she can legally act as a board member only when the board of education is in session. No one person, unless authorized, should speak on behalf of the board.

Source: Esrati and his video camera shut down first task force meeting before it starts – Esrati

Harris was authorized to speak for the board- but, when he made the unilateral decision, and Taylor questioned it, the proper move was to call for a vote on the continuation of the presentation by all board members. Harris just shut it down.

The critical slide 14- where the actual steps moving forward were to be discussed is what we missed. It was the main reason I was interested in their presentation. The slide read: 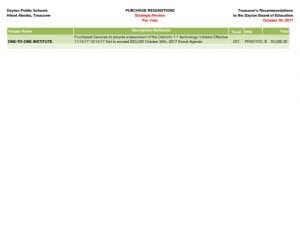 They spent $30K for a report, but didn’t want to hear the meat of it. Click to download PDF

This was a $30K contract, approved at a non-business meeting (no public input) on Oct. 30th 2017. You think for $30K they’d be allowed to finish. The key takeaway was we did good at hiring more IT people and building infrastructure, the weakness was that this process should have been run by more than one person (Baguirov gets all the credit) and that it should have had more top level buy in. We didn’t get to hear the rest, so, oh, well.

On to my presentation, Harris tried to tell me that my 3 minutes started when I approached the podium- not when I began speaking. My teleprompter app had flipped on mirror text and I was resetting it.
Here is the text of what I said:

Congratulations to the voters of the Dayton Public School district for selecting four new board members, a majority, to redirect a failing district that has been characterized by a complete failure of leadership to instill confidence in their abilities or the future of the district.

The actions of the previous board and their ineptly chosen Superintendent have led to 20% turnover in staff, an almost completely new central office team, and a shrinking enrollment that has put school building closure on the agenda.

There is unfinished business from last year. The completion of the firing of Rhonda Corr should be foremost on the agenda. How her original mediocre evaluation penned by John McManus was changed to glowing now is incredibly relevant to her termination. We need to know what part remaining board members had in that change, and that they be held accountable.

Investigations on how and why Dr. Adil Baguirov was allowed to remain on the board after I made it clear he didn’t live in the district, and then proceeded to actively push a bus deal through procurement that not only is a violation of board policy- but also a conflict of interest since his private business does business with the vendors in the process.

These are not matters that should be overlooked. They have serious long term implications for the district, as well as set the tone for how this board will differ from the last one and everyone preceding it.

However, whatever hopes the citizens had for change have already been crassly violated, when the last board apparently sanctioned the interim superintendent to join a task force to study school closings without a proper vote to assign members or outline the scope and authority of the task force.

That a board member elect was named co-chair before he’d even been seated to this board does nothing to instill confidence in this new board. That he argued from his position of authority as a board member and a licensed attorney that the meetings should be held in private in violation of the Ohio Open Meetings laws- commonly known as the Sunshine Laws do not bode well for the future of this board.

But, beyond all that, this board met a week ago, and blindly followed the direction of the interim superintendent who crafted the agenda. Again, tonight, we see the same thing. The superintendent leading the direction of the meeting- with no real change in direction- other than to change the way you approve her agenda items to require only one vote instead of several- using simplified a “consent agenda”

Where is your direction to the superintendent on addressing issues of student safety? Besides the riot at Ponitz that the former superintendent tried to cover up, just last week we had a full fledged brawl at the Dunbar Thurgood basketball game. If you want people to send their kids to your schools- they have to feel safe. I see no item on the agenda on this.

Since we’re dropping in enrollment, what steps have you formulated to evaluate the performance of your superintendent and the district PR department that was hired last year by the former superintendent after your purchasing department failed to hire a PR firm in a legitimate, defensible manner? Your current PR people can’t even keep your site up to date. The time of this meeting wasn’t online.

And lastly, we need to have an actual role call to determine which of you support this closing task force meeting in private so voters will know who actually deserves a seat on the dais.

We voted for new people with a promise of transparency- yet, we’ve yet to see it.

By a simple yes or no response from each member, I need a response to that last issue. Failure to do so- will be taken as complicity to violate the Sunshine laws.
Thank you

Their response: nothing. So they all agree that it’s ok to have some task force meet in private to discuss the future of our school closings.

But- wait, then as I got back to the camera, Karen Wick-Gagnet made a statement suggesting there has been no additional movement on the task force and they are still new at this and are working to set a new culture. She didn’t answer the question, but at least acknowledged that they have work to do and are still learning.

Once again, Harris, who has been on the board for more than a few of these, stumbled and voted YES on resignations after July 10. Al-Hamdani meekly followed with a NO, then others followed until Jocelyn Rhynard voted YES- and then as seemed to happen more than a few times, Harris forgot to get Wick-Gagnet’s vote. Then Rhynard realized her error- asked for a re-vote, more confusion as it was sorted out- until we had the right 7 No vote that is normal to not accept resignation under contract.

I softly applauded as they finally got it right.

There was also a question about using a consent agenda by Taylor, who wasn’t familiar with the process. She was right to question its use, and that it should have required a vote to agree to implement the new process, however she couldn’t make her statement clearly. The process allows items that have been covered in the review meeting to be passed together, as one vote instead of separate votes. The new process wasn’t on the review meetings agenda- it hadn’t been discussed, therefore Taylor was correct- it needed to be voted on. They didn’t.
They also failed to vote on the treasurers recommendations, which were included in the consent agenda, but then read separately after they had voted- thereby creating the need for a vote. But, what’s getting it right when you are new at this… optional.

It wasn’t long before Harris once again was forgetting how to count to seven before calling the results of a role call, I quietly corrected them- before they proceeded. He’d skipped Wick-Gagnet.

Next thing you know DPS Media maven Marsha Bonhart is in the back talking to security and then came to ask me to stay silent- and not “shout out.” To which I said, 1) it’s embarrassing that they don’t know what they are voting on. 2) If I was shouting- you’d know it.
She left having assurances that I’d keep to myself as they were almost done.

Once again the board used “New business” which is when you are supposed to introduce issues requiring a vote to make speeches. All were stupid, except Wick-Gagnet’s who talked about how we change culture to change outcome. Worth a listen. Again, wrong part of the agenda, but, we’ll probably have to wait until they hire a proper parliamentarian.

After the meeting wrapped up in a timely 75 minutes, they headed into executive session to discuss a personnel issue and a real estate issue. Spotting  attorney Beverly A. Meyer going in, it’s a good bet that they were discussing strategy for final termination of Corr, ie settlement. Meyer was the attorney who uncovered many of Corr’s shortcomings when she was hired to investigate the work environment of Dr. Markay Winston- who’s accusations were mostly unfounded in her findings.

The board attorney said there would be no announcement after executive session.

The Fifth Third building just sold for $35 +/- per square foot. This is a ridiculously low price, and indicates clearly (to me, anyway) that doing business in Dayton must not be very popular.

The lousy school system, the corrupt and incompetent local government, the lack of transparency, the cronyism, the substandard city services…….all of these factors (and others) drive away businesses that might become Fifth Third tenants.

Even at the fire-sale price of $35 sf, they probably overpaid.