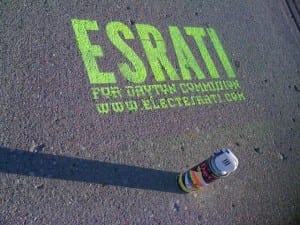 The call came before I was done with my last two “tags”- my housemate, who has had his share of run-ins with the law, was sure that he’d caught me breaking the law. You could almost hear the glee in his voice. “You know they’ve got you on camera” were the first words out of his mouth- “It’s spray chalk” was my answer, and you could almost tell that he was both bummed that he hadn’t caught me, and laughing his butt off- at the thought of the consternation I was probably causing someone trying to get a warrant issued for my arrest at this very moment.

I don’t have $30K in my war chest to spend on billboards, TV, radio etc. like Nan Whaley. And, if I did, I’d be a bit concerned on who in their right mind gives someone like her $5,500 toward a campaign for Dayton City Commission- where it takes at least three votes to pass anything (big donor did cover his bets- giving the Mayor $10K). Instead, I get stencils made at Dayton Stencil on E. 2nd Street and order Day-Glo Spray Chalk from my hometown company- The Day Glo Company in Cleveland. I’m not new to chalking sidewalks, or the issues of it’s legality- you can read some posts from my company website on chalk, Shepard Fairey, and the Greater Dayton Advertising Association here: http://www.thenextwave.biz/tnw/index.php?s=chalk+sidewalk

Spray chalk is temporary, like most candidate’s campaign promises. For me, it’s just another small pebble in my slingshot campaign against the Goliath.

If you’d like to buy a few cans of spray chalk to help the campaign- or even volunteer to help distribute literature, please go to www.electesrati.com and make a donation or join the team.

If you are here- for the first time because you saw the writing on the sidewalk, welcome. Please explore other posts- to see what Dayton’s most progressive candidate has to say about improving Dayton, and feel free to join in the conversation.

If you enjoyed this post, make sure you subscribe to my RSS feed! If you wish to support this blog and independent journalism in Dayton, consider donating. All of the effort that goes into writing posts and creating videos comes directly out of my pocket, so any amount helps!
Subscribe
18 Comments
Inline Feedbacks
View all comments

Those of us who are allergic to chalk dust will be filing an ADA complaint. ;-b


I was thinking of doing something like this to fluff my old blog back when I was starting it, but with stickers and those postcard flyers.  I like this idea better.

Wow, David, great idea. Can I get a stencil from you? I’m sure my son would be very keen to help!

I ordered some fun dayglo sprayable chalk (in pink, of course).  Now all I need is a succinct stencil that says something like “Joey Williams abstained on banning discrimination against the gays; let’s abstain on voting for Joey Williams.”  That’s a too wordy, but I’ll come up with something.  Maybe “Joey D. Williams says discrimination is okay — let’s discriminate against him on November 3rd.”

why not put all your effort into getting me elected- and not worry about the other two. Every vote for one of them- cancels your vote for me. Change starts with one small step.

I had this same idea for a local business but wasn’t sure of it – its funny to see how the city will/does over-react and waste my tax dollars.

Yeah, thanks for wasting my time today….You REALLY should get permission before you do this. I have more important things to deal with at my job, than to have to clean up your mess. This really is just a form of vandalism….yeah I’ll be sure to tell everyone to vote for you….not! What an idiot!

BTW Nathan, this is how the city is over-reacting to this. You want to talk about wasting tax dollars??? How about having workers waste time cleaning up chalk????

Sorry your employer chose to direct you to clean up chalk. I suppose hop-scotch on sidewalks is your next major task. The chalk only hurt someone’s ego- it has nothing to do with keeping the city clean and safe.

One rainstorm and it all goes away. Pity the people in city hall can’t handle it.

Who employees “Me”? the city?

Maybe “Me” is the gardner at Nan Whaley’s . . .  Excellent sniveler, though. I suggest that in the interest of harmony in the ‘hood, that such tagging be proscribed to certain kinds of public places and not for instance, the facade of the Doubletree Hotel . . .

@Larkin- I only tag sidewalks, streets, that are public. It’s chalk, not paint. And, who @Me, should I “get permission” from. BTW- @Me only removed about 5 of the tags- a lot are still out there. There will be more.

THANK YOU! It’s chalk people – these are things we get worked up over? Not our local gov’t wasting YOUR money on ridiculous things such as a garden on top of city hall…which I am only guessing is not open to the public.

I saw chalk the City Commissioners then let’s head over to the County Building and chalk that bunch!

Yes, “me” had to clean up your chalk. One of my tasks is to keep the place I work clean…. when I have to clean nonsense, my other duties get delayed, because the appearance of my workplace to the community if foremost. It has been given notice to my supervisors and they said they would to talk to David about his Vandalism…..FYI…chalk spreads through footprints and bike wheels…leaving green streaks all over the areas…. thanks again buddy….

I just read a story about chalk getting someone in trouble that made me think of this post. See “California Man Faces 13 Years In Jail For Writing Anti-Big Bank Messages In Chalk“:

Wow- David Lauri- that’s an amazing story- and, of course, since it’s campaign time- I’m back to spray chalking messages again…. I hope no one gets the idea to file charges against me- but, I’m almost sure it’s coming now that you’ve shared precedent with our community here….