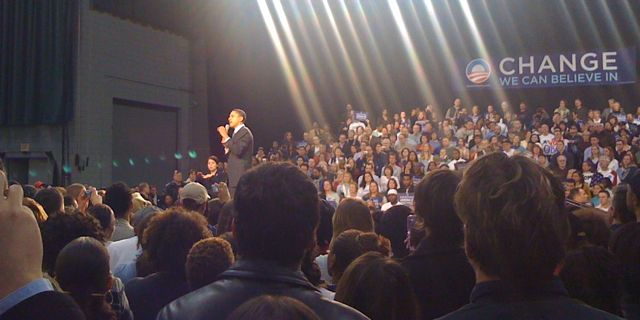 I was on the floor, maybe 30 feet from the Senator- Wright State University- Nutter Center, I had my Olmpus WS-300M hanging in my name badge on my chest- it sounds like you are in a fishbowl- but, that’s what the Nutter Center sounds like. Every seat was filled, there were people 10 deep on the party decks by Gates 3 and 6- half the floor was used by the press- but it still had to be real close to a capacity crowd of 10,000+

I’d love to transcribe the speech- but no time now, thought I’d throw it up for all of you to download for your commute to work tomorrow. If I wasn’t listening to the Next President of the United States, I’ll be amazed. Yes, he gives a great speech- and he says the right things- but he also admits, he won’t always tell us what we want to hear, there are still huge obstacles to overcome.

I don’t think there is anything wrong in believing in this man- we’ve needed someone to bring this country back together. Ever since 2000, I’m sick of hearing red/blue- I’m an American, and we used to be Red, White and Blue- all of us, together. I believe.

And, yes, that was me in the parking lot “I’m running for Congress, Need something to read while you’re waiting!” Hope a bunch of you did read- came here, and are believers too now.

Thanks for the ObamaCast! It was a great way to start my morn…When he said ‘change starts from the bottom up, not top down’ It reminded me of something you said in one of your websiteology speeches…maybe Obama lifted that line from you! LOL

David (and everyone), check this out! Darren got to shake hands and present the candidate with the beautiful stained glass logo he did!

(I would have e-mailed this link, but my e-mail is down. If inappropriate, take it down. Thanks.)

Does anyone know where I can find a link to the Obama Stained Glass Piece? I looked on the site that was linked, but couldn’t find it. Thanks

TB,
Unfortunately, my man neglected to take a picture of the piece before he gave it away(grrr, forgetful artist boy!) However, it looks exactly like the “O” in Obama’s logo – pretty light blue glass, with red and white wavy stripes.

Every seat was definitely not full, though i can see how it looked like it from the bottom. I was up in the stands and there were gaps between most people that weren’t directly on the sides of him and the little crowd by the stage, about 6 spaces between me and my closest neighbors, and the back didn’t get anyone in it til the very last minute. :-\ It was rather dissapointing, really. The speech was great though (even though I had people snarking behind me the whole time). It was exciting when he said Wright State though, because i’m a big geek ike that.

My only goal was to get the stained glass piece to the campaign, being personally thanked by Barack Obama was special. Thank you for the support in my mission David