For Gary, who couldn’t afford a single mailing- it was all the PR he needed.

Today- I got a mailer for Colette Moorman who is running for Dayton Municipal Court. It starts with a picture of her in robes- with a gavel-  which is sort of OK- since she is currently a magistrate.

But, flip it over- and it asks you to compare with her opponent- Mia Wortham Spells (full disclosure, my firm did all the design, print support and website for Mia Spells).

It has two lists of  boxes to check off- with X’s in Mia’s column. Note- that they were both assistant Dayton City Prosecutors- but somehow- it’s good for Colette and bad for Mia. That Mia had a private practice is also somehow bad- as if being an actual attorney- instead of on the government payroll as a political crony your entire career is a good thing.

And, yes, Mia was “Recommended by the Montgomery County Republican Party Screening Committee”- but Mia was also endorsed by the Miami Valley Trial Lawyers Association–  as opposed to a bunch of politicians and labor organizations.

All this is normal – Dems rack up endorsements of the Monarchy of Montgomery County and their puppets- others don’t.

But, when I went to look at the piece again- for the disclaimer of who paid for the campaign- or who her treasurer was- it wasn’t there. Bad candidate. Wrong. Illegal. So much for Colette operating properly. It was mailed by the party- but the mailer still requires a disclaimer.

The problem with election laws like the disclaimer one, is there is no undo button. The damage is done- but, in this case, hopefully- it points out to everyone that they do have a choice- and the right candidate will prevail. 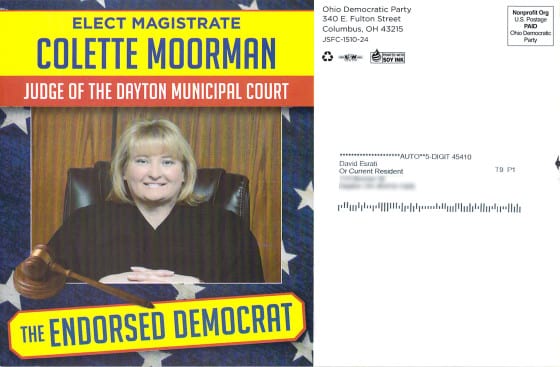 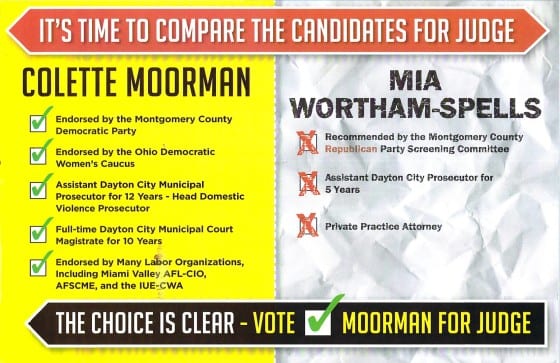 As a comparison- here is Mia’s mailer. 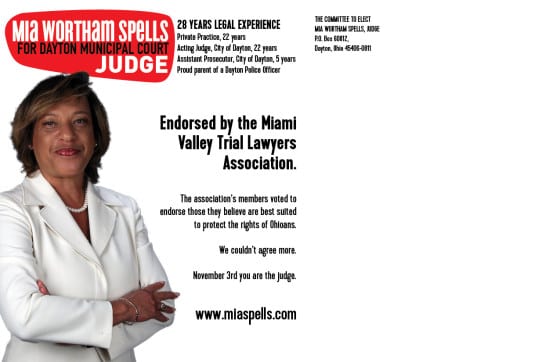 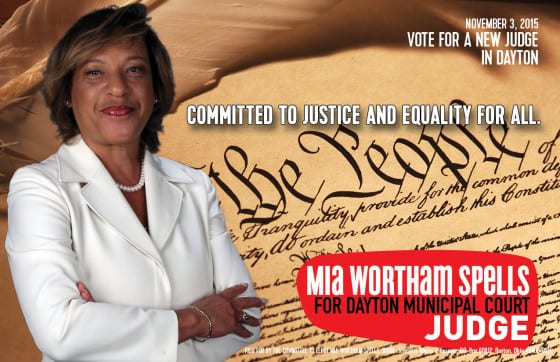 David,
You left out that Mia Wortham is also endorsed by the Jazz Advocate.

The Dems mailed out eight pieces for Rhine McLin in 2009. Five pieces were negative about me. I brought the mailings to candidates nights and used them as props to let people know that my name was spelled correctly, the pictures were of me (except where they paid a model to sleep next to a lap top), that I couldn’t afford to do mailings and that the first rule of marketing was not to mention the competition by name. Rhine never caught on that I was actually trying to help her improve her campaign. When her signs went up on all the vacant lots I asked the guy who put them up if he understood the subliminal message he was sending. After a week the signs were still on vacant lots so we made a video about it and included the picture of her signs under the “Wrong Way” signs on Steve Whalen Blvd. Since they had no concept of subliminal messages we put up those “Had Enough” signs that matched her colors and mirror imaged her background. They spent the last week moving her signs away but I had some 500 people on Facebook that I informed of this phenominum and within hours my signs were moved next to hers again. They were moving signs while We were knocking on doors. Her campaign manager told me a year later that he still had nightmares about those signs because he was up every morning at 5 am moving them and by 5 pm mine had all been moved back. As for endorsements, they only have value if they come with money or feet on the street. Since most come with neither I don’t waste time seeking them. Interesting times. Maybe I should write a book ……