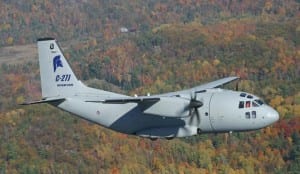 If you wonder how our military budget is the largest in the world, it’s because politicians get involved protecting their babies. In the world of military programs all politicians are decidedly pro-life if they have a piece of it in their state.

The C-27 is an attempt at a smaller version of the venerable C-130 Hercules which has been one of the most reliable  aircraft in our arsenal. When comparing the two– it appears that there are marginal differences where the C-27 is more useful than a C-130. At this point, the $2.2 billion purchase contract is probably going away. You probably can guesstimate that to even get to the point of the contract- the U.S. spent at least $2 billion agonizing over the plan- which started in 1995 with the contract awarded in 2007 for 78 planes.

We won World War II in about the number of years that we actually had the plane before it was cancelled. During that time we not only from scratch came up with planes like the B-29 Superfortress, the P-61 Black Widow and the P-51 Mustang. We built thousands of planes and won the war. Now, we can barely deploy a plane in 20 years.

From the Dayton Daily News- remarking on how WPAFB has come through the  budget-cutting process “relatively unscathed” we even quote a taxpayer-supported illegal  lobbyist, referred to as “Michael Gessel, a Washington-based vice president of the Dayton Development Coalition” as a reliable source:

President Obama’s 2013 defense budget, released on Monday, appears to leave Wright-Patterson Air Force Base relatively unscathed as the administration gets started on $487 billion in defense spending cuts over the next 10 years….

“From what we’ve seen of the budget documents released so far, Wright-Patterson seems to be facing level funding in the next fiscal year, under the president’s budget,” said Michael Gessel, a Washington-based vice president of the Dayton Development Coalition. “Of course, Congress can and does change some of these numbers.”…

Republicans have said they think Obama’s defense-spending reductions will undermine the military and its current capability to fight more than one war at once. Obama has said his goal is to build a smaller, more agile and technologically capable military ready for future warfare.

Still, Congress required the $487 billion in defense spending cuts over a decade, as part of the Budget Control Act enacted in 2011….

“Our nation needs Washington to demonstrate some courage with a budget that honestly addresses the near- and long-term challenges we face,” Boehner said. “Instead, the president offered a collection of rehashes, gimmicks and tax increases that will make our economy worse.”…

The administration also proposed to cancel the C-27J, a twin-engine turboprop cargo plane that the Defense Department had said in 2007 would provide a needed airlifter for both the Air Force and the Army. Because the Ohio Air National Guard’s Mansfield base is home to C-27Js, Ohio politicians are concerned about the future of that base.

A squadron, btw, is typically 4 planes. To make matters worse, the C-27J is yet another attempt to solve a general’s wet dream of having a cargo plane be a helicopter. The V-22 Osprey fits this category- and has cost U.S. taxpayers billions and too many Marines their lives. That program also started at $2.2 billion and now has run over $27 billion and estimates call for at least that amount again to complete the program.

We could have bought a lot of semi-disposable helicopters instead. The venerable Bell Huey which served as a work horse in Vietnam cost about $5 million each, the cost of the new version, the Sikorsky Blackhawk, $6.4 million each. Each C-27j is $53 million for comparison’s sake. We used to just drop combat engineers in places to build big enough airfields when we needed a plane to land, now apparently, we still seem to think a different plane is the answer.

War is no longer like chess. It’s not waged symmetrically. It took 20 people to hijack four civilian airliners to start the current wars, not billion-dollar bombers or multi-million-dollar cargo planes. The new world order isn’t going to be maintained by a bigger military hammer, but through smaller, unconventional forces trained in special operations. Diplomacy isn’t improved by bombs and bullets, but by smarter use of all of our resources to build peaceful relationships.

Al-Qaeda won’t go away because we have a C-27, or a V-22, it will go away when people across the planet hate someone else worse than America, or they become hated more than us by the people around them.

If we want to solve the budget problems, we need to stop trying to turn all our chess pieces into Queens at a cost-is-no-object price tag and learn to use what we have available more efficiently.

The C-27 program is doomed. Anyone talking about saving it, or putting more money into the short takeoff and landing cargo plane category should have their heads examined. The answer isn’t a different plane, it’s either a helicopter or a longer, better runway- live with it.

When you read the paper and see politicians and lobbyists defending our defense spending, it’s your duty to do your homework, because, our politicians are all dependent on donations from these defense contractors. That’s why I’m running for Congress and work so hard trying to deliver the facts you need to make a good decision.

The next question is why we need an air wing in Mansfield in the first place? It’s a transport squadron right? Shouldn’t they be able to fly planes from WPAFB to Mansfield to pick up the troops for drill weekend in their C-130’s and hold drill here?

[Note: go look at any other candidate’s website for the OH-10 including Congressman Turner for a position on this issue]

I wrote this article on Feb 14, 2012, on Feb 18, the Dayton Daily News started promoting a Sunday article by John Nolan about “Mission Aborted” featuring the C-27J debacle, story not available online, without giving me credit for either the headline, or the questioning of this military program that Congressman Turner voted for. Here is the ad they ran in the print edition yesterday 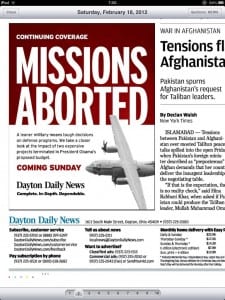 “…we even quote a taxpayer-supported illegal lobbyist…”

@Bobby- the Dayton Development Coalition accepts public money, is treated like a quasi-public organization- and hires Michael Gessel- a registered lobbyist. While the claim is that the DDC doesn’t co-mingle funds, they proved their incompetence by hiring our congressman’s wife to do work for them, no bid, on a contract that was wildly over priced.

Mr. Esrati is the only internet moderator in the Miami Valley who allows  thoughts to contend beyond a pale of vetted cronies. He asks uncomfortable questions to the self-satisfied mandarins who control public and prvate Dayton.   Diogenes smiles upon you Mr. Esrati.

The Air Force has grounded its fleet of C-27J transport planes, operated by state Air National Guard units, while it investigates the cause of a flight control problem that hampered a training flight of one of the aircraft last week.

The C-27J program office of the Aeronautical Systems Center at Wright-Patterson Air Force Base ordered the precautionary suspension of flights involving the aircraft while the Air Force works with the plane’s prime contractor, L-3 Communications, and the manufacturer, Alenia Aermacchi, to identify and resolve the problem.

“We don’t know how long the stand-down will last,” Stefanek said.

Do you feel less safe- knowing that we can’t land on 1% of the worlds airfields now? Please remember, US Paratroopers and even “Air Mobile” troops can still land anywhere- all without the C27-J

Which middle class do we protect?

And the planes were delivered straight to the boneyard:

New cargo planes on order for the U.S. Air Force are being delivered straight into storage in the Arizona desert because the military has no use for them, a Dayton Daily News investigation found.

A dozen nearly new C-27J Spartans from Ohio and elsewhere have already been taken out of service and shipped to the so-called boneyard at Davis-Monthan Air Force Base in Tucson. Five more are expected to be built by April 2014, all of which are headed to the boneyard unless another use for them is found.

The Air Force has spent $567 million on 21 C-27J aircraft since 2007, according to purchasing officials at Wright-Patterson Air Force Base. Sixteen had been delivered by the end of September.

The idiots in Congress

[…] I’ve heard people suggest that picking 535 random Americans to go to Congress would probably give us at least the same level of incompetence as these idiots we have. WYSO did an interview with Congressman Mike Turner- who when asked if he would donate his pay- told the interviewer he was working and dodged the question. His main concern was getting people back to work at WPAFB, where of course, they spent our money buying the C-27J which the military didn’t want, so that brand new planes are now being delive…. […]