Nan Whaley hasn’t been looking so hot lately. Ever since the indictments by the FBI and the DOJ where they said Dayton had a “culture of corruption” she’s been looking haggard. At least after the tornado she had the excuse that she didn’t have any water to shower, but, when you realize that a lot of people didn’t have water, it’s time to stand back and take a look at what’s really going on.

We now know that Commissioner Joey Williams didn’t resign because of his job. It was because the FBI told him he’d have to. Yes, for over a year, Commissioner Williams has known he was going to get indicted, and probably longer. This was part of a deal he cut so that he could make sure his younger son could graduate from Stivers before he’d go to prison. As part of that deal, he agreed to wear a wire. That’s the real reason the Mayor knows her days are numbered.

She’s no longer concerned with her political career that she’s scrapped for since being a mediocre student at UD, where the Montgomery County Democratic Party gave her a future she could believe in. They are a breeding ground for back-stabbing, provincial, small-minded narcissists whose first rule is self-preservation and a guaranteed paycheck for their friends and family. It was the perfect place for her to prosper. I mean where else can someone hire their convicted rapist brother for a job without getting in trouble? Yes, this really happened: Government job- no posting required?

The party that still fails to acknowledge some elected Democrats as elected Democrats because they weren’t insiders. The page that used to list their friends who were elected has been taken down, as has any meaningful content, maybe because this issue has come up too many times in central committee meetings (full disclosure- I’m an elected precinct captain, and am amazed that my name appears on the site at all). Two that come to mind- Dayton City Commissioner Darryl Fairchild, who beat the party candidate Daryl Ward to take over the seat Williams vacated and Trotwood Mayor Mary McDonald.

Which brings me to the “Real Mayor of Dayton” title. It’s not Nan Whaley, who’s facebook feed consists of a few official statements- and a photo of her hob-nobbing with Sherrod Brown when he came to look at the tornado damage. 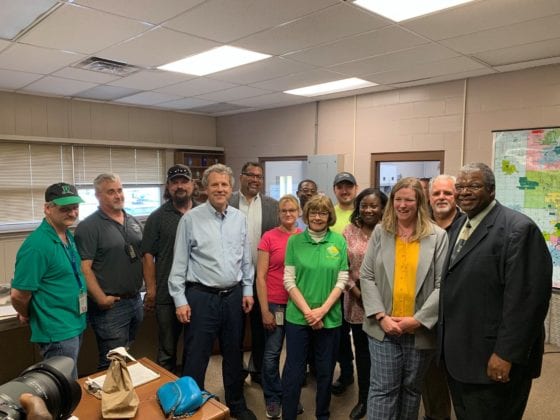 After tornadoes hit Dayton, Nan Whaley (third from Right) is hanging out with Senator Brown (4th from left) and her union supporters- in an office, while…

While Mcdonald’s facebook feed is full of her out in the community, looking as put together as ever, walking and talking and helping coordinate the relief effort.
I’ll also point out that Trotwood’s Mayor is paid about 20% of what Dayton’s is, about $10K vs almost $50K.

But wait, there’s more. While Whaley has failed to clearly communicate things as simple as what the high vs low areas are for the boil water advisory, or admit what happened that half a million people lost water because she wasn’t smart enough to call the National Guard to ask for generators, and while cleanup is still going on in the parts of Dayton devastated by the tornado (Old North Dayton), Nan’s focus is absolutely clear- she’s getting ready to hobnob with the husband of presidential candidate “Mayor Pete,” Chasten Buttigieg, who is coming to an undisclosed location today to collect big money from the Dayton gay community and anyone else who has $100+ to donate.

You can hobnob with Mayor Grifter and the gang before she gets indicted tonight.

And goes on to list donation levels starting at $2,800 and going down to $50 for “young professional” (but all those slots have been taken).

Kery Gray is Nan’s retired former flunky, who used to be Rhine McLin’s errand boy (he was the one who called the bomb squad to McLin’s campaign HQ which he was visiting on city time to pick up the mail for her campaign). Josh and Brent are the owners of Square One Salon, Robert Klaben is an owner of Morris Furniture and brother to disgraced WSU board member Larry Klaben, Lisa Hanauer sold her medical document management business to Reynolds and Reynolds, and Paul Woodie is the former planning director of Dayton who went on to work for Premier Health to fix up the neighborhoods around their properties so they wouldn’t be surrounded by slums.

Gray may also be facing indictment for helping “friends of Nan” have access to internal city bid documents before bids were due among other things. After the first round of indictments, all of a sudden lots of people were willing to talk about the travesties they saw while working in city hall, where Nan was directly involving herself in contracts and procurement.

A sample of the information I’ve received from a high placed employee in City Hall:

A meeting was hosted by the City Manager at the Mayor’s direction.  Nan brought in 12-15 people from a vendor/campaign donor  and the City manager brought several department heads.  Dickstein kicked the meeting off by apologizing for the Mayor’s inability to attend because she’s SO busy with so many more important things and then, “oh wait, I heard a door – and those sound like her footsteps, let’s wait a minute – maybe she’s able to join us after all!”

The Mayor walks in, thanks everyone profusely and apologizes for not being able to stay long, but realized how important it was for her to welcome her guests, she’s so pleased we’re able to meet, so grateful to Shelley for hosting at her request and to the company for being so committed to helping the City.

She then went around the table and had each department head list their BIG upcoming projects and their estimated value (the source says they still remain shocked) – Aviation, Water, Public Works, talk about their big budget items.  At that point, Mayor grabs the back of a department heads chair,  starts shaking the chair forward & back & says ‘Great – well, that’s great guys!  So, it seems there will be lots of opportunities that you guys can help us out with & we’ll definitely be doing business together…”

Another high placed source tells the story of a major engineering contract being steered to an Indiana company that had hired Nan’s former babysitter (yes, at one time, Nan was a little Whaley) who was her Mom’s best friend- to spearhead their efforts to sell to the city. Gray, working in the Mayors office, was sending internal cost estimates to the vendor in advance.

My first cited source says bid documents were routinely manipulated to exclude even local businesses from bidding on large contracts. Dayton based Lion Apparel, maker of fire fighter turnout gear suffered from this process. While feeling slighted, knowing they were being sent a message, they chose not to fight the bid specs with a protest, because, well, that pretty much precludes you from doing any future business with the city because you didn’t pay to play.

The crazy thing is that the company founders tossed in big money on Nan’s signature move- the issue 9 levy campaign, where 150 donors tossed in an average donation of $1873. Yes, apparently someone in city hall didn’t realize that Richard Lapedes and Maureen Lynch with their $2,500 was from Lion Apparel. In case you missed it- all the donors were people or companies that benefit greatly from these kind of “good relationships” with the Mayor and her meddling in contract awards. We’ll have the annotated donation form for you soon, it’s absolutely fascinating (of course the FBI has it too- and may be visiting a lot of the big donors as you read this). The rest- were city department heads or managers who were donating to keep their jobs. Yes, that’s the way Nan rolls.

Too bad she can’t pull that kind of forced donations leverage to Mayor Pete’s campaign shindig tonight. And, btw, if you think she’s spending any of her own money to be a title sponsor you’re out of your mind- that money is coming straight out of her campaign war chest, grown fat through her steering of contracts to the friends and family.

All that aside, the real Mayor of the people is Mary McDonald who is doing the City of Trotwood proud. They are lucky to have such a selfless servant leader.

Instead, Dayton got stuck with Mayor Grifter.

If you enjoyed reading true breaking news, instead of broken news from the major media in Dayton, make sure you subscribe to this site for an email every time I post. If you wish to support this blog and independent journalism in Dayton, consider donating. All of the effort that goes into writing posts and creating videos comes directly out of my pocket, so any amount helps! Please also subscribe to the Youtube channel for notifications of every video we launch – including the livestreams.
Subscribe
5 Comments
Inline Feedbacks
View all comments

Yeah, the Mayor has been looking pretty haggard lately and even more so after the tornado. It’s embarrassing to see her representing the City in these press conferences. She couldn’t answer any of the questions thrown at her. At the Tuesday morning conference, as they were leaving the podium she said “Don’t do anything stupid” as she stepped away. While I understand her sentiment, I do think she could have chosen better language to voice it.

Interesting, and too bad, about Joey’s deal.

Both are right about the Whale and her worsened, deranged look since the Feds marched in. The only time she looked worse was > 12-15 yrs ago before she underwent bariatric surgery to reduce her whaleness. (OBTW: long term, no worky. : / )

Was always suspicious of Joey Williams. Some thought he was a good guy but he had another side some were well aware of. SOB wore a wire–> Rat; add that to his profile.

This is gonna get reaaaallllll very soon.

Anyhows, another great article that goes where the local POS rag DDn never goes, into the dark, deep, ugly culture of corruption well known to most Daytonites.

David mentioned the photo op picture in today’s post. I meant to comment yesterday just how thrilled some of those people look to be in the picture. Especially, take a look at the 3 guys on the left! They look like they’d rather have a fork in their eye than to be in that picture!! LOL!

FWIW: copied from DDn after JW announced his resignation from the Commission:

“Williams said he ran for re-election last year expecting to complete his full four-year term, but his work responsibilities have grown so much since being named the new Dayton market president of KeyBank. KeyBank publicly announced his hiring about two days after the election.

Williams said he quickly realized that the amount of travel involved in his new role would be difficult to juggle with his commission duties.

He said he typically missed a few commission meetings each year. Since November, Williams said he has been missing at least one meeting each month.

“It’s really not fair to the community if I can’t put the proper time and effort into the job,” he said. “I had no idea this job was in my future.”

ALL LIES AND THE GUY GOES AROUND W/A RAT-WIRE IN THE MEANTIME.

Can’t make this stuff up

and the rest of the Williams corruption story | Esrati