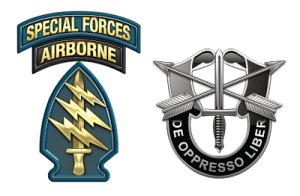 The United States Army spends at least a million dollars on every guy (and yes- it’s still a guys-only club) they train to wear a green beret. Don’t get caught up in the Rambo fantasy- the Special Forces isn’t the same as SEAL Team 6, Delta, the Ranger Battalions or Marine Force Recon.  Sure- they can go in and do amazing damage relative to their size- since they are highly trained, well equipped and typically well supported, but direct action isn’t their main mission.

Their main mission is to train and organize others to go overturn their government, or to keep their government in power- depending on which way the political wind blows.

Send in an A Team of 12 guys (no, it’s not anything like the “A-Team” TV show either) and out should pop a well trained, organized and equipped group that’s anywhere from Company to Battalion size – depending on where and what the team is given to work with. Translation- give them a literate group of French young men behind German lines in WWII (pre-Special Forces example) and you could have a team easily run a battalion- give them a bunch of semi-literate dope farmers in Afghanistan- and they’ll be lucky to have a few effective squads. Garbage in- Garbage out.

We have no problem at all sending these men all over the globe to “take care of problems” in third world nations where elections are non-existent or questionable, or where “civil rights” are being violated, or where plague and famine are winning a war caused by poverty and disconnected economies. We’ll even send them on humanitarian aid missions- where SF medics do dentistry and demolition guys blow up things to make damns, or set up water purification systems.

My question to you- is at what point is some other country going to look at our country- at Ferguson MO, or the latest shooting of a black kid with a pellet gun, and decide to send their Special Forces here to organize the disowned underclass to rise up and fight? Sounds crazy right? What makes it any different when we do it in places from as far and wide as Nicaragua to Somalia? Liberia to Libya?

And, why do we think that one day, one former Green Beret isn’t going to decide to do it in his hometown?

I look at the insane peaks of the U.S. stock market- and know that the company’s values aren’t rising because of higher real wages, higher real employment, higher standards of living, a better or stronger economy- and think, didn’t we learn a damn thing since 2009- or even since 1928?

Is the real reason “Black Friday” sales were down because you could shop on Thanksgiving? Or is it that people sense something isn’t quite right- and it’s not just riots, gas prices swinging, or temp jobs pushing numbers in the right direction.

All those people who laugh at “preppers” stockpiling water, fuel, guns and ammo? Do you really want to bet on you an economy built on lies anymore than a democracy that’s elected by a minority well schooled in stupidity?

When the mountains of cash printed and shoved into the economy for the rich to use to fill their bank accounts, which then purchase the best politicians money can buy, all become semi-worthless (which is what typically has happened when money supplies grossly outstrip the actual needs by real users of it)- you end up with the only real value being in things needed to survive: clean water, fuel, food and bullets.

We are not facing a zombie apocalypse- which is made up of mindless dead people roaming the streets- we’re waiting for the mindless sleepwalking wage slaves to wake up and demand to take back the streets.

You are free to return to your holiday cheer. Don’t say you’ve not been warned.

note: For the record, I don’t think most preppers really have a clue on how to survive. I lay better odds on those who live in a tight-knit community, than any people thinking they will make it alone. Also, while I only served with Special Forces units while in the Army and the Army reserves, I never completed the Q-course. I have never served in a line unit- or with anyone who wasn’t at least a paratrooper. My official Army MOS was 05B-1A4P, which means I’m a radio operator, who knows morse code and is Airborne qualified.  I  served on an A-team for over a year in the reserves while in college. I have the utmost respect for the training, the mission and the Beret.

Long ago I was Regular Army, May 56-Sep 62, Korea Nov 56-Feb 58, over two bitterly cold winters. Yep…I’m a REAL Winter Soldier, unlike 93% of Americans who never served a day in our military services. Hated Korea. The stories I could tell… Honorable discharge after beginning of Vietnam Era. Only those who served post-“armistice” knows the REAL Korea after that so-called “cease fire”. This was my favorite of your musings. Might reveal the truth of what our government suppressed back then in my next book. Now learning how to self-publish digital version of a now completed book on Amazon. Really like all of your 30 November posting and, at least in your comments therein, we are on precisely the same page. YOU GET IT! -Dr. Kent, 1 Dec ’14

I think it’s time to sit back and sip some good Scotch ole boy. I wouldn’t want to be reading about you doing the Ninja thing again with this mindset. Stand down. Go easy.

“And, why do we think that one day, one former Green Beret isn’t going to decide to do it in his hometown?” – David Esrati

So, is this your plan? Or are you just becoming a prepper?

Bubba- I’m too old for worrying about this. When it comes, it will be just like survival school all over. If I was a bunny rabbit- I’d stay far away from me, same goes for any chickens.
Besides- y’all know the only time I get selected to lead is after everyone else figures there is no one else…
and, I never completed the Q course- so- it can’t be me.

Great points. I’ll go ahead and enjoy the holidays just because I know how fragile our lifestyle is. Of course I prepare for bad times, but knowing they could descend on us at any time makes me appreciate the times we have now even more.

The people are in denial what is happening before their very eyes. This goes to show this is one more warning and wake up call. Just take a look around at the voter turn out here in little Dayton Ohio and I do not need to expand upon it and how out of touch, not just here but the rest of the country.

They are winning by instilling fear and intimidation to silence the masses. The arrogance is at all time highs as these officials believe they are the “untouchables” they know what is best for all of us. Perhaps when their world comes crashing down they will make it to our level and it will not pretty when the time comes, sooner rather then later, hopefully I am wrong but the writing is on the wall, the signs are everywhere, diversion tactics to conquer and divide is the norm;do not let this happen to the greatest country, stay united, strong and with conviction and no I will not run the other way; bring the special forces and it will not be just prepping! It is the reality of the situation and circumstances of out time in the republic!

I think the cold weather makes the world seem a bit harsher, and causes some of us to ponder “what if…..?”

It’s popular to predict that we are at anarchy’s doorstep, but I have to disagree. Even if we have severe economic problems, we’re still a nation filled primarily with men and women of good will.

I live in rural Greene County. Out here, the chances of finding a gun in any randomly selected home are about the same as finding a carton of milk in their ‘fridge. I feel that the mayhem portrayed by many SHTF books and movies is mostly bunk. Yep, there may be a bit of looting and other unsavory activity, until the risk of getting a gluteus maximus full of 00 outweighs the potential gain. And we have LOTS of guns and ammo out here.

Some people will always behave badly (check out any Walmart during the holidays) but the bulk of the population will settle down and get busy cleaning up the mess, restoring order, and taking care of one another.

I wonder if they make a shotgun rack for my Honda Civic …..?

Hey, on subject, wanted to let all the South Park (and other) folks know that we have a hometown survival supply and Emergency Preparedness store that meets a lot of needs — you can come here and not worry about jeers, rolled eyes, or jabs. Speak your mind.

Omega Survival Supply, right across from the new Coco’s. Thanks for the great site, David, and for putting up those nets.