Sometimes life has a strange way of colliding. I’ve wanted to see a Zoot Theatre Company production for a long time. A local troupe, run by a looming Englishman with a poetic kindness in his voice, they use puppets to tell the story, with the actors swathed in black from head to toe- including covering their faces (not welcome at the Dayton City Commission meetings). With moving tabletop stages, projected images, and eight puppets and a cast of twelve (many of the times it’s two to a puppet), there is a flurry of bodies moving on stage making the story come to life.

The story yesterday was “And a child shall lead” written by Michael Slade, an emotionally taxing look at the Holocaust through the eyes of children- and the coping mechanisms they created to make sense of a world that made no sense. From the Zoot site:

This is the true story of children coming of age in Terezin, the “Jewish city” established by the Nazis as a way station before the death camps. In the face of unspeakable horror, these children use their determination and creativity — playing, studying, making art, and writing an underground newspaper — all at the peril of being executed. Their actual poems and stories are woven into this fast-paced drama.
On Sunday, April 14, noted Holocaust historian and expert, Renate Frydman, Ph.D. will discuss Terezin and very personal stories passed down through her family and the horrors directly experienced by her late husband, Charles Frydman.

via And A Child Shall Lead.

Today at 2 p.m. is the last chance you will have to see this amazingly thought-provoking play. If you don’t have plans at 2 p.m., I highly recommend it. They are performing in one of Dayton’s gems- the Dayton Art Institute’s incredible auditorium, which was beautifully restored about a dozen years ago. Tickets are still available. 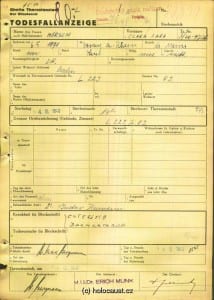 But a few hours before the show started, a piece of my ancestry rose up out of the Internet to make the viewing of this show even more personal. My father, 86, who was born in Berlin and left at age 6 in 1933 to escape Hitler, found his grandmother’s death certificate. She died in 1943 in Terezin. The Germans are meticulous in their record keeping, my father had previously found the complete inventory of several relatives’ apartments/homes being emptied, where everything was listed and valued, but he had always assumed that the final indignity of death at the hands of the Nazis wouldn’t be found. With the help of a researcher in Israel, they found the documents in the Czech Republic archives.

It says she died of “food poisoning” which is like saying a gunshot victim died of blood loss and ignoring the bullet.

This is how humans justify doing the wrong thing and make it palatable. Words are important. Semantics matter.

Of course, some of you are figuring out for the first time, “What? Esrati is a Jew.” The last name sounds Italian, and it’s something I don’t often waste time explaining. I don’t think religion is something that needs to be discussed any more than sexual preferences, but that’s me. The spelling of my last name is unique, there are only three of us on the planet that spell it that way- my parents, and me. It was translated from Hebrew, into the English alphabet by way of German pronunciations by my grandfather. All others have spelled it “Ezratty” or “Isardi” or some sort of variation on the two. But, the name is only three generations old- My father was born “Hirsch”- and it was only once they escaped Germany and arrived in Palestine that they decided to change it to a non-German name. My father liked the name of the washer woman, and they adopted it- leaving the German behind.

And, on the death certificate, you will find another oddity of the Nazis- my great grandmother had no middle name. The Germans added the Sara as a first name for all the Jewish women and “Israel” as the men’s. Just to make sure they knew you were a Jew.

My father sent an email out to his surviving friends yesterday:

My father’s mother visited us twice in Tel Aviv when I was a kid. She insisted on going back to Germany, saying, “Who would hurt an old lady?”

She was murdered in the Theresienstadt ghetto in 1943. At first, I was told she had been purposely starved to death. Today I got the official German death certificate.

(I did not know there were such things.)

It gave the cause of death as enteritis (food poisoning).

She was born in a Dutch-speaking area of Germany, near the Rhine, and loved chocolate. I remember going on walks with her and she always bought Flake, a British chocolate that you could crumble on your bread to make a chocolate sandwich.

Seeing that death certificate, complete with signatures of several doctors, brought the Holocaust home as nothing had ever done before — and I had been in Bergen-Belsen, Buchenwald, and the South Camp at the Ljubelj Tunnel.

Note, Theresienstadt and Terezin are the same place- “Stadt” is German for city- and the translation spelling is a matter of preference.

I remember him telling me about how she spoke a combination of Dutch and German- very guttural, and that he was always surprised at how he could understand some Dutch- even 40 years later when we were visiting Europe when I was 16. It was on that trip my parents visited the South Camp, I had no desire to walk on the grounds where evil was done and sat in the car and read. To this day, I still am deeply adverse to visiting places where man sank to the unimaginable depths of hell. Even the traveling Vietnam memorial scaled wall causes me to feel distraught. Futility is something that I’ve never accepted well- which may be why I continue to run for office.

Yesterday, I wrote about the teacher in Albany who may be fired for asking his/her students to write an essay explaining to their teacher that Jews were evil. I believe this teacher had succeeded in a teachable moment. The Zoot Theatre company gives you an opportunity to see the horrors of the Holocaust this afternoon, through a lens that makes it more real than any text or film. I urge you to go if you possibly can. I’ve read Viktor Frankl’s “Man’s search for meaning” which was recommended to me by Martin Sheen over dinner at his brother John’s house. This play made more of an impression. Go this afternoon.

Tell them Clara Hirsch sent you.

Dave – your post is both powerful and deeply tragic. The lack of comment from your readers is telling….the Holocaust is still a subject that most people avoid discussing. It’s uncomfortable, disturbing, and depressing.
——-
Thank you for sharing this. Genocide still occurs, and being squeamish about discussing it openly and with specificity gives the perpetrators the “night and fog” that the Nazis found so helpful.
——
Let’s pray for Sara Clara Hirsch, and for the millions of genocide victims that preceded and followed her.

@Dave C. For the life of me- I’ve never known which posts will generate discussion. Yes, this is an uncomfortable topic. Kudo’s to the Zoot Theatre company for engaging in the difficult discussion.

The propaganda film about Terezin – is still there for all to see. Just like the nightly news- we all have to use our brains and dig a little deeper-or risk being part of the problem.

Thank you for your prayers.

Of all of your post that I’ve read and scanned this is the best. I can’t add anything to your words except to compliment them.