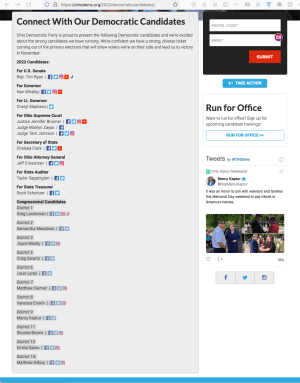 Only missing a few congressional districts

The page title is “Connect With Our Democratic Candidates – Ohio Democratic Party” and then it goes on to list the congressional candidates:

In case you don’t know, Ohio has 15 congressional districts-  the party lists 11. Missing is Jim Jordan’s opponent, Tamie Wilson in District 4. This is a district drawn to guarantee Jim Jordan can always win.

I’m missing in District 10- you can find my campaign site at www.electesrati.com This district was recently redrawn to be slightly less Red than before and would be winnable if they only had a candidate that kissed their ring. The problem is for the last 20 years, the local parties have absolutely failed to develop a good base of candidates and supported them properly to win.

In District 12 there is a woman named Amy Rippel-Elton who only has a Facebook page. She’s running against Troy Balderson, who used to be a state rep and then a state senator, but was elected to the U.S. House in a special election on August 7, 2018, replacing Patrick Tiberi (R). District 12 is one of those bizarrely drawn districts that only a Republican could love- it includes the area North of Columbus as far up to Mansfield and East into Zanesville. The district is solidly red.

District 15 was represented by Republican Steve Stivers who resigned May 16, 2021 to become the head of the Ohio Chamber of Commerce. Includes the part of Fayette county that used to be in 10. Gary Josephson is pitted against incumbent Republican Mike Carey who assumed office on November 4, 2021 after beating Allison Russo 58.3% to 43.7% in a special election. Carey doesn’t seem to have any previous political experience but is an Army Veteran. This is another strangely gerrymandered district- comprised of 12 counties, including: all of Clinton, Fairfield, Hocking, Madison, Morgan, Perry, Pickaway, and Vinton counties and parts of: Athens, Fayette, Franklin, and Ross counties.

Josephson doesn’t seem to have a website. There’s a bit of an old Facebook page from when he ran for State rep in district 25. Apparently we share growing up in Cleveland Heights, as did Darrell Issa who was Mike Turner’s best friend in the House until he wasn’t (something to do with the Turner’s divorce from a lobbyist).

It would seem the Ohio Democratic party, if they truly believed their job was to help elect Democrats, would at least have the courtesy to list all the candidates on their website- and to provide some technical assistance to those who aren’t showing capacity.

This is how you build your base, constantly supporting the candidates you have, and developing new ones.

In fact, my ad agency would be happy to help these other candidates get set up with websites, campaign materials, and help with strategy. Something the party can hire us to do.

While the Dems keep fighting the redistricting committee, hoping for better districts, maybe it may be smart to start teaching voters how they’ve been manipulated and to send a message- vote for these folks. No one can be worse than Jim Jordan- the insurrectionist traitor who doesn’t believe the election that put him in power was legitimate. C’mon Ohio Dem’s- your last excuse was Friday, when the election results were all certified.

Thank god the GOP is smart enough to draw successful districts. We can’t afford idiotic Democrats ruining our state. The good news is gadflies like Esrati don’t stand a chance to screw up Washington.