The City of Dayton has a bad habit, it likes to buy real estate with no public use in mind. It’s not just the two buildings in Webster Station– it’s all over the city. And it’s been going on for a long time.

Duane Jack was a self-styled real estate developer who lived in South Park around the turn of the century (1999). He had grand plans, and was looking at projects in Nelsonville and the Fort Piqua Hotel- which is now an amazing library. He stumbled upon the heap of real estate owned by the city- and asked for a list. What he got back was a 4 inch high ream of green bar computer print out- with literally thousands of pieces of property. His first question was why. Unfortunately, he got divorced, moved to Cincinnati and never looked back. He came to mind when I saw the charts accompanying the article in the Dayton Daily News about the shifting tax bases in the four local counties. 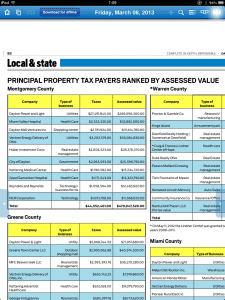 Note, Dayton is the only government entity on the list?

Health care, retail and real estate management companies are rising to the top of property tax bases in Greene, Miami, Montgomery and Warren counties compared to a decade ago, when factories dominated the economic landscape.

Transformation of the Dayton-area economy from manufacturing to more service-oriented industries has driven up property tax collections in some counties, while others struggle to adjust to the loss of tens of millions of tax dollars.

“Its sort of the reality around here,” Wright State University economist Thomas L. Traynor, professor and chair of the Economic Department said. “Property taxes are lagging indicators of what is happening around the region. Yes, we’re an economy that used to support big manufacturing that doesn’t exist anymore.”

The Dayton Daily News examined the principal property tax payers in the four counties to determine the types of businesses anchoring the property tax base in 2011 compared to 2002. The data came from the Comprehensive Annual Financial Report released by each county auditor in 2012.

The strange part was the line including Dayton as the 6th largest holder of real estate, with $25.5 million in assessed value and slightly over $2 million in taxes that we are paying- mostly to the county. Also note, the DDN didn’t point out this oddity of the City being a major land owner.

No other government owns enough to make the lists. The real question is why? Do we live in a socialist state where the government owns everything? Is it all necessary for the health and welfare, or serve a true public use?

How much of this is because of the quasi-public slush fund known as Citywide Development? You know the one, it builds brand new office space to compete with the private sector and then rents it out dirt cheap to undercut those of us who pay our own taxes- and to add insult to injury, also gives grants and preferential contracts to companies the city feels the need to prop up (Persistent Surveillance Systems with their $1000 an hour spy in the sky system comes to mind).

Just imagine what the city could do with $2 million extra a year for police, and what we could do if we didn’t own $25.5 million in real estate that requires maintenance etc. Maybe we could have a city where private investors would want to invest because the city delivered top notch services. Naw, that would be too much like what government is supposed to do.

Isn’t it possible these holdings include parks, community centers, airports, convention center, golf courses and not just houses and buildings? Wouldnt you expect it from the largest municipality on the list?

@matt, trust me on this- the tax bill on the airports would be more than $2 mill a year. These are other properties.

What parcels is the city paying property tax on, and why?  In general, land owned by a government is exempt from property tax, so that’s confusing.

That would have been shortly after the creation of the first land revitalization laws (i.e. early land bank) and also around the time they were building 35 West, which was a massive real estate project for Dayton.

Besides the airport, etc mentioned above they also have a large regional water utility operation.

Not to mention the post-industrial fall out from GM leaving.

I get your point but just looking at tax value is misleading.