The reason I hate the City Commission holding illegal work sessions (the Charter doesn’t provide for them, they aren’t recorded properly, and city business is discussed outside the official one-meeting-a-week specified by charter) is that good input might be closed out. 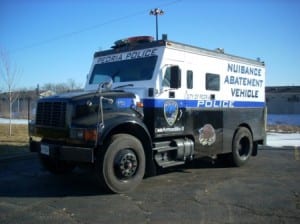 Discussing things online- in an open forum like this- allows for all to read and contribute. As part of the comments on my “What would Cory Booker do” post- the person who goes by “Civil Servants Are People Too” pointed to a great idea that Peoria instituted over a year ago to deal with nuisance neighbors- “The Armadillo”

A new, low-budget way to fight crime: Park an unmanned, former Brink’s truck bristling with video cameras in front of the dwellings of troublemakers.

Police here call it the Armadillo. They say it has restored quiet to some formerly rowdy streets. Neighbors’ calls for help have dropped sharply. About half of the truck’s targets have fled the neighborhood.

“The truck is meant to be obnoxious and to cause shame,” says Peoria Police Chief Steven Settingsgaard.

The Armadillo has helped alleviate problems like drug dealing that can make neighborhoods unlivable.

via Cops Use Old Brink’s Truck to Shame Suspects – WSJ.com.

And while nothing quite makes up for people on their porches, knowing your neighbors, and living according to neighborhood standards- when the neighbors are scared, there’s nothing like a bulletproof bad-behavior surveillance vehicle.

In fact, we could use it in front of 121 Bonner Street- where the police have visited at least a few times a week for the last two years. The residents are behind on their property taxes (they’ve never paid them since buying the house out of foreclosure) – and costing the taxpayers plenty in terms of constant police and ambulance runs.

While we have a fee structure for false alarms for security systems, we should also have an increasing fee structure for repeated police calls. More than 4 a year to a residence or more than 2 in a month- and the next one triggers a fine that’s appended to the water bill. If the water bill isn’t paid, water is shut off. If water is shut off- the house is ruled uninhabitable- and the residents must move within 7 days.

A listing of residents who’ve been forced out by these fines would be made public, and it would become impossible for them-to rent in the community.

Instead of tossing the footage collected by the Armadillo- why not stream it online? Believe it or not- people will watch- and monitor the feeds- and then have a way for them to mark the footage for incriminating evidence. Think of it as crowd-sourced enforcement. It’s how we can identify and hold bad actors in our community accountable.

We know at least the Mayor reads this blog. Will he forward this article to Chief Biehl? Will the Chief respond? Will Dayton get an Armadillo or two of our own?

Why is it so threatening for our elected officials to engage via social media on forums like this? How come they don’t have their own blogs where they can share their years of experience and knowledge with us on how to calm communities? Chief Biehl, we’re asking?

Thanks to the mysterious Civil Servants are People Too we have a tried and tested way to help the people of Pointview, so what now?

This is the dumbest idea ever. GEE, I would LOVE IT if a giant police state military like Transformers vehicle parked on my street. That would really help the home value. And of course, it would really help the problem move to another neighorhood, wherein’ the entire cycle starts again, because the people who make up the power structure in America are completely retarded, slobbering buffoons. Either that or they are amoral pigs.

Easy solution: end the War on Drugs which is a total lie, and forces our public servants to be hypocrites and liars, and people of low morals (although I seldom hear any of them complaining about having to take on this role).

The city is already in the business of regulating the most dangerous drug of all, alcohol, while if someone wants to grow their own weed (proven to be much less harmful to society and inviduals), we throw them in jail?

Does anyone else see the total lunacy of this?

Why don’t we just build a giant tower in Downtown Dayton with telescopes with Hubble-like power so we can spy the hell out of everyone and send the SWAT team down on their ass if they decide to consume drugs that are less harmful than the government sanctioned drugs. If that doesn’t work we should park a giant cruise ship in the waters of the Miami River near Island Park so that when a crack house pops up somewhere we can lob mortars on it.

Um, as the other property near the house you cite, I kind of really don’t want to see that parked outside. Sorry. You could easily be shaming the wrong neighbor this way.

I’m don’t think of the Armadillo as shaming- I look at it as a way to stop the drug deals that go on in the front yard. The buyers aren’t going to pull up and walk up to the house while it is there.

It also might stop some of the screaming of obscenities, the fights, and the car breaks ins we’ve had on the block.

If you want to stop drug activity, take the money out of the game. Otherwise, it’s just the same old tired act.

Nothing brought a nostalgic tear to the Old Man’s eye faster than a discussion of that epoch in American History known as Prohibition. When the drunken uncles and old friends made their weekend or holiday visits, the recollections of that era greatly outnumbered, for example, the remembrances of the shared sacrifices of World War II. And every single story concerning the Great Experiment involved bathtub gin, moonshine, the illegal but omnipresent watering holes known as speakeasys, and the Giants of Organized Crime. Even the Old Bandito’s otherwise law-abiding family was caught up in the production of alcoholic contraband. “We didn’t measure corn by the bushel back then,” Uncle Fred was fond of saying, “we measured it by the gallon.” A half century after legalization, the men of that rural town still prided themselves in their ability to distill quality corn squeezins, Of course, the increased demand for an illegal substance increased the price of hootch and vaulted such guys as Al Capone from street punk to wealthiest man in the world with a say in everything from politics to social policy, and enabled organized crime to entrench itself in the American fabric til this very day. Of  course, the incidents then mirror the prohibition against drugs today, with the same resultant disregard for law and enriching of society’s most cut-throat element. But what is unique today is the technology and the rise of the iron law of enforcement, which dictates that the more harsh the pursuit of the drug producers and users, the harder the drugs. The introduction of crack into the American underclass unleashed a torrent of violence and turmoil unseen even during the days of the Purple Gang, insofar as the folks in the 1930s did not have to rip off others to purchase their booze. Such is the lessons of a government sponsored Prohibition that America has somehow failed to learn……..

An alternative to eye in the sky- eyes on cops?

[…] is RICO funds can’t be used for man-hours, only equipment). I posted long ago about the “Armadillo” and brought up alternatives to aerial surveillance of all, like stop and frisk- which can have a […]

Let me update you on this..person at the address if something been done 2010 maybe the juvenile that lived there would not be a crook today… now my truck along with the Jeep this young man stole is totaled thousand of dollars in damages not to mention the horrible situation we are in because of it. No I don’t want our privacy invaded but I do want honest people to be protected for the crooks and drug crazies.. may be an old article but hey it helped me to see where it all began. Any of you know where this kid is hiding just let us know… we have a truck that needs replaced..