It’s legal for someone who has been on the terrorist watch list to buy an AR-15. Range is over 400 yards- think four complete football fields. The gun nuts talk about this weapon as crucial for “self-defense.” It can empty a 20 round clip, even as a semi-automatic, in under 20 seconds, accurately, in the hands of someone with good training.

You don’t have to be very brave, strong, smart or even very skilled in a crowded environment to kill a lot of people. I was trained in the military to use one, for war. Warriors have now come out against the sale of these types of weapons to the general public. These are weapons meant for a “well regulated militia” the forgotten part of the 2nd amendment. Gun nuts also quickly ignore the logical extension of the “right to bear arms” not including arms such as hellfire missiles, tanks and nuclear weapons.

My feelings about the 2nd amendment are fully explained in this video:

So when I went to the Federal Building on Friday to help my friend, the formerly homeless veteran Sean, I left my 2″ Swiss Army knife at the office, because they have a rule against carrying weapons in a Federal Building. I use that knife several times a day, to open boxes, to tighten screws, to open bottles, to cut down basketball nets etc. And while it is a “knife” and I could probably kill someone with it with a very lucky stab to the chest avoiding the ribs and getting to the heart and yanking hard, or carefully slicing both main arteries in the crotch, or the easy access ones in the neck, it’s still not that easy and it requires skill, speed and serious intent. Slicing someones throat isn’t as easy as Dexter made it seem (and he usually used surgical scalpels).

What I didn’t leave at home was a 1.5″ Swiss Army manicure knife that’s attached to my keys. 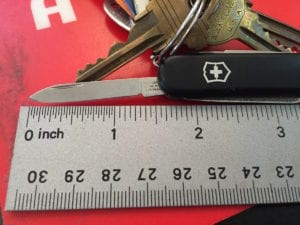 This isn’t a deadly weapon.

Nothing worse than federal marshals with guns making the law up as they go along. At the Dayton Federal building they made me it off the property to be able to access the building and the social security offices. As in they even suggested that I walk it across the street and conceal it somewhere in the alley for future retrieval. Of course, I protested, they already knew who I was because I also had to present a photo ID and most of them are former Dayton cops.

But, as always, I question authority, especially when it seems stupid. The FAA had changed the rules on stuff like this last year and I was pretty sure they weren’t taking away nail files, and sure as shit weren’t taking away metal barrelled ball point pens, which make fine tools to sever the jugular vein or serve as an emergency tracheotomy tube.

I go upstairs, whip out my phone and look up the LAW- and it says knives have to be over 2.5 inches.
I go back down to push the envelope. Asked to speak to a supervisor- after being threatened to be taken off the property for protesting my rights- and two guys acting like mercs, come out- one of them wearing desert jungle boots and an OD T-shirt, looking like he’s ready for action in Afghanistan.
I cited the law, which I had pulled up on my phone- they said they have “policy.”
That’s not the way this works fellas.
https://www.law.cornell.edu/uscode/text/18/930

Possession of firearms and dangerous weapons in Federal facilities

“(2) The term “dangerous weapon” means a weapon, device, instrument, material, or substance, animate or inanimate, that is used for, or is readily capable of, causing death or serious bodily injury, except that such term does not include a pocket knife with a blade of less than 2½ inches in length.”

We are a nation of laws for good reason. You can’t shoot someone in the back and say you were threatened under cover of law, oh, wait, I’m out of examples…

Cops who make their own rules are dangerous.

I have the name of the local supervisor, but instead, I’m going to push this up the chain of command. The reality is, this “policy” is just another way that those who are supposed to protect and serve, instead harass and discriminate at will. The fact that so many people are turned away from the Social Security offices by “security” personnel is a good reason to move that office out of the Federal Building into an office where the people can have full and unfettered access to their government (the guards tell hundreds of people a week, if not a day, to go to the office on Hoover that doesn’t require ID.

To serve and protect, means to adhere to the laws that are in place. Cops are never supposed to be judge, jury and executioner, they are supposed to be the epitome of the law.

No one elected these Marshals to make the law for good reason. It’s time that someone we elect step in to stop this chicanery in the name of security. After all, no one asked me to remove my shoes and we all know how lethal shoe bombers are.

I have lost a half-dozen or so Swiss Army “deadly weapons” to the TSA over the years, confiscated at the airport. Forgot I had ’em in my pocket.

These “deadly weapons” then show up on eBay, sometimes in large batches.

As scams go, this is pretty small potatoes. But it is still a scam.

Has any terrorist ever used a Swiss Army Knife to harm anybody?

You can’t have your cake and eat it, too. If you object to “shall not be infringed,” call a constitutional convention and have it struck entirely from the Constitution.

You’re not allowed to have “recording devices” in the Federal Building either.  Yet you can take in your cell phone with a camera and sound recorder.  It makes no sense, yet it’s “policy”.

I asked the Marshalls about it one day.  They agreed that it didn’t make sense but that they were told not to disallow people with phones from entering the building.  In the early days of phones with cameras, I had to leave my flip phone in the car.

I had to throw away a pretty decent knife at the Las Vegas airport one time.  Had put it in the checked bag on the way out there, forgot to put it in the suitcase on the way home.  One time at DAY I was getting ready to enter security when I remembered my knife.  I asked the ID checker if he wanted it as I didn’t have time to go back out to my car.  He said to take it to the USO counter.  I asked what they did with them and he shrugged his shoulders and said “they donate them to the soldiers, I guess.”  I went over the counter, explained the situation and the volunteer pulled out an envelope and a pen.  He told me to write my name on the envelope and put the pen in it.  When I got back home, the envelope was waiting for me.  I left the USO a donation worth more than the knife. :)

The FAA doesn’t allow metal knives either, according to their website. https://www.tsa.gov/travel/security-screening/prohibited-items  Look under the “sharp objects” tab.  They talked about this a couple of years ago, but the airlines kicked up a fuss so they backed off.  Something interesting on the TSA website…  “The final decision rests with the TSA officer on whether an item is allowed through the checkpoint.”  I’m glad that they give that much power and authority to those highly trained people.  Sheesh!

Keep us posted on your fight about this, David.

This assault on our Constitutionally-protected rights has to stop. Inch by inch we have become enslaved to sociopathic leaders. We need to wake the *%#! up and take our country back from the real perps, the Federal Government & by extension, local hacks.