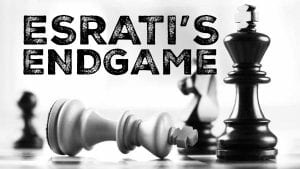 A friend was asked this week, “you know Esrati, what’s his end game?” and my friend had no answer.

Really, it hasn’t changed since I bought my crap house in South Park on Jan 28, 1986- the day the Challenger space shuttle blew up. Buy low, sell high.

Sure, my $14,500 house could sell for 10x that now. And my neighborhood is one of the few in Dayton that has rising property values. But, that’s not enough.

Dayton Ohio, as a city, hasn’t seen the same prosperity, and other neighborhoods are suffering. It’s why I set out to run for Mayor back in 1993, after experiencing the incompetence of the leaders who jack slapped me for installing the “wrong garage doors” on a “historic home” way back when.

All these years later, the same kind of fools think they know how to fix Dayton, and instead, keep dragging it down.

When I talked to Paul Leonard, the “Rock-n-Roll Mayor” of Dayton- who was leaving just as I came to town, he asked a simple question: “What happened to “be the cleanest, safest city in America”? And there you have it. We went from a simple guiding principal, to one of let’s pretend government knows how to do “economic development.”

We blew a ton of money on the Arcade back in the early 80’s- and are about to do it again. We built the tower next to the arcade with tax dollars- and then lost it. We built new schools, only to see them shrink and die. We’ve torn down old buildings, and made it impossible to re-purpose them, so that they become rotting reminders of what was once a boom town. We’ve raised taxes to support a patchwork of fiefdoms, that add no value at all to the community- with more police chiefs, fire chiefs, mayors, city managers and school superintendents for  half a million odd people- while the city of NYC with 8.5 Million people can manage with one each.

I could go on, with the quasi-governmental organizations, non-profits and end-runs around a system so convoluted no one knows who does what and why- many with tax dollar support, and zero oversight;  like the morons running the Metro Library system with $187M of your tax dollars- and no respect for your rights, or Sinclair Community College which is doing everything with Montgomery County money that it gets- to expand services outside the county.

Which brings me to my end game. It’s really simple. Uni-government, that’s run by people who are elected, not anointed in the bowels of political party HQs. A government that believes in good schools, safe streets, excellent services, equal opportunities and fair and equitable taxation and incentives.

It’s really not that complicated. It’s not utopia. It’s just not possible in this lifetime says my friend, who posed this question to me.

But, that’s the problem with Esrati. He’s wired differently and thinks “Yes we can.”

I’ve spelled out the framework for Reconstructing Dayton. And, hopefully, as soon as I get past these two lawsuits, and the primary this spring has enough people named to the Montgomery County Democratic Party Central Committee to stop being the party of patronage, we can get moving on undoing the stupidity of people who believe that you have to color within the lines drawn in 1785 when Ohio was formed by the “Northwest Ordinance.”

Who in their right mind wouldn’t like to see Greene County and Montgomery County join together and create a single government that has one set of courts, one police force, one safe jail, one zoning law, one tax collecting authority, etc etc. (other than all the micro-minded people “working” in micro-fiefdoms like Moraine, Clayton, or Oakwood- don’t get me started on the urban township tax dodges).

Go look at the growth in Columbus, Cincinnati and even Cleveland- and ask why isn’t it happening here? This city has so much going for it- yet, we can’t get past all of our personal prejudices. We’re still as racially and economically separated as ever, we have people living in poverty for no good reason, and jobs and industry are passing us by. We used to build things like trucks, refrigerators, cash registers in Dayton- now, the world turns to places like Spartanburg SC and Marysville Ohio. There is a reason for that, and it is us.

It’s time to have a serious discussion of these issues. To analyze how we’ve become a place that has to pay people to come invest. A place where we have all the pieces to build a great economy, but lack the instructions on how to put them together effectively.

That’s my end game. Are you in?

…just guessing here, but suspect it might be the good folks of Greene County who issue a lusty “no way Jose” to your unrealistic proposal. The folks from Fairborn to New Jasper who daily view the dysfunction to their west. Many of those folks experienced the Dayton experience and found it lacking. So they, at great personal expense and inconvenience, moved to where the schools and streets are safe, And properties appreciate. And homicide isn’t handled as a misdemeanor. But if you want to convince our rural neighbors to the east the Old Bandito knows the perfect venue. Hold a meeting for Greene County residents at Wiley’s Comedy Club. The laughter will be of the rolling on the floor variety…

Everyone I know in Beavercreek, and I know a few, used to live in Centerville and moved out SPECIFICALLY to get away from outrageously unfair Montgomery County property taxes and wasteful, asinine county government. There is no way IN HELL those folks would ever vote to join forces with Montgomery County.

You envision “a government that believes in good schools, safe streets, excellent services, equal opportunities and fair and equitable taxation and incentives.”

Beavercreek and other local suburbs believe in all of that too. They have it, in fact, and would like to keep it that way.

And right off the bat, the small minded people speak- thinking there is a difference between Greene County and Montgomery County. They both suck- in different ways. The reality is- good government is efficient government- and rarely seen. The consolidation of services- with the bigger region, should make things work- the way they are supposed to.
Why people think that the boundaries of incorporation are anything other than arbitrary lines on a map drawn long ago- is insane.
Land nav 101- “The map is not the territory”
It’s time to adjust the governance to the growth.

All you need to do is watch this man’s video of how he speaks to a library security guard. He’s the consummate victim. What he does on that video, is what his endgame is, period. No plan, no solution, just to be a victim and try to bring wasteful litigation into the system. Not to mention just to write to his little group of fans on facebook that lift up his fragile ego. He doesn’t like Trump, nor do I, but I’d argue he’s got more in common with the man than not.

They need to put a proposal on the ballot that, if passed, would prevent Greene County residents from working in Montgomery County. They love to bring their”Holier than thou” faces to Montgomery County at least 5 days a week to take our wealth back to Greene County, all the while looking down their noses at those of us they perceive to be less worthy than they.

While certain forms of regionalism are good…others aren’t. This isn’t small minded, it is reality. Time and time again the failing inner core wants the functioning outliers to be their support system. Take Green county out of the mix. You have a jail here, in Montgomery County, that many say is failing. This is a regional facility, paid for by the entire county, managed by a county official elected by the entire county, and managed by commissioners elected by the entire county. Why on God’s green earth do you think that one jail that is a merged multi-county facility isn’t going to be managed in the same manner? Are the Greene county citizens that smart that their electoral voice will put competent people in charge? They have just as many issues over there. Cities that have metro services aren’t all they are cut out to be. Indy and Louisville have their issues as well. The interests of a citizen in Oakwood (ie. hey police, can you fix my trash cans) aren’t the same as Dayton West (we don’t want cops). The local ordinances, that cities have put on the books for necessary regulation, outweigh the weak county regulation and weak state laws. You expect regional law enforcement to sort out ordinances for each and every municipality, essentially ruining the enforcement of home rule legislation. Right now, the closest thing you have in public safety is regional fire department response. Do you want Jefferson Township trained and equipped medics rolling up to you? Or Huber Heights medics with state of the art equipment and training? As someone who loves what Dayton actually has to offer and appreciates new opportunities, the walls around the city that force opinions like mine are based in reality of where the line of effective government and services meets ineffective government and services. I am not willing to sacrifice what I pay for in terms of schools and city services just so those who have squandered away services for 4 decades can start to see a rise in what they have. I am not willing to have… Read more »

Truth- maybe the problem is we just have too many elected officials per capita- and it’s that simple.

My concern is holding my elected officials accountable to see that my services are operating efficiently and with some fiduciary responsibility. Until you guys get your house in order, don’t try and balance your needs off of those who can balance a checkbook and take care of their citizens.