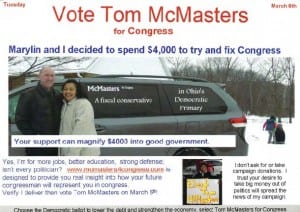 This bio comes from the DDN voters guide- which I reposted here http://esrati.com/?p=8281

Answer 1: The preferred method of reducing the costs of military action is to not engage in one unnecessarily. You can tell from my summer of 2003 web post “Thank God for Senator Robert Byrd” I knew even then the invasion of Iraq was a bad decision. I’ll take that same superior judgment to Congress.

One of the many avenues for reducing the cost of government is to change the mindset of commanders and department heads that lead them to spend to budget. Budgets must take inflation into account. Expenditures should reflect value. Change the mindset and save 10% this year.

Answer 2: The single most important issue in this race is to maximize the number of informed voters. To regain our stride toward national prosperity we must put our financial house in order. This is a complicated equation of the right taxes, smart regulations and a national commitment that demands we invest brain power to implement the best solution. Four months before Petraeus became commander in Iraq, I outlined the premise of our involvement with the “Iraqi Awakening”. In 2009 I proposed the President’s latest housing solution. To ensure our highest standard of living, voters should be knowledgeable when choosing a candidate.

These are the videos from various candidates nights. McMasters has also filmed himself at most of the events. He has helped me out sharing his video when my camera has had issues.

He is not taking any donations, instead investing up to $4,000 of his own money on his campaign.

He has a piece of campaign literature, as displayed above right.He has put vinyl letters on his mini-van. He ran as a Republican against John Boehner in 2010, but has run other times as a Dem. He calls himself a fiscal conservative. He will make excuses for his website- which until he discovered Esrati.com, wasn’t using a content management system. He’s rebuilding his site- but almost always talks about positions he wrote long ago that would have solved all major of our major crisis.

He has reflective bumper stickers too, and expects volunteers to work for him at random without giving them the tools of a modern campaign. He sometimes has awkward pauses in his speeches and tends to sound like a technocrat in describing his solutions. The audience didn’t laugh at his joke and after the third time of trying the same one about the extroverted physicist he put it away.

He has 5 very well behaved kids, lives in Huber Heights.

Paid for by Tom McMasters (with permission from his wife)

McMasters is in a 6 way race to run against Congressman Mike Turner in the newly redrawn OH-10 district that includes all of Montgomery and Greene Counties and the northern part of Fayette County.

His opponents are David Esrati (author of this site and producer of all the videos), Olivia Freeman, Sharen Neuhardt, Ryan Steele and Mack Van Allen.

From the Dayton Daily News profile of the Democratic candidates in this race, “U.S. House primary featuring 6 Democrats“:

Asked about abortion and gay marriage positions, McMasters said, “If you’re hard on one side, you’re probably not going to vote for me.” He leaned toward “civil unions” for gay couples, and said from a religious standpoint, abortion makes him “nauseous” but he wouldn’t support legislation against it.

Candidates who think that marriage equality is wrong make me nauseous but sometimes I hold my nose and vote for them (yes, I voted for Obama even though publicly he’s “evolving” on this issue), but if I have a choice, I’ll vote for someone like Esrati who actually comes right out and says that marriage equality is right when it comes to the civil laws of our country.

It’ll be nice when all Democratic candidates actually believe in marriage equality (or at least realize that this is the public position they’ll have to take).  It won’t be long.  The public has been trending towards supporting marriage equality, and we’ve seen some brave governors in NY and Washington State (and hopefully in Maryland soon) who understand that equal protection under the law applies to queers too and that separate still is not equal

For an example of which way the wind is blowing in the Democratic Party when it comes to marriage equality, see this recent article, “22 U.S. senators call for marriage equality plank in Dem platform:”

And, of course, since my comment above, the governor of Maryland has indeed signed that state’s marriage equality law.  See “Md. governor signs bill legalizing gay marriage:”

“Religious freedom was the very reason for our state’s founding and at the heart of religious freedom is the freedom of individual conscience,” Gov. Martin O’Malley said before signing the legislation that made Maryland the eighth state in the U.S. to legalize gay marriage. The law takes effect in 2013.

The DDN reporter and I had a 40 minute conversation which he summed up in these few lines. During that conversation I stated that same sex couples should be able to be affectionate in public, get spousal visitation rights at hospitals, and intertwine their finances the same as opposite sex couples.
I personally would call this marriage but in deference to my parent’s generation that concedes the above societal privileges should be conveyed upon same sex couples but have a hard time with calling this marriage, I believe it is foolish of the gay community to alienate these potential supporters over semantics.  Therefore I lean toward civil unions.