The most insightful came from a friend who used to work in the “economic development” field in the region- who left about 5 years ago. He’s now working in the Research Triangle (and not for LexisNexis) and says they don’t have the unbelievable asset of Wright Patt- but have totally eclipsed Dayton in leveraging their intellectual capital. And then- he said why (and I’m paraphrasing and tightening it up){

“Dayton has too many people who say they want growth, but don’t want to give up any power. They then become more interested in enriching themselves, and instead of growing the region, have actually caused negative growth.” 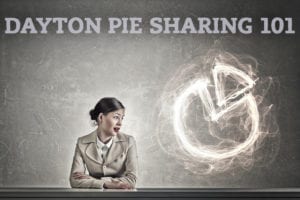 Another explained it this way. Daytonians think of the wealth as a pie- and they are all trying to get a bigger slice- denying others so they can have more. Other communities try to figure out how to either grow the pie- or bake more.

Someone else who was on more committees and boards of directors than humanly possible said “Interesting piece that was long overdue. There was a period when I was in too many committees.”

Back in John Patterson’s day- the ruling local class were in government- no one had struck it big yet in Dayton. Patterson decided to try to take the power away from the elected officials and instead put it in the hands of professional management- and thus the city manager form of government was formed.

But- Patterson never envisioned 30 jurisdictions in the pie tin that is Montgomery County- in his day- there was one. Also- his version allowed the business elite to guide the professional manager in the backrooms- through what became known as “the All-American Committee” who actually used to pick the candidates. This was when Dayton was still a powerhouse city- with NCR, Mead, Standard Register, General Motors, Delco and all the spin-off support firms. Now everyone of them is gone- and *News Flash* LexisNexis won’t be much of anything in a few more years. They’ve transitioned all their hosting too the cloud- and even the servers that were here are being decommissioned. All that will remain is tele-sales and support. The creative brains will be in the Triangle.

So now, we’re left with the 28 or so banana republics each with their own little dictators. Each responsible for tiny islands, with lots of duplicative services. There are no more big “sugar daddies” to support them, so taxes keep rising, services keep declining and the region falls further behind competitively. But, it’s not just Dayton- I just read that Ohio is number 6 at losing population to other states. We’ve got a stupid system of subdivisions that’s destroying our competitiveness. We’re also very accepting of mediocrity in leadership.

The post last night- about the quasi-governmental non-profits that are filled with well-meaning folks who think that if we just drink enough of their flavor of kool-aide, we’ll somehow resurrect our grandeur of times past. Some think back to the Wright Brothers and want to erect a giant plane on a stick at the intersection of I70 and I75 just in time for self-driving vehicles to make paying attention to anything other than our phones when traveling. Others think that distribution is our secret sauce- with the 90 minute market idea- not realizing that Amazon already has distribution figured out. Another group thinks that everything good flows out of the base, another out of our educational institutions, another our cultural, and another our parks and bikeways… and “River Run” and the giant pisher, excuse me, fountain.

The reality is that each of these cake decorating organizations has decided that by paying their directors more than our elected leaders, we’re somehow going to “grow the region” or “Get Midwest” or some other ethereal nebulous definition of success.

When you realize that the head of the Downtown Dayton Partnership with her staff of a dozen- is making more than the City Manager of Kettering, the City Manager of Dayton, the County Administrator- who all have responsibilities exponentially greater, Dayton, we have a problem.

Or when you look at the “Superintendents” of Jefferson Township, Dayton and Trotwood- all failing School Districts- and realize that their sole goal in life is to retire and rehire (like Libbie Lolli) and then go to work for the basically unregulated Montgomery County Educational Service Center like Frank DiPalma and Rusty Clifford and Tom Lasley- and suck at the trough of oodles of tax dollars- when in fact we could have one countywide school district, with one really competent Superintendent, Treasurer, HR Person, Special Ed Specialist, ESL leader etc- and pay them less than any two of these other fools put together and have a lot of extra money to actually spend on teachers and education.

Or the Sheriff- and all the police chiefs of all these different banana republics. It’s as if hiring your own Andy Taylor for Mayberry R.F.D. is a point of pride in Ohio. The police commissioner of NYC has a force of 35,000 under him- and a much higher cost of living- and yet, we could take any three of these “chiefs” and combine their salaries and offer equivalent pay.

Let’s get to the winners and losers. The “winners” are the heads of all these quasi-public non-profit dodges of actual legitimate oversight by elected leadership and accountability for their actions. They make serious money- and contribute next to nothing- except to political campaigns and their own self-service.

Their second best friends are the AF Mafia- retired Bird Colonels and up. We find these retirees jobs left and right. You can run a non-profit (into the ground) or a public utility, or lead a task force, or be a university trustee. As long as you help bring defense contractors and contracts to the region, we’ll dote all over you.

And lastly, the political class. We take care of our politicians and make sure they always have a job. It’s how folks become lobbyists, and do the politicians jobs, or end up as employees of a non-profit real estate group buying up buildings for a university going bankrupt, or how money keeps flowing into a certain congressman’s coffers.

The losers are the rest of us.

Coming next- we’re going to start publishing ridiculous pay histories of some of the biggest frauds around.

It’s time to grow the pie and make more. It’s time to cut the crap and get our moneys worth.