This story has a happy ending. But, it’s not because we’ve got our priorities right in Dayton. That’s up to Dayton voters tomorrow, who get to decide on if they want a City Commission that works for them, or one that works for the big money that backs the same old dog and pony show we’ve suffered for years. (Hint, vote for Leitzell, Greer and Esrati, the three Independent candidates).

Last week, I read on Facebook that my friends James and Cammie Harris, who just recently opened Serendipity Bistro on St. Clair Street, had been robbed. Not much was taken, an iPad with a cracked screen and sponge bob stickers on the back, and money from the tip jar. Why this hurt even more, was that they used the iPad as their point-of-sale, with a square reader. It’s as if someone stole their cash register and their credit card machine.

A regular customer heard about this, and was nice enough to give them an iPad mini. That’s why I love Dayton. That doesn’t happen in New York City or Chicago, Dayton has incredible people. I made a mental note to myself to eat their a little more – to help them out. Tonight, I was there when Cammie got the ping on her iPhone that her “Find my iPhone app” had located her stolen iPad!

She wasn’t sure where it was pointing to, and I looked and said- that’s Sam’s Market, at the base of the E. Third Street hill at Sperling. She called the non-emergency number and got the brush off. They’d send someone. I told them, if I wasn’t exhausted and starving, I’d run out there right now and try to get it (my order was in, but the food wasn’t up yet). James went instead. 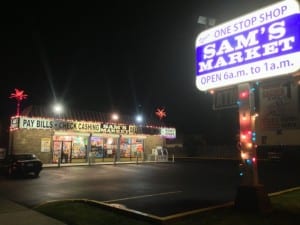 Before we’d finished our candied walnut, chicken and mandarin orange salad and margharita pizza, James was back. iPad in hand. He’d walked into Sam’s, asked if they had WiFi and got a stupid look from the guy behind the counter. James asked again- Internet? The guy saw James was serious- and nodded yes, then James said, “my iPad was stolen, and it just popped up here, it’s got a cracked screen and sponge bob stickers on the back.” The guy played stupid, James asked again, said he wasn’t leaving until he got it- and the guy then pulls it out from under the counter, and say’s he paid someone $50 for it, and what about his money?
James said, that’s between him and the person he bought it from, either hand it over, or he’ll wait until the police come. Across the counter comes the iPad. When you turn it on, the lock screen says “Stolen from Serendipity Bistro”- there was zero confusion here.

I promised a happy ending, and there it is, James and Cammie have their iPad back. But, here’s the question, what good is the tracking technology if the Dayton Police Department can’t be bothered with going out and following up on these calls right away, before the crooks realize that the unit is being tracked, or can’t be cracked unless you really know what you are doing? They said they’d send someone out, but without any urgency. Had this been Oakwood, I’m sure they would have been on it pronto asap. 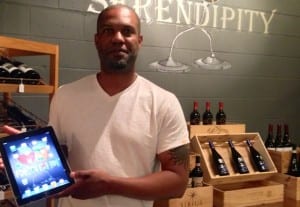 James Harris, of Serendipity Bistro, with his recovered iPad

45 minutes after the initial call, and at least 25 minutes after James had recovered it, the cops called, instead of showing up. No way of busting the business for dealing in stolen goods, no catching anyone red-handed. This is why I don’t have my chainsaw back, my bicycle back or any of my other stuff (although they did get the stuff from my office break-in back, thanks to a cop disregarding an order to stop pursing the thieves).

Here was an easy chance, using technology, to solve a crime on the spot and send a message to the thieves of Dayton that we don’t mess around. Instead, it’s up to the citizens to take matters into their own hands. There is talk about turning the theft of cell phones and laptops into a felony, and if you ask me it’s not soon enough. NYC has been going all out to cut this kind of crime, read this amazing story from a few days ago in the New York Times about how when you have enough cops on the street, you handle things like this: Theft of an iPhone Sets Off a Cinematic High-Speed Chase

That’s the kind of police department you deserve Dayton. In the meantime, maybe we should give James Harris a badge.

Much as I understand the sentiment behind it, this is mountain/molehill stuff, Dave, at least in my opinion.  An iPad was stolen; that’s a bummer.  I admire James for tracking it down and retrieving it.  Unharmed.  I trust he made a full police report.  However, I think you ask too much for the cops to respond with any great alacrity to what amounts to petty theft (and I doubt Oakwood cops would have responded any quicker unless the complaint came from a mover-and-shaker in that community).  The NYT story is amusing, but I can only wonder how things would have turned out there if the pursuing cop had caused a traffic accident that killed or injured someone.

@Geoff- maybe I didn’t make it clear enough, but, my chainsaw, bicycle and lawnmower don’t have built in lo-jack trackers. The iPad did. It may only tell you where it is for a limited time, while charged, turned on and connected to the internet- after that- gone. This is a gimme win for the Dayton Police Department- a chance to close a case quickly and effectively, and possibly have an excuse to spook the hell out of a person who has been involved in fencing stolen goods. This is the way to put a dent in crime, effectively, and they took it lackadaisically. That’s not how you earn the confidence of the people who pay your bills.

When it’s your stuff that’s stolen you feel violated. When you get it back, it’s a psychological victory and makes you feel good about your city. This is a mountain. And remember, they got Al Capone for tax evasion- not the other stuff.

Regarding the police department – just came from my polling place, and noticed Chief Biehl’s name on a roster with Huber Heights as his city of residence (it is a combined precinct).  Maybe there would be more concern for Daytonians’ property crimes with a Dayton resident at the top?

Well spake, Dave, and I’ll back off my prior position somewhat to acknowledge that being ripped off is no fun.  Many moons ago when I lived in Dayton proper, someone broke into my apartment while I was at work.  They took nothing of value, likely having been spooked by other residents, but the incident was, indeed, something that felt like a violation.  I also had my truck broken into and minor items stolen, and that, too, felt like a violation.  In both cases, my reports to the police were taken in stride, shall we say, and ultimately nothing came of them.  Property crime is, as you know, generally not a high priority, if only because it is so difficult to solve.
In my mind, so be it.  I’m not absolving the police of responsibility to pursue criminal actions; what I’m saying is there a lot of other fish for them to fry, and I understand that.  I’d rather see our police dealing with more serious matters.

Hey Dave, I’m glad you posted this as this was another one of my many disappointments from investigating the city of Dayton.  A neighbor of mine in Five Oaks got burglarized where a laptop was stolen.  Later that day, I happened to be in one of the convenience stores along N Main St getting gas where they had used cell phones, Xboxes, and laptops for sale.  As I paid, I looked in the cases and actually wondered if my neighbors laptop was inside.   I have neighbors in Five Oaks that frequently say to me they don’t go into the stores on N Main due to them being slummy, my argument is the whole place is slummy and if you remain ignorant about what these places are doing or not doing, how do you make an informed decision about a liquor license or how would you know if they started selling or women or children one day?  There are several stores that sell used merchandise along N Main St.    I checked with the tax division, no one checks on businesses to see if they are legitimate or supposed to be there paying local taxes.  I checked with building services/zoning department, each business open for public in Dayton is supposed to have a certificate of occupancy at the very least.  The only answer that I was provided with is that there is 1 person working in that “department” and no one goes out and checks.  The departments do not even work together or maybe only in instances when it benefits the downtown neighborhood.   When I checked with the secretary of state, they said they want businesses to registered but there is no enforcement almost making it seems voluntary. So you and I would have to pay taxes and register our businesses because we do the right thing but others do not and no one even checks. The city is a dope addicts dream.  If I am an addict looking to feed my crack or heroin addiction, I can go steal from someone on Grafton, fence it at a store on… Read more »

“Had this been Oakwood, I’m sure they would have been on it pronto asap”

…because they have little else to do. It doesn’t make Oakwood PD better or more responsive.

…because they have little else to do. It doesn’t make Oakwood PD better or more responsive.

And that’s a mark of a healthy community- where the police have little else to do. We’d like a little of that here please.

I enjoyed this article because my car was broken into three times!  I called Harrison Township Sheriff office and was told I needed to come in person and since they were closed I had to wait outside in my car until an on duty officer had time to show up. One hour of waiting and one showed up to ask me if anyone was hurt and when I said no he said ok well nothing we can do and I have warrants to go serve so good luck. I was appalled and asked what he was there for to which I was told to get a police report for insurance to get a new window. How sad!

The Dayton Daily news has a story about recovering your own devices today- with the Chief saying don’t do it. However, when you call the police- they won’t respond despite the short window that may be open with the tracking working.

Dayton Police Chief Richard Biehl said the department’s next step is to start handing out cards to repeat theft offenders warning them they can be tracked. “We really want to go with it as a deterrent,” he said.

Gasper said for now their technology is only for use by law enforcement.

“We have major concerns when citizens start trying to track their phones themselves,” he said. “Concerns of vigilantism.”

“Do not attempt to recover the phone yourself,” she said. Many of the apps on the market include disclaimers that users should gather information using the technology, then turn that information over to police.