UPDATE MAR 2011-apparently it cost more to go bankrupt than to keep the doors open- and Motoscooto is back in business.

The vultures descended on Motoscooto yesterday. After a 2-year run, the small, independent scooter store auctioned off the remaining inventory online- and will be no more.

The small former gas station on Wayne has had its share of tenants over the years. When I first moved to South Park, it was AAA Glass, a family business. They moved to a larger building on Nathan Place- right across from the DMHA Cliburn Manor- only to be broken into, vandalized, and tagged on a regular basis thanks to the projects. They now are over on E. 2nd Street across from the 2nd Street Public market- and their old building is gone, taken down by Miami Valley Hospital- which refuses to disclose its plans for the large parcel they’ve assembled along with CityWide (an area that could have taken the new Kroger- but wasn’t in the running due to the secret master plan by the people who pull the strings in Dayton).

After AAA moved out of 1400 Wayne, it was Michael B’s detailing service for a few years- until they got chased out for the Wayne Avenue Kroger deals and the “blighted” neighborhood designation. The back building has been leased to “Noah’s Ark” car repair- where Spanish is the main language- and fixing cars is the business.

The little gas station sat vacant between tenants. But, it was always a nondescript beige, before Motoscooto took over- and pumped some life into it- with its black and green paint scheme. The building wasn’t quite big enough to do sales and service. So he had the sales in the station- but the repairs were down the street next to 35- an inconvenient solution. The belief was that with the high car count on Wayne Avenue and the low rent (thanks to the blight designation- plus there were still options on the building when they moved in- and might have had to move out if the Kroger deal had gone through) the hope was the visibility and ease of access would make up for the issues of managing two spots. 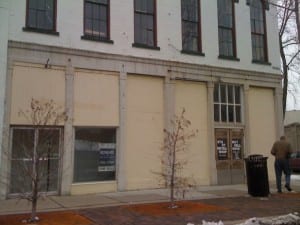 Even in applying to go into what has been a historically automotive location on Wayne Ave., in a “blighted” neighborhood, where the city still held an option to purchase and tear down the building- the city wanted $2k for a permit. Intervention by an architect got the fee down to $200. It shouldn’t be this hard.

The quest to find a space in the city- took a year- unfortunately, it was the year of record scooter sales- when gas was approaching $4 a gallon. Had things moved faster, he might have had a better shot at establishing a base clientele.

Sure, Jason wasn’t perfect. His no BS straight talk and low tolerance for tire kickers- didn’t always make for the best customer experience. But, considering the hurdles you have to jump to get into the automotive retailing business- you’ve got to give him a little credit. The state requires you to “register” every product line that you carry- can you imagine if that rule was applied to other small businesses- or even large ones? And Ohio, unlike other states, doesn’t distinguish between 50cc scooters and Harleys- all need a motorcycle license. Many states allow a standard driver’s license to suffice for the 50 cc scooters- which top out around 40 m.p.h.- and are capable of getting 110 m.p.g. or more. So much for “Green Ohio.”

And, yes- he could have sold more accessories and the like, but, given the confines of his retail space, it was a lot of work just moving scooters in and out to display them out front on a sunny day. He also had issues with shoplifting- and a few days before the end, some low-lives stole his 3-rail trailer. Had he been on Fifth- upstairs could have been the accessories space- making for easy inventory control- while the scoots and service were downstairs- c’est la vie.

I think the most telling thing about the life and death of Motoscooto- was that one of Dayton’s “development” jedi masters- who easily makes close to or over $100K a year- was in the store buying the Genuine Scooter that he had hemmed and hawed over for the whole summer. Instead of supporting a local going business and paying a little over cost (which was the deal he was offered as the wheels were coming off the business in September) – he waited for the going-out-of-business auction and stole the scooter for $500 under cost. That sure is representative of how we do economic development in this city when it comes to the little guys.

As a full disclaimer- I, too, bought one of the remaining scooters. But- also note, I’ve done the branding work for this venture from day one- and done it at a considerable discount, because I wanted to see all of you enjoying scooters in Dayton- the way I do. Those of you who know me, know I’m on my vintage Yamaha Riva all over town in the summer- and sometimes even in the winter. I’ve written off some work that we did, and will miss the activity in the black-and-lime building, but what I’ll miss most- is the little bit of the American dream that slipped away this Christmas eve.

If there is anyone brave enough to jump back in the scooter business- the brand, the lease, and a whole bunch of insight on the business can be bought from Jason. With gas prices headed up again, and the economy seeming to rebound, maybe this is your future business. Drop me a note if you are interested.

Sucky, sucky news… I’ve been looking at a condo in Carillon Tower, and, if I were to get it, a scooter commute to my downtown job would have been my preference.  I applaud Jason for giving it his best effort, even in the face of governmental inertia.

WHY IS IT SO HARD TO DO BUSINESS IN DAYTON, OHIO? THIS IS GETTING STUPID… REALLY STUPID.

It’s probably more indicative of the weak local market for speciality or niche things, like motor scooters.  But always entertainng to read about how local officialdom shoots down things or makes things tougher than they shoul be.

Maybe he should have opened in Yellow Spings, he’d be a regional destination for people wanting to buy scooters since YS gets a lot of regional retail traffic for people looking for cool specialty items?

That being said, I thought the Wayne location was pretty good.  It was a high-viz location on a major artery out of downtown.  When I saw it and the graphic identiy I was wondering if you, Esrati, where involved as it looked like your work or style.

I heard from a friend looking to buy a new scooter that the staff or owner there (whomever was selling the scooter, I don’t know who) was kind of a prick. I haven’t had any personal experience with them, but I heard the prices were completely uncompetitive and the salesperson was rude and blew my friend off. I know for a fact you can get better service from a scooter shop north of Dayton. Mom and Pop sometimes kill Mom and Pop shops. Poor service and a bad attitude is POISON for a business. Word of mouth can be your best or worst enemy. Blaming every failed business on the City of Dayton doesn’t add up for me. ALthough it is true, the city should be falling over themselves to accommodate at least a little support for these businesses.

That said, I hoped that the business would survive and make a good run of it. That strip between 35 and Wyoming could be great. I really really hope the coffee shop gets going.

The logos and branding look good though, David. Bold and striking!

Motoscooto is back from the dead- and selling scooters. He’s saying he’s sold out now- but has more scooters coming next week. He’s specializing in closeout and deal scooters- but with gas prices heading back up- I’m pretty sure the prices will be going up as the inventories dry up.

As a moped rider (not a scooter) I thank you for featuring this business and it’s sure unfortunate that it’s no longer available.

Thanks David for sharing great news and info about the Dayton area.

Motoscooto is gone- but Boogie’s Green Machines is open on Brown Street across from Burger King. They sell and service scooters, electric bikes and mopeds.

I visit them (Boogie’s) from time to time.  Thanks