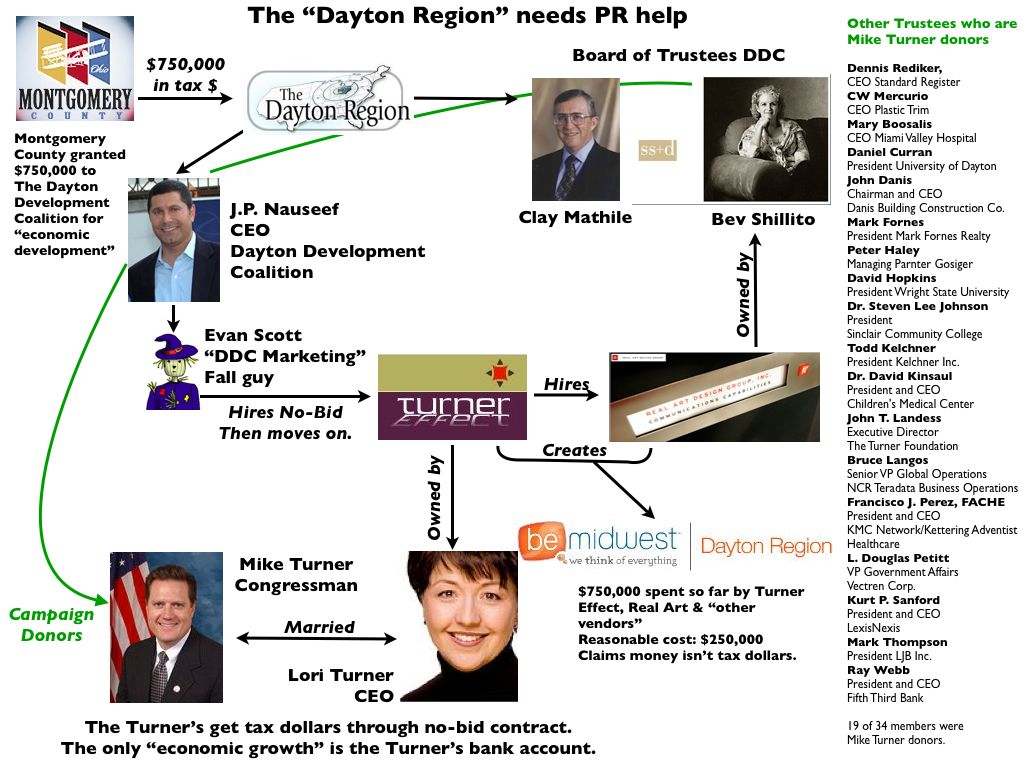 Jeffrey at Daytonology suggested a flow chart of the “Get Midwest” campaign created by the Dayton Development Coalition for the “Dayton Region.” It was a good suggestion, because when looking at the relationships, I also did some digging. I probably should have made it even more interactive, with links on each Trustee that had given to Mike Turner to their FEC donation report.

19 of the current 34 Trustees had given to Mike Turner’s campaign. Bev Shillito, who used to be on the Board of Trustees also gave, and is the co-owner of Real Art, the firm Turner Effect hired to do a lot of the work.

Finding the Montgomery County resolution granting $250,000 a year for 2006, 07, 08 for “economic development” would have been almost impossible without some help. Thanks to those who guided me in the right direction. The resolutions are PDF’s containing scans (see Mar 14)- unreadable by the web, or blind people. This should be changed immediately to comply with ADA requirements, and to make the searches work.

The contract was granted to “Development Projects Inc.” to “differentiate” the dollars from a gift to the “Dayton Development Coalition”- which is just one more smoking gun in this massacre of ethics in the area.

It’s funny how the County gives $750,000 to a private organization, stocked with Turner donors, who then hire Turners wifes firm on a no-bid contract, who then hires another board members company- to do a campaign that is universally panned- at a cost so far, of exactly $750,000. As a professional in the same field as Mrs. Turner, I can say with authority that $750,000 is 3x what it should have been.

Lynn-
Last I heard Evan Scott was working for Shumsky. He had a stop between the DDC and Shumsky, can you verify that wasn’t qbase?
And from what we can tell- Q-base requires it’s employees to donate to Steve Austria more than anyone else: http://daytonos.com/?p=808

Good work with the pix, now I know what some of these players look like.

I don’t get it!? Why does Turner Group need to hire Real Art?

AnoN,
This is just a shot in the dark, but could it be a kickback to Real Art for giving Turner Effect a big, fat, no-bid contract in the first place???

And here’s an inside joke to Juan: I like MY diagram of this situation more and more all the time. ;-)

Turner Effect hires Real Art because Real Art actually has talent. Original Real Art owner, Theo Stephan was a Belmont classmate of Mike Turner. There has been a symbiotic relationship for years. As far as I can tell, Turner has almost no creative types on staff- but many “account executives” and the shop mainly acts as a pass through. They do try to bill for “marketing research”- of which I’ve seen an actual report. It was about 6 years ago- and it wasn’t worth the paper it was printed on, yet they had charged the client $12K

David, if I were you I would start budgeting for a food taster and wire your car with a remote starter. This expose is real deal, no flinch stuff!

Seriously though this local slice of incestuous commerce that you have unearthed also really underscores how entrenchment, lack of central reporting authority and accountability is “dragging the starter” to the point of killing the spark.

I don’t really want to believe these relationships are anything nefarious. It’s just what happens to systems that don’t conduct regular oversight, maintain regulation of their operating mandates, survey their internal functionality, their public value to shareholders and stakeholders, or their functionality to the external environment,…or as you put it,…”maintain transparency”. Is the crime any less insidious by its intent?

What the local development system desperately needs is a central reporting authority, a choke point. The Dayton Daily News thinks so, Consultants hired to review local development efforts think so. The obvious issue is how to force consolidation when so many entities are resisting the changes critical for the growth of the region, and who is going force that consolidation to happen.

Maybe one of the initiatives from the Creative Class Group will address the issue.

I talked to WSU president David Hopkins about his donation to Mike Turner of $250. It was the fee for playing in a golf outing. He said it was a lesson learned, but he attended mainly because he wanted access to other people who were playing.
The rich and powerful still do deals on golf courses- and even a university president is expected to pay to play.
This is why I’m running. If you want to have access to me, you just send an e-mail or comment on this site. I doubt many would want to have access to me while playing ice hockey- my sport of choice.

Personally I’ve found the sport of golf to be a horrible waste of time, and golf courses (especially private courses) to be a horrible waste of natural resources that should be open to the public, not to mention the amount of chemicals that are applied to keep them artificially green and free of weeds. Maybe that explains why the more time most guys spend on a golf course, the more they act like flaming $#@holes. It’s all those herbicides. Seriously, I think if you press most people hard enough as to if they actually enjoy playing the game, the majority of them will admit they don’t. They do it simply because they think they have to. How sad.

I agree with Jim; however, they interconnectedness of Community, Moraine, Dayton and NCR Country Clubs will make great intersuburb farm land some day. If Google Earth ever gets good coverage of West Kettering, we will overlay the crop recommendations on the land.

the interconnectedness instead of they OY

Jim – most people who hate golf can not play golf. They try and they suck and give up. I enjoy golf, and I am not that good. It is also a good promotion of health (walking) and sportsmanship. It is a gentleman’s game after all. Maybe some Dayton punks would benefit from learning how to behave in public, but that will never happen.

Why should a private course be open to the public? What is the definition of private then?

The chemicals they use are much more friendly to the earth than the basic home owner stuff found at mega stores. Maybe we should ban homes. And golf courses are a favorite spot of deer and squirrel. They don’t get run over on courses, only on the streets you drive on.