While Congress continues to feast on the foibles of the VA, pointing fingers at anything that moves, one little minor problem continues to be overlooked: Federal contracting and its farcical system of awarding contracts and providing the lowest and best cost solutions to the taxpayers. The Feds are the largest purchaser of goods and services in this country.

As a Service Disabled Veteran, who owns his own business, and jumped through all the hoops to become a “Certified Service Disabled Veteran Owned Business” I still have not managed to crack the code of getting work from the Federal Government- including the VA, which is committed to spending at least 7% of their purchasing power with SDVOB’s.

While Congress has the VA on full lynch mode- and claims to have Veterans interests at heart, they’ve never gotten upset that the Federal Government has totally failed to follow it’s own law:

The Veterans Entrepreneurship and Small Business Development Act of 1999 (Public Law 106-50 Download Adobe Reader to read this link content) established an annual government-wide goal of not less than 3% of the total value of all prime contract and subcontract awards for participation by small business concerns owned and controlled by service-disabled veterans.

The main reason: the government depends on the General Services Administration (GSA) to approve all potential contractors with an arcane system called a GSA Schedule. Called “a license to hunt” by veterans’ advocates, the process of getting a GSA schedule is convoluted and overly burdensome, especially for small businesses. While the GSA demands the lowest and best price offered to the government, we’ve seen how well that works with minor purchases like the the F-35 going over budget and way past on time.

From paper clips to printing to pharmaceuticals, the system is rigged so that only a small number of vendors are actually able to compete or bid all in the name of “fairness.”

The VA, is also forced to use private contractors solicited via this process- and when they fail, there are no repercussions to the  contractors.

Take my eyeglasses for example. Mine were broken on Friday May 9th 2014. I was seen that night at the VA. I’d recently had an eye exam, and went to the eyeglasses shop on Monday to get a new pair made. They told me they were running 4-5 weeks behind, which struck me as odd- since there are any number of places in Dayton that can supply eyeglasses same or next day. Luckily, I’m friends with Kevin Harrington of Downtown Dayton Optical and he made me a few pairs of fixed glasses to replace my no line bifocals that day. By Wednesday I realized switching glasses every time I got a text was going to be unbearable for 4-5 weeks, I asked him to make me a pair of no line bifocals. He got them to me the next Monday. 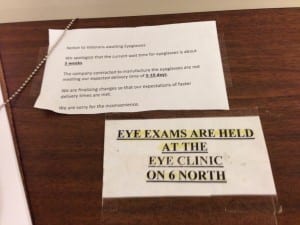 It was still bothering me that a pair of eyeglasses for veterans would take that long and I contacted Director Glenn Costie- explaining that glasses are pretty essential to a veteran and there is no excuse for that long a wait. Turns out I was right.

I was called by one of his assistants who told me the contract stipulated 2 week max. They were in the process of switching contractors, to one promising one week. After a month had gone by and still no glasses, I sent a note to Director Costie asking “Why isn’t your purchasing department penalizing the hell out of this crappy vendor?” saying I would write a blog post about this situation (a blog post I wrote in a post surgery fog also got a lot of attention). The next day, a message was on my home answering machine from a woman who sounded almost incredulous that she was calling- saying my glasses were in.

A sign on the sign-in desk for the optical shop at the VA says:

“Notice to Veterans awaiting Eyeglasses
We apologize that the current wait time for eyeglasses is about 5 weeks.

The Company contracted to manufacture the eyeglasses are not meeting our expected delivery time of 5-10 days.

We are finalizing changes so that our expectations of faster delivery times are met.

We are sorry for the inconvenience.”

I’m pretty sure if I violated a contract with the government, I’d be in prison.

This isn’t the first time a VA contractor has screwed up. Last year, when it was determined that I needed to have my parathyroid gland removed, after months of unnecessary tests including 2 needle biopsies and 2 radioactive scans- despite blood chemistry clearly identifying the issue- I was scheduled for surgery at the Cincinnati VA in July with a specialist. Turns out, he too was a private contractor, and works full time for University of Cincinnati medical center. Contracted for X number of hours with the VA, he sees patients and does surgeries at the Cincy VA only on Thursdays, something like twice a month. When he decided to take a few weeks off in July- they bumped me from my initial consultation, meaning I’d have to go in August- and then wait another month to be operated on. Then, he took a day off- on his VA scheduled day. I wrote both the surgeon and Director Costie again- and here was the summary outcome email back to Costie thanking him after he stepped in on my behalf:

I’m not sure what transpired between you and Cincy.
I’d also sent an email directly to the surgeon through his private practice site.
It said something to the effect of-
“you signed a contract with the VA to operate once a month.
When you take a surgery day off- you don’t just get to bump veterans to the next month- because your private practice comes first.
Veterans didn’t get the choice when they were serving- to say, sorry- I’ll deploy next month, I’m busy.
When you miss a day- you get to do two days the next month. Our veterans deserve your best.”

He came in and apologized to me-
said it was refreshing to see the patient’s perspective. Said he’d been with the VA for 20 years- and this kind of thing still happens- because of a miscommunication- and that maybe I should come work there to help straighten things out. I said I’d pass on the government job- but thanks.

Unfortunately, other veterans don’t have the ability to call bullshit when they see things going wrong, and unfortunately, Congress seems to be so busy pointing fingers that they don’t see the problem either. Accountability means contracts must be enforced at all levels if we truly want to help our veterans- and get our tax dollars’ worth.

I think highly of Director Costie- and I was saddened to hear that he’s going to Phoenix to try to clean up that mess, but the real question is when is the GSA going to be held accountable for securing contracts that are routinely ignored?

Back in 2005, on behalf of my veterans business group, VOB108, now VOBOhio, I wrote a proposal for a GSA EZ schedule to help small businesses have a chance at selling to the federal government. That would be a good start- and possibly allow small businesses a true shot at government contracts- and also, what are the true penalties involved in not performing to contract standards?

Considering new government rules on medicare and medicaid asking for verified outcomes, isn’t it time for the same when hiring contractors for the VA for service delivery to our veterans? And, while we’re at it- how about the same for our Congressmen- when you don’t work and shut down government, you should lose your job and be sent to prison.

You are a democrat David. You vote for big government but aren’t getting your “fair share.” I’m a fiscal conservative. I vote for less government and don’t expect anything but still have to payout the yang for it. We’re both unhappy. I think the answer is accountable government, not bigger government.

Sorry about your glasses.

Foible is usually used in regards to minor flaws and weaknesses. Just a guess, but I don’t think families in Phoenix view the VA failures as minor.

@Joe_Mamma- when you look at the overall scale and size of the VA- they do a lot more right, than they do wrong. Foible may understate it a bit- but, compared to the publicly subsidized “private health care system” in the US- Vets have a much better system.

David, my father and father-in-law were victims of the failed VA system many years ago. This is not news. My father-in-law died two days after I visited him and pulled him from the bed to allow him to relive himself since the worthless nursing staff was inattentive. Likewise my father suffer much anguish and lingered in pain awaiting VA staff.

It’s common knowledge that the VA hires some of the worst doctors in the US and I personally know a nurse who has been fired from three hospitals before landing at the VA.

Your observation that the VA system is better than the subsidized private health care is highly flawed, I assure you.

This does not mean I don’t agree with you on many other subjects.

@Ralph, the failed VA was many years ago. It’s not the same as today. I’ve yet to see an example of a “worthless” person at the VA. Many of the staff are in fact veterans- including my General Practitioner- who is far from being classified as some of the “worst doctors in the US.”
Many docs actually prefer working at the VA- because they don’t have to manage a business, they can just practice medicine- with some pretty comprehensive support.
Unless you’ve actually been treated at the Dayton VA- I’d suggest you hold your judgements and generalizations. Some of the same “ratings agencies” that rate Premier and Kettering- rate the VA- and believe it or not- in some areas, the VA outperforms them handily.
And, btw- the guy who did my parathyroid surgery- if you’d read the post, has a full time gig at UC- and works for the VA one day a week. He’s know regionally as one of the top ENG docs.

They sent Costie to help the Pheonix VA or to show them his way of cutting cost and getting away with it? I am sorry that the Vets in Pheonix are being saddled with Dayton’s problem.

when you look at the overall scale and size of the VA- they do a lot more right, than they do wrong. Foible may understate it a bit- but, compared to the publicly subsidized “private health care system” in the US- Vets have a much better system. – – DE

It was kind of ironic though….I read this sitting in the waiting room at the pediatricians office. My son woke up with a croupy cough in the AM and we were able to get him into the office the same afternoon for an oral steroid treatment. So you choose your healthcare and I’ll choose mine.