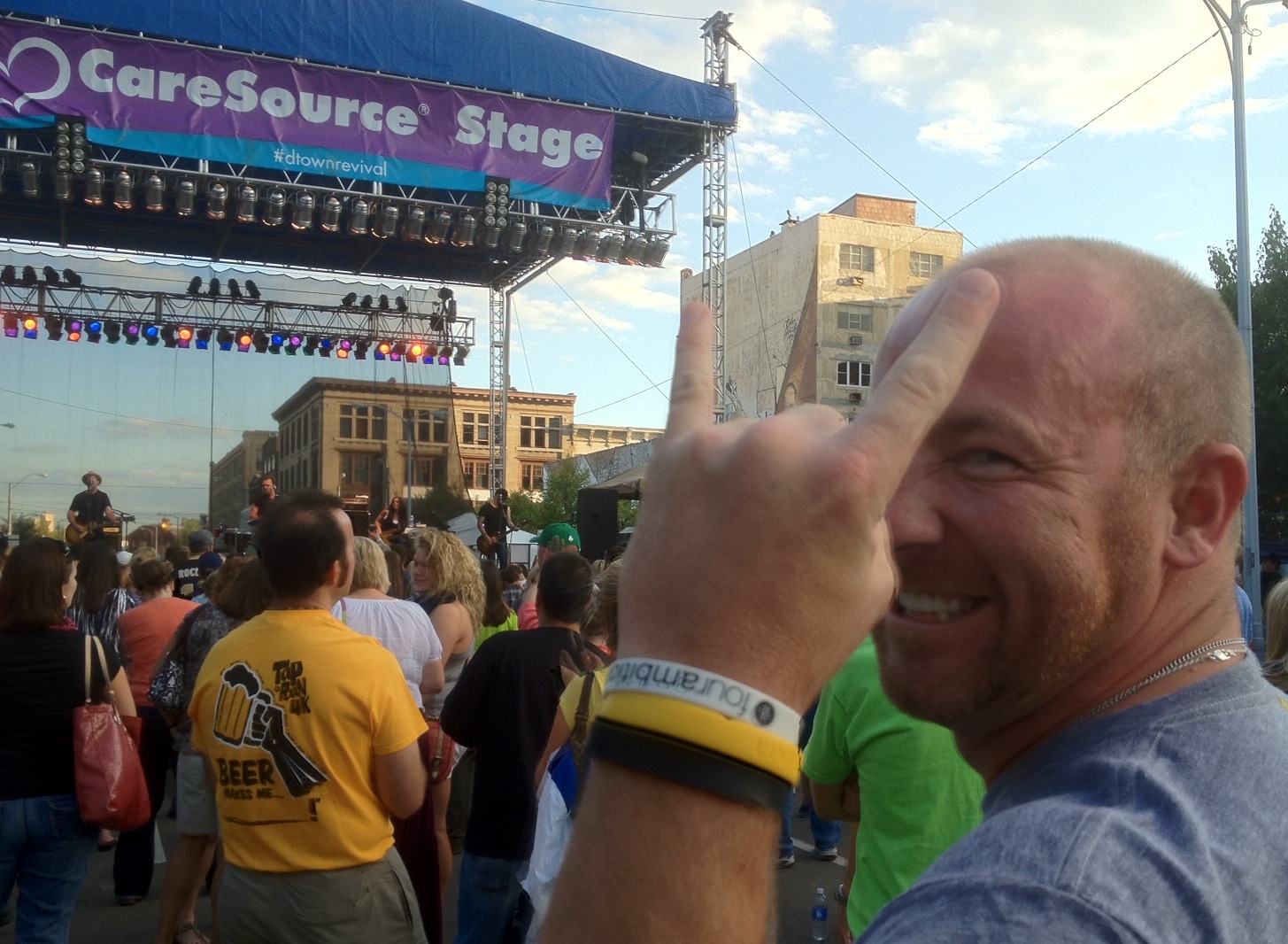 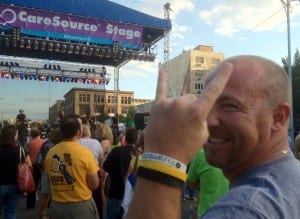 If you stay home today, and don’t come out to see:18 bands on three stages downtown for $44 (new one day pass rate) you:

The Dayton Revival is here.

I spent most of yesterday checking out bands I’d never seen before and having an awesome time. And the band I loved the most- “Ivan Neville’s Dumpstaphunk” – which rocked my world. I think their drummer, Nikki Glaspie, may be one of the best rock and roll drummers I’ve ever seen- like a metronome with a kick like Chuck Norris and the moves of James Brown. I could have listened to them all day- and before this festival- I’d never heard of them.

Today you can hear:

I’ve wanted to see the Ohio Players since they were topping the charts when I was in High School- but, I also remember using Shazam to find out I really liked Karl Denson- and I’ve also heard that Heartless Bastards are amazing (but I’ve got my kids football game to see- so I’m missing it).

All of this wonderfullness didn’t come from the Downtown Dayton Partnership who is doing Urban Nights next Friday night – for my 50th birthday, or from the Dayton Development Coalition or Cityfolk (which has spoiled us for years with their festival which runs three days and was free or with a suggested $5 donation). It’s all because one crazy guy, Matt Luongo had the crazy idea that just because Austin has SXSW- Dayton can’t have something like it. He’s done an amazing job- and, unless a lot of you jump on that recently announced one-day $44 pass, he’s probably going to lose money. If you want to see this return- time to whip out the cash. As to the people who say that the $75 2-day pass was too expensive- it works out to about $2 a band- and some of them, like last nights headliner- John Legend, would easily cost you more than $45 just to see him- so quit yer bitchen. The weather is perfect- and the parking is easy and free in multiple garages downtown as well as at any parking meter.

There are also a ton of food vendors waiting to serve you- including some from local restaurants like my faves Taqueria Mixteca and South Park’s number 1 coffee shop Ghostlight Coffee.

Please support Matt and our city- come on down for a good time. Advice: bring sunscreen, a folding chair, water bottles. Wear comfortable shoes, bring a jacket for later because it will get cool, wear a hat, be prepared for a great time.

I agree. $75 was not too much for two days worth of music. But at the time ticket sales went up, I know I could only attend maybe one day, and they weren’t offering one day passes… so I made other plans for the weekend. They insisted that there would be no day passes… Then Friday morning they started selling one-day passes… That pissed more than a few people I know.

Sounds like it was a great event. Everyone I know that went said it was good. I hope they didn’t lose their shirts. If they did… well, maybe they bit off more than they could chew for their first year…

as an avid lover and supporter of music… your three bullets at the top are nonsense.

While the headliner acts were good, and all of the acts for that matter, the greedy Dayton corporate class ruined this one (as they do with many things) with high prices and playing switcheroo with tickets. I did like that GBV said that their next gig here would be a benefit for the bums whom the City of Dayton sweeps off of the streets if suburbanites are expected.

If you were there Saturday afternoon, the turnout could be described as anemic as best. Great lineup and bands, poor execution in being able to see outside of the bubble of privilege, and holding it on a weekend competing with several other large festivals. Had ticket prices been $20 or $25, that place would have been bursting at the seams.

Notice that the guy won’t release any attendance numbers. Why? Because the attendance was mediocre, at best. If it were the rousing success they claim, he would be bursting at the seams with info.FZD2

GBV has a live bootleg album recorded in Dayton in ’95 called “Benefit For the Winos” :)  http://gbvdb.com/album.asp?albumid=1005

I hope it was a success or at least broke even. Can’t hate on the guy for putting on a huge operation, investing his own money and time, getting investors to put money into Dayton, etc…. of course ticket prices, especially the timing of the one day passes, could have been better. I dont think the one day prices were to bad, except that it was a late announcement. All the more reason to do it agian next year, learn from it and top this years festival next time. I thought I saw alot of people down there, but I really only made it down for GBV.

Hope the Dayton negativity doesn’t start to leach into the conversation. I give the guy and his team alot of credit for putting that on. If anyone can raise the money and do it better, then by all means go for it.