While everyone is all excited about CareSource building a new building on the old Patterson High School site that they bought from the Dayton Board of Education for a cool million, just be aware that it’s probably the last money DPS will see from that property. Because, of course, they sold it to the tax END_OF_DOCUMENT_TOKEN_TO_BE_REPLACED 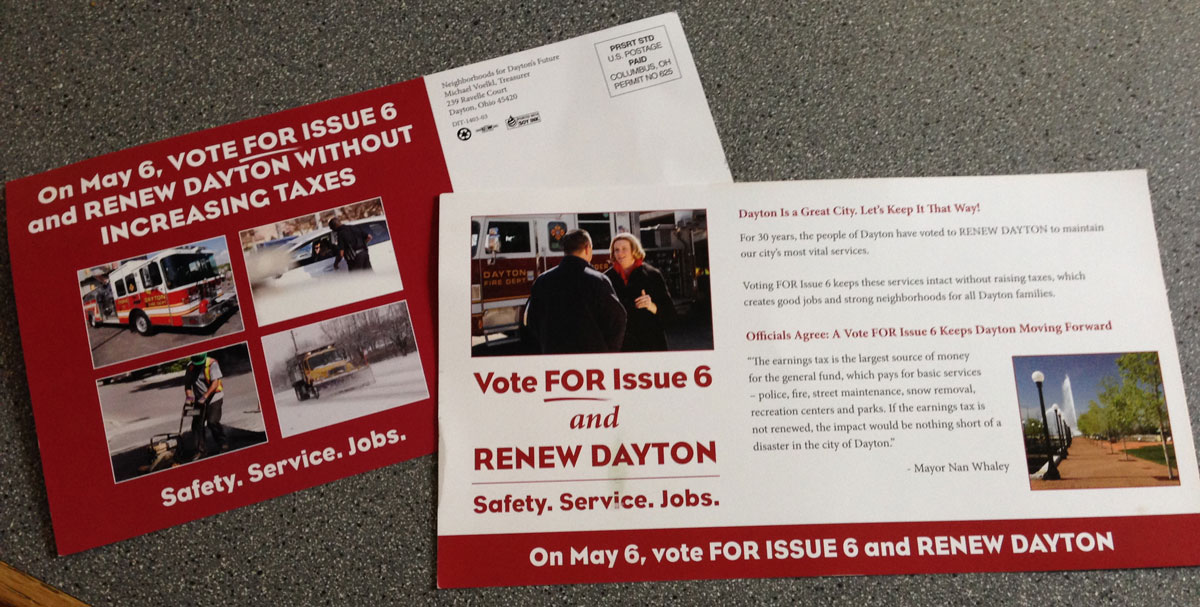 My parents and I received a postcard in the mail today asking us “On May 6, voter FOR ISSUE 6 and RENEW DAYTON.” My father, a senior, who is relatively astute, said that he read it- and has no clue what Issue 6 is. Dayton is a Great City. Let’s Keep It That Way! For END_OF_DOCUMENT_TOKEN_TO_BE_REPLACED

The post election campaign finance reports were due Friday. The Dayton Daily weighed in claiming this the most expensive race ever, if you add in the in-kind donations the Whaley campaign took in: Whaley raised $364,969 and spent $411,656, according to reports filed beginning in January 2013. She spent more than she took in because END_OF_DOCUMENT_TOKEN_TO_BE_REPLACED

I lost a few good friends when I wrote the post, “Who’s the criminal? SCLC, Montgomery County or CareSource? It wasn’t something you publicly say when the payroll taxes of CareSource are the only thing keeping the City coffers filled then or now. Once again, the government is pursuing the little guys instead of the END_OF_DOCUMENT_TOKEN_TO_BE_REPLACED

Medicare is a major financial driver for healthcare in Ohio; the government insurance program for the elderly and disabled younger people paid for 41 percent of all medical services at Ohio hospitals last year, according to the Ohio Hospital Association. via Hospitals’ Medicare funding cut over readmissions | www.daytondailynews.com. There is no arguing that America END_OF_DOCUMENT_TOKEN_TO_BE_REPLACED