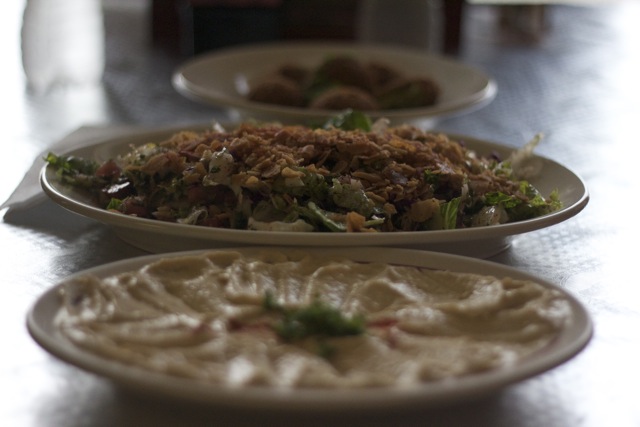 Faez Al Mosawi is one of those immigrant success stories that all the anti-immigration nut jobs ignore. He walked out of Iraq around 15 years ago- literally- a 28=day walk, then came here and started working hard.

Now he owns Halal International Grocery with 2 locations (one in South Park), Princess Beauty supply on North Main- and now- Shish Kabob, right next to his South grocery in the Prestige Plaza development just off I-75 on 725.

A long time ago, this was home to the “House of Kabob”- which went downhill with each ownership change, until it became “Taste of the Middle East” or something like that. Besides being inexpensive, the House of Kabob wowed me with their house-made pita. Realistically- that’s the only thing missing from Shish Kabob- since almost everything comes with pita, they are one step away from fantastic. They’ve been open a week now- and I’ve been twice. They promise to have the pita baking going soon.

We went as the family- and had a whole bunch of different things last week, and I was back tonight. You can’t go wrong with the Fattoush salad for $3.99. It’s got pieces of toasted pita on top of a salad with lots of veggies  and practically no lettuce. With an olive oil and lemon dressing- it rocks.

The felafal is great- both as an appetizer and as a sandwich. Light, tasty nuggets of chick peas and fava beans with special spices. It’s $4.49 for an appetizer plate and $2.99 for a sandwich. I’ve written about his Shawarma before– when they were making it at the South Park Halal. Still tasty- I still prefer it without the “pickle” for lack of being able to define the thing they add to it.

The menu is a bit confusing- if you order the “Entrees” you don’t get the dishes as  sandwiches. Those are down the middle of the menu and they come with soup or salad and a choice of rice or fries. On the right- you get the Sandwiches- which all come as combos with drink and fries.

The place isn’t romantic, it’s kind of confused between a carry-out and a sit-down restaurant- with a lighted menu board- facing the dining room. The kitchen is open – so you can see what they are making. There are three rotisseries going all the time- one with lamb, one with chicken- both marinated by them- and the Gyro mystery meat- which is the de-facto standard at all gyro places. I’m going to ask for a gyro made with the real lamb next time- and see what it tastes like.

The oddness continues with Philly cheese, buffalo chicken, chicken teriyaki on the sandwich menu- it doesn’t tell you it comes on a sub bun- unlike everything else that comes on pita. There is also the connected Hookah bar- run by Faez’s little brother. I’ve got no use for smoking anything- other than jerky, so I’ll leave that for someone else to review in comments.

Other than the Combination platters the most expensive thing on the menu is the Lamb Shish Kabob at $14.95, most entrees are arount $10-11. The sandwiches top out at $5.99

They have fresh juices, and smoothies, sodas, but no alcohol. I don’t know what the policy is on bringing your own.

They do have Turkish coffee, which will probably have more jolt than a 6-pack of Red Bull.

Desserts include baklava – not made in house and Sarah Lee cheesecake? I’d just walk into the connected grocery and you can probably get the baklava cheaper.

It’s still too early to tell what the service will be like. It wasn’t very busy either time when we visited. They do take credit cards.

Stop in and tell them Esrati sent you.

If you enjoyed this post, make sure you subscribe to my RSS feed! If you wish to support this blog and independent journalism in Dayton, consider donating. All of the effort that goes into writing posts and creating videos comes directly out of my pocket, so any amount helps!
Subscribe
1 Comment
Inline Feedbacks
View all comments
wpDiscuz
1
0
Would love your thoughts, please comment.x
()
x
| Reply