The meeting was short. It wasn’t full of drama. Why? Rhonda Corr and Adil Baguirov weren’t in the room. The issues of the preschool staffing were presented professionally, and then, they named Jeff Ireland to be the hearing officer for the disciplinary hearing to fire Rhonda A. Corr. 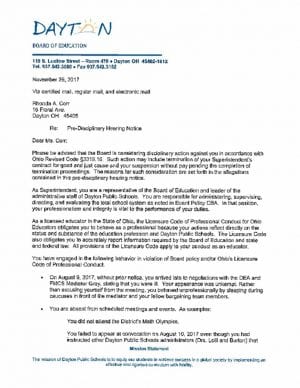 There is a long document, and a short one. I’m posting so you can read each, as much as you want.

When I posted about her divorce and DUI yesterday, I said these weren’t big enough to warrant firing her. They weren’t- except, there seems to be a question of if she was divorced from her husband, before marrying her wife.

On July 1, 2016, you marked on your W-4 form that you are single and then signed the form under penalty of perjury. Court documents reveal that you filed for divorce from your spouse on October 3, 2017, whom you had married on July 7, 2007. The Board had no prior information concerning your marriage.

Shortly after your employment with the Board began in July 2016, you lobbied Human Resources to make life insurance available to employees’ spouses and domestic partners as a rider to the Board’s Hartford insurance contract. The requested benefits were provided. You then purchased life insurance for a “domestic partner” who was already ill and passed away on October 15, 2016. You claimed and received death benefits for a domestic partner even though you were legally married to another person and had not obtained a legal separation.

To the intelligent friend who wrote me that I was wrong to bring up her marital status- I hope to see an apology. For the record, I don’t know who the person was she claimed as a domestic partner- both Cheryl Dzuro and Brad Saegert seem to still be alive and kicking. 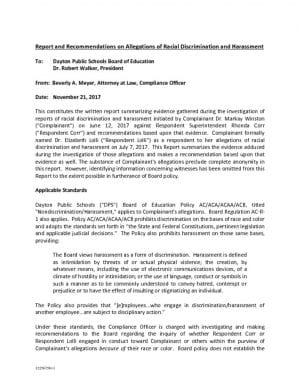 The rest of the report has to do with her foul mouth, unprofessional behavior, tardiness, falling asleep in negotiations, abscesses, lying… you know all the things that come with being a sociopath.

There is nothing in the “Predisciplinary Hearting Notice” about her unwillingness to investigate Dr. Baguirov, her patron saint’s residency. Hmmmm.

The fact that this came out a month after her glowing performance evaluation makes one wonder which board members should be drawn and quartered for signing off on the fiction (see last nights post where the drafts and final are both posted.)

There are still other smoking guns. I’m doing my best to find them all.

In the meantime- read them and weep- and know that esrati.com has been your primary source for this entire soap opera for the last year- unfortunately.

Editors note- someone posted this using an Chicago Public School districts administrator name- they are a gutless jerk. I’ve taken the name off- but am leaving teh comment.
David,

I tried to warn you about Rhonda Corr- Saegert!! She was terrible as a Chief of Schools in Chicago and undoubtedly she continued with her psychopathic behavior in Dayton! I feel so sorry for the teachers and staff but more so for the children. Rhonda is truly a train wreck!

Oh my! The whole DPS Board head need to roll. They knew that her behavior was out of control, yet they continued to entertain her. Excellent research and reporting David!

[…] which as usual, came back to bite them when the lawyer investigating the EEOC complaint un-earthed the real underbelly of the beast, giving the board (with newly added Rev Harris replacing Baguirov) reason to put Rhonda on paid […]

Well deserved outrage. She made my life miserable in CPS.