full disclosure- my firm The Next Wave does work for Quincy’s fish- they had zero editorial input on this.

Heard it here first folks- Quincy’s Fish is moving from W. Third to the old Lou’s Broaster hut location at 865 N. Main St. It’s a blow to the West Side- but a boon to the lower Riverdale area and Downtown. Should be open by Dec. 1, 2014.

This isn’t a ding on opening business on the West Side- it’s a ding on our crappy system of recording deeds, collecting taxes and protecting vacant buildings in Dayton. It’s also good reason to hire a title company even when signing a lease on a distressed building in Dayton, especially if your landlord is a known felon. 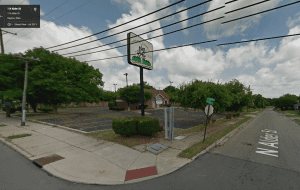 The building, which at one time was a bank and then a Pizza Hut – and lastly “Charlies Angels” had sat vacant for a few years. The claimed owner was Mark Donelson, of Donelson Investments. Former husband of Scherrie McLin, daughter of former political power broker CJ McLin and sister of former Dayton Mayor Rhine McLin- who is now in prison for mishandling pre-paid funeral money in the family funeral home.

Donelson had moved the title into numerous persons’ names during his incarceration and apparently had never actually set up the Nevada corporation, the Donelson Trust of Nevada, to which he had last transferred the title. The owner of Quincy’s found this out- after they had been taken to court over failure to pay rent. Rent payments had been going into escrow, over the lack of an air conditioner, until the matter was settled- which is when the question of rightful, legal ownership surfaced. All of the money in escrow, ended up reverting to the owner of Quincy’s since the judge couldn’t determine ownership of the building. [updated Mar 19, 2015 after receiving a phone call threat from Mr. Donelson]

Despite months of sweat equity and investment into transforming the eyesore back into a going concern, the lack of legal standing of the “owner” of the building made any chance of stability in that location seem elusive.

Enter the old “Lou’s Broaster Hut” or “Chicken Louies” at 865 N. Main Street. Another building that has been adversely affected by failures of our city to protect investors’ investments. First was the closing of the highway access to N. Main street and construction. Then the break-ins through the roof and the theft of metal. Another abandoned restaurant, another reclamation project.

The abysmal record of the Dayton Police in solving crimes by drug seeking junkies who rely on pennies on the dollar for recovered scrap from viable buildings is good reason to pay attention to the County Commission race- where former Dayton Mayor Gary Leitzell is proposing an idea that’s been tested in Europe- giving the worst offending heroin addicts the drug in a controlled environment so as to keep them from causing millions of dollars of damage for scrap.

With the experience on Third Street behind them- the owners of Quincy’s think they can turn the old “White Tower” building around in 30 days and be open for business by Dec. 1, 2014.

In the meantime, the question of the ownership of the W. Third Street building will just be another case of failure of our system of recording deeds and titles. Our current “system”  came along with the relaxation of rules which allowed for the resale of mortgages without physical transfer of deeds- which was in part what led to the financial crisis and housing collapse of 2009. It’s time to stop this malarkey of  digital deed transfers and shell corporations that haven’t been fully vetted. It’s also time to impose penalties on those organizations- be it banks, or shell corps, who hold these buildings without taking care of them. In the end- they cost all of us.

There’s something fishy about this story……

What? More negative feedback? Oooooooh, I can feel my mussels tensing in anger!

I really didn’t think that the original post was going to generate any responses. But, you took the bait – hook, line and sinker!!

From my perch, it looks like you’re getting battered and fried – just what you deserve!

Well, I may be just a little shrimp, but you’re all a bunch of bottom-feeders!

This thread is floundering.

Joe_Mamma – That was a fintastic pun, but you cod do batter if you tried. I’m not squidding about that!! You’re about as clever as a brain sturgeon.

Dave-C – Someone clicked on “bozo” just for the halibut. Your jokes just weren’t up to scale so I’m sure it was done on porpoise.

Us bouys and gils would never make it on comedy central so we should dolphinately scale back on these puns.

How many people have tried Quincy’s? I’ve been herring it’s reely good. If the city commissioners were smart (???), they’d make Quincy’s the ofishal restaurant of Dayton! But they’re trying to be koi so it won’t happen. But they don’t reely know their bass from their sole. But, maybe after a meeting, they’ll head up the pike to try it out. They might just need some more time to mullet over.

OK, it’s up to salmon else to come up with more. But at least Dave, Joe and Bubba have helped this topic avoid turtle disaster.

…in days of yore, in ancient times, like 1995. Hunger pains would invade our brains, compelling us to drive, to Sodom on the Great Miami, to North Main near Riverview, to the 24 hour chicken shack, owned by Chicken Lou. When the Zig Zag man, took his midnight leave, after numerous bong hits. The addicted and afflicted were left, with massive hunger fits. But they were sure to seek the cure, for as every stoner knew, a gnaw of the bones, solved the munchie jones, after a trip to Chicken Lou. Hookers trolled the parking lot, and in the parking lot, lay the latest victim who’d been beaten, stabbed or shot. But of course, we walked over the corpse, our goal we would pursue. Into the Valley of the Shadow of Death, we’d go to Chicken Lou. We’d go into the lobby, the front door we would pass, and shout our orders thru the little hole, in the armor-piercing bulletproof glass. Our order slips within our grips, we’d slip into the queue, the best and worst of Dayton, were always waitin’, in the line at Chicken Lou. And once the wing bag was procured, we’d go to our cars real fast, to evade the beggars, geeks and freaks, small arms fire and shotgun blasts. We’d start our rides to save our hides, and down Main Street we flew. danger was no stranger to the patrons of Chicken Lou. Louie’s chicken secret was not frying, bake or roasting, but the pressure cooking miracle, that is known as broasting. “Juicy not dry” the faithful reply “it’s too good to be true.” No one left unhappy after trying Chicken Lou. In Celina, New Bremen and Versailles, where chicks are hatched and reared. when Louie needed re-supplied chickens proudly volunteered to jump into the broasting pot a fate they did not rue, for only the best legs, wings and breasts were served by Chicken Lou. Harlan Sanders ate a Louie wing and became morose and repentant. “I’m not the Colonel of chicken,” he cried, “but a mere second lieutenant. “I would started a hot-dog… Read more »

@Ice- I’ve missed your poetry. Bravo on your latest masterpiece.
Thank you for this- from me, and all the punsters.
The good news is- Quincy’s broasts their chicken, just like Chicken Lou.
I think you’ll be happy.

Of course, the Ol’ Bandito puts the rest of us to shame!! If I ever run into you in the lobby of Quincy’s, your fish is on me! :)