We know that Sheriff Phil Plummer hires racists, he “fired” two of them for sending racist texts (only they took full disability retirements after they were caught).

We know he hires and promotes miscreants who like to torture people with pepper spray, while restrained.

And, as the Washington Post just published the story of the latest pepper spray event, with video provided by yours truly, Phil Plummer has another problem child entering the spotlight. 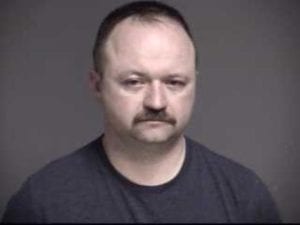 Meet Montgomery County Sheriff’s Deputy Douglas Carl Gearhart, who is currently residing in a much safer jail than the one Phil runs- booking number 20170583  at the Warren County Jail, arrested today on two counts of domestic violence. We’ll have to wait until Friday for his next court date, and currently there is no bail. Hopefully, his wife is OK.

Gearhart was rumored to be on the promotion list for sergeant, which would probably have put him in the Montgomery County Jail for a tour. Maybe, he’s just doing undecover research for Phil on how a competent jail is run?

Given his bad behavior, Plummer will probably fast track his promotion. Sadists are his favored type of officer.

We’re currently working on additional stories of issues in the Montgomery County Jail. Not just the lawsuits, but how and why the jail has become a lawsuit liability machine under Phil Plummer.

There is another fatality I believe that came from these incidents that will keep occurring until investigators can put a stop to it, but until such time this will continue.

lets not forget what has been mentioned on this blog about the sheriff’s imparities involving other issues left to a task force to sweep under the rug. Just look to the previous posts on this blog reveals the truth and nothing but the truth!