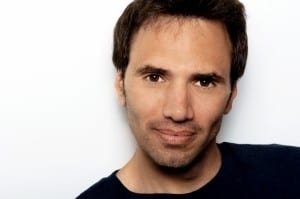 I don’t normally interview entertainers on this site. The closest I come to comedy is when I quote the editorial board of the Dayton Daily News- and they really aren’t funny. So when a publicist asks if I’d like to interview comedian Paul Mecurio- I first have to look him up- because I’m usually too busy writing stuff for you to have time to watch Comedy Central- or TV at all.

But one thing in his bio interested me. Here’s a guy who left Wall Street to do stand-up:

A native of Providence, Rhode Island, Paul Mecurio graduated with high honors from Georgetown Law School and began his career on Wall Street as a mergers and acquisitions lawyer at the law firm of Willkie, Farr and Gallagher and later as an investment banker at CS First Boston. All the while, Paul was honing a secret, second career writing and performing comedy in New York City. After several years on Wall Street, Paul moved center stage, leaving Wall Street and starting his career as a stand-up comedian.

I got in touch with him as he was driving back from Indy where he’d been on the Bob & Tom show. He’s in Dayton at the Funny Bone until Sunday- so if you want to hear the guy who writes jokes for everyone from Leno to Jon Stewart- get your tickets now.

One has to wonder about a guy who goes to Georgetown Law and leaves a high-paying, relatively safe job on Wall Street to become a comic.

I’m not a shrink, but I’m pretty sure his parents needed one when they heard the news. Obviously, after the mess the boys on Wall Street made of the country- we know who is laughing now. Paul had some interesting views on politics- including the one I share- that we’d do better to pay for the campaigns, give them 3 debates and 2 town halls and get done with it. When I asked about his favorite political fodder- his first response was our own John Boehner- followed by the easily mocked Sarah Palin- and he lamented the loss of George W. Bush with his remarkable ability to smirk at all the wrong times- which Mecurio blamed on…. well, either listen to the recording when I get it up- or go see him.

He thinks Al Franken has as much of a right to be in Congress as the rest of us- and reminded me that you have to be pretty bright to do satire well. He credits the Socratic method from law school for great prep to be a comic. Asked if he would ever consider running for office, he said the bodies in his trunk would probably come back to haunt him- which is unfortunate, because the clowns we elect now don’t have the witty  comebacks. The fact that so many of these goofballs- the latest being the former Congressman from New York, Christopher “Craigslist” Lee- can’t seem to do their jobs is laughable, but hardly funny.

At one point Paul, after learning I was in advertising for my full-time job- tried to blame my industry for the current crop of weirdness that we elect- to which I had to correct him- it’s not the ad industry making money off campaigns, most reputable ad agencies don’t touch political work, it’s the media companies- the newspapers, radio, television networks that love the boost that comes to their bottom line every two years.

I don’t get out much these days- but, if I was going to catch a comedy show this weekend- I’d head over to see Paul Mecurio at the Funny Bone. Face it- he gave up billions in bonuses to become a stand-up, and for that- we should try to help boost his bottom line.

…no question, dear David, that the Bush administration was a certified hoot-fest. And perhaps it’s the peculiar way the media covers politics. When Hillary Clinton took that flying header on that plane last week, it inspired the talking heads to openly comment on concerns for her safety. But had John Boehner had that same I’ve-fallen-and-I-can’t-get-up moment in front of the tv cameras, it may have revived Chevy Chase’s career. And as far as mockery, dear David, Sarah Palin is no more target-rich than the bumbling bunch that inhabits the palace on Pennsylvania Avenue currently. But then again, dear David, nobody is laughing now……..

I don’t know how funny he is or isn’t, but for sure he’s gorgeous!

I don’t know how funny he is or isn’t, but for sure he’s gorgeous! – Susan

OMG!!  You got that right, girl!!  For sure, he IS gorgeous!!!!  Oh, those lips!  Those eyes!  Who cares if he’s funny or not! I’m going to have to check Google for a full body shot of that comedy god!

There are quite a few images out there, but, alas, none shirtless: http://www.google.com/images?q=“paul mecurio”

“There are quite a few images out there, but, alas, none shirtless” – D.L.

DL, you really need to get another hobby! ;)  When I posted about the old, misspelled Carlisle Restaurant sign, you Googled it.  Now you’re Googling for shirtless images of a comic.  Will you just agree to be my personal research assistant? ;)

“There are quite a few images out there, but, alas, none shirtless: http://www.google.com/images?q=“paul mecurio” -D.L.

I’ll just have to use my imagination!