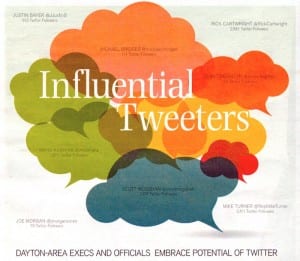 Esrati named one of Dayton’s most influential tweeters

Dayton Business Journal lists are sort of like David Letterman’s top ten lists- they have one every week, sometimes two or three. You have to be kinda in the know to understand that they aren’t scientific or even very accurate, but, still- it’s nice for them to recognize me and a couple of people I know, respect and follow:

David Esrati @esrati 512 Twitter Followers. https://twitter.com/esrati – Esrati uses Twitter to promote his blog and his own campaign for City Commission, as well as to commentate on the mayoral election and controversial issues in the city of Dayton.

I also tweet as @thenextwave about marketing and advertising, although not as often as on @esrati.

There is no such word as “commentate.”

Dad claims, “There is no such word as ‘commentate.’ ”

Descriptivist grammarians would disagree with you, Dad, having observed “commentate” in the wild since the late 18th century. See m-w.com which says “commentate” was first spotted in 1794, or see dictionary.com, which says:

Since the late 18th century, commentate  has been used transitively with the meaning “to annotate” and, since the mid 19th, intransitively with the meaning “to make explanatory or critical comments.” These uses are now rare. Recently, commentate  has developed the additional transitive sense “to deliver a commentary on” and the intransitive sense “to serve as a commentator.” These uses are occasionally criticized as journalistic jargon.

You can “criticize [commentate] as journalistic jargon,” but you can’t deny that it’s a word. Try to keep people from using “commentate” if you like; I guess there are worse hobbies.

wow…  David, you need to come up with something more insightful and interesting to blog about.  Apparently when nobody has a strong opinion, we move into discussions of the english language?  btw…  if you can’t use the word “commentate”, then you can’t use the word “commentator”, as without commentation, there would be no commentatoration…   (sorry, kind of a slow day here…)

@Dad- I didn’t write it- the Dayton Business Journal did. And- there are lots of new words slipping into the English language thanks to the Internet- like blog, commentate, trackback, spam (not your favorite lunch meat) google, etc.

And- @Another Public Servant- it may not be insightful or interesting, but, it is an “accomplishment”- that some would use to pad their resume. No different that being “Dayton’s Best _________” which is usually voted on by a flawed internet poll these days that can easily be gamed.

I don’t worry about my Klout score either- I know from my stats when something is being read, by how many people- and if it’s really pissing someone off- since my phone then starts ringing or getting texts…. you’d be amazed at who tells me what, in very long text conversations.