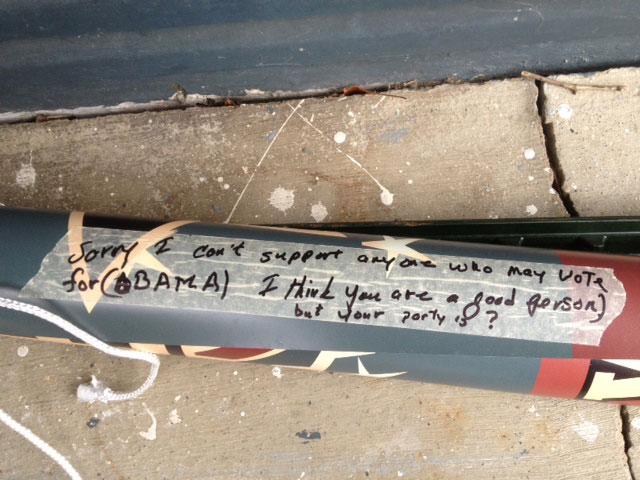 Last night was the big gala event, “The Hermes Awards,” for the American Advertising Federation Dayton chapter where local work is recognized for excellence. Two of our campaign pieces were recognized, the logo and the foreclosure video. It’s rare that political work ever shows up in these competitions, but, this is the second time we’ve done it; the Big money spot was recognized 4 years ago. Since there isn’t a category for low budget online ads, we were up against some very tough, big budget work and deservedly, didn’t win the gold. The spot by Real Art that won in our category was phenomenal, with a kid starring in it who was all pro. To their credit, they shot the spot in Dayton- bringing in national level actors. It hurts to admit it- but, I was beat by a 10 year old. Real Art has a “behind the scenes” video about making their winner here: http://blog.realartusa.com/index.php/2012/01/gone-n-u-t-s-o-case-study/

Note, there is no behind the scenes short about the video- we filmed our spot in about an hour and a half, edited it in a day. We also illegally entered the red cottage- which had its door wide open. Not quite the same as flying a kid in such a big jet that they had to land it in Cincinnati (according to the Real Art person accepting the best of show award for the spot)

We won a silver, which is eligible to advance to regionals for Foreclosure:

More than a few ad pros mentioned they’d seen my big 3×5 signs around town. Yes, they look different, but the other thing is you don’t see them at highway entrance ramps, in the median, on empty lots – only on voter-owned land with permission of the owner. Well, except for in Washington Township where one of my supporters who lives on Mad River Road got a certified letter yesterday demanding the sign be removed. Apparently, freedom of political speech doesn’t apply there, with severe limits on sign size and placement. The two page document included photos of the offending sign and chapter and verse on why it couldn’t be there. . At least it was up for 8 days.

I guess Washington TWP hasn’t heard of Citizens United yet either- where corporations are now people. Political speech is above and beyond their legal authority these days.

A friend in AAF Dayton owns some property zoned light industrial on 48 in the TWP, and volunteered his prime space for a sign- I’ll be putting it up today :-)

I had to pick up a sign that I’d placed on Dayton Xenia road as well. After I put it up, the homeowner called me and asked if I supported President Obama, to which I answered of course.  I found the sign neatly wrapped up with the two poles on his step. It had a piece of masking tape on it- where they wrote me a note:

Esrati is a good person

There are laws about campaign signs, yet the people who hope to make them, break them. I wrote about this last election cycle: Illegal Signs from the people who make the laws

To me, wild postings of campaign signs are the lowest level of political speech. The signs have no meaning except desperation unless they are a meaningful representation of a voter’s support. I’ve tried to make sure that my signs  are only placed on private property, with permission of the voter- and on main streets. Today and next week I’ll be working to get my small signs up on major streets and near polling locations. If you would like to help, please drop me a line at david at elect esrati dot com

Campaign signs don’t explain positions, they don’t inform voters, they just litter up our streets. I’m still seeing some Schooler/Walker signs that are still up from last fall.

I’ve not posted about the Fayette County Democrats’ dinner last Sunday yet.

I started to write a quick note about it- then realized- I may as well post it- so I’ll be posting it right after this post.

It’s worth mentioning that there were some deviations from the standard campaign stump speeches- and Ryan Steele showed some political teeth. See the post.