I saw the most amazing basketball game last night and it only cost me $7. I’m not a huge basketball fan, I almost never watch it on TV, I couldn’t ref a game to save my life, but, I’ve seen my share of games from the “White Men Can’t Jump” courts on Venice Beach to NY City Street ball, to Kobe Bryant and Shaq playing for LA against the Pacers, with a whole bunch of Dayton Wings games, UD and WSU games in between. 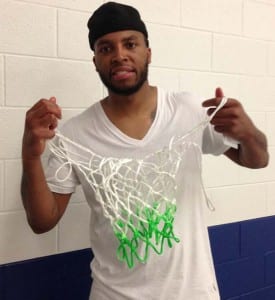 Daequan Cook likes the green nets on courts in Dayton 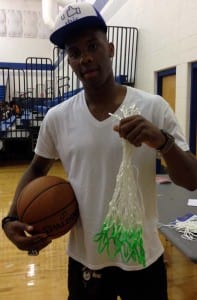 Norris Cole, holding a green net from the hoopsdayton program

None of them had as many dunks, alley-oops, treys or pure athleticism as what I saw last night at the Local Legends game sponsored by Daequan Cook and Norris Cole- our local legends now playing in the NBA. Cole sat the game out, but Cook showed off an amazing array of skills, including some drives that took the word misdirection to a whole new level. From bobbing his head like a chicken as if to go left, but flying right, to slalom mastery at full-speed, juking, dodging and spinning his way to a basket like a rocket without stabilizers with the ball miraculously going through the net.

While there was little emphasis on defense- the score was in triple digits with over 6 minutes left- it was a serious game, with Cook going down on hardwood once and taking some time to get up. Considering the age range on the court was from 20 to near 50, the passes, the dunks, the tempo moved like lightning. I’m not sure if Dwight Anderson was the oldest guy out there, but the blur still had game, even if he did get called for “aggravated assault” over the PA when he fouled Cook.

What made it even more fun for me was watching two women play with the boys and hold their own. After the game, I got to talk to Brandie Hoskins who has been playing international ball, as well covered by Tom Archdeacon in a story yesterday:

Coming out of CJ she was rated the No. 2 prep recruit in the country by one national publication. At Ohio State — where her junior and senior seasons both ended with Achilles tears — she scored 1,462 points, had 471 assists, 347 rebounds and averaged 52.9 percent from the floor.

After her injuries derailed her WNBA efforts in Seattle, she went to play in Greece, Portugal, Israel, Ukraine and the past two years for teams in the Romanian cities of Craiova, Brasov and Bucharest.

“Overseas isn’t for everyone, you’re out of your comfort zone — but I try not to forget that I’m doing what I love to do,” she said. “And I’m keeping my dream alive.”

She and I talked a bit about my campaign and the net hanging, and she wouldn’t shake my hand because hers were covered with fried chicken, but she did give me a big hug which made my evening.

I got to talk to a bunch of the players about the campaign, as well as to some of their mothers (Mrs. Cook is a sweetheart) and they were all supportive of what I’ve been doing. Cook has retweeted the video and Mrs. Cook said she’d seen it and had wanted to meet me. All that was accomplished because my friends Culpatrice Foster and Eva Costa who organized this event think that what I’m doing with www.hoopsdayton.org and my campaign is a great value to our community.

While other politicians would have had their picture taken with the stars- I took pictures of Daequan and Norris holding up the green nets, because to me- those nets should be more visible than me, and the deeds of your commission should be more evident than their faces. One thing I’ve learned about pro-athletes, from my work with the Dayton Dynamo, the Dayton Wings and the Dayton Bombers- the guys who go the farthest are usually the nicest. I’m happy to tell you that both of these young men are off the charts polite and worthy of role model status.

When they hold this event next year, don’t miss it. And hopefully, they will be playing with green nets.

As a side note: Before the game started, in Dunbar’s relatively new gym- I noticed one of the nets had a hanging loop. I asked if they wanted a fresh net- and ran out to get my ladder and nets. When I started looking at the net, it was a type of rim that I’ve only encountered in one other place- it has a continuous sub rim loop with gaps for the net to attach in- with a wire that passes around the sub-rim and catches a loop at each gap. In this mecca of Dayton basketball- in our brand new building- the wire was busted- and there was already an improvised wire loop holding one loop up and I added a zip tie to hold the other up. It’s sad that even in Coach Pete’s parlor, where basketball legends are born- we can’t make sure our investment is being maintained.

And as a final note: Tom Archdeacon came out on Tuesday to interview me about the green nets. He had been involved early on in the video- volunteering to come in and talk to my two interns, J’ai and Cory, about how you tell a sports story. He spent an hour talking about how to find the emotion in a story- and how you build something worth reading/watching. Now that the video was done and I’d hung over 180 nets, he thought it might be a good story to tell. After the hour and a half interview- which he taped – (literally- on micro cassettes- not a digital recorder) and drove around with me to see my handiwork, he put in the story for a photographer. The powers that be put the kibosh on the story- calling it “an endorsement.”

My response to Jana Collier, was that if I’d been in an auto-wreck and hurt a kid, it’d be front page news, but, by doing something good in the community and different from any other candidate- it wasn’t newsworthy- was heard, but they think they will just let the city hall reporter cover it when the election rolls around. This is why the Dayton Daily news sucks as a paper.

I’ve since forwarded the story to national news outlets- and even had a nice response from Frank Deford who covers sports for NPR:

I enjoyed the tape.  It reminded me some of a wonderful photo essay I saw years ago by some European photographer who shot photos of basketball backboards all over the world.  It is a good story.  Perhaps I can use  it in an NPR commentary sometime.  Unfortunately, it isn’t enough in that space to do a stand-alone piece, but it could very well work in some broader commentary.  Thanks very much.

Please watch the video again- with the better audio, to pick up some likes, and share it with your friends. J’ai and Cory would appreciate it.
https://youtu.be/TgFI434RV8Y
If you enjoyed reading true breaking news, instead of broken news from the major media in Dayton, make sure you subscribe to this site for an email every time I post. If you wish to support this blog and independent journalism in Dayton, consider donating. All of the effort that goes into writing posts and creating videos comes directly out of my pocket, so any amount helps! Please also subscribe to the Youtube channel for notifications of every video we launch – including the livestreams.
Subscribe
1 Comment
Inline Feedbacks
View all comments

The DDN did finally write the story of the nets- front page of the local section. It wasn’t Archdeacon, but it told the story: http://esrati.com/the-reality-of-a-publicity-stunt-esrati-puts-nets-on-rims/10309/