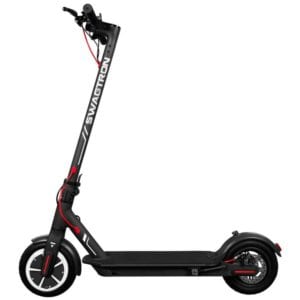 Every major city I’ve been to lately, has them. Even minor college towns like Oxford. Electric scooters are everywhere. To pay by the minute, as you slalom through town. Companies like Bird, Lime and of course the granddaddy of four letter transportation company names, UBER are all in the scooter rental biz.
But, here’s the thing, you can buy one of these and unlike a bike, throw it on a carry strap and take it into your office, a restaurant- and keep it handy. As the person who introduced Dayton to B-cycle and bike sharing, I’ve been keenly watching these scooters challenge bike sharing- with their dockless distribution and lower cost model.

When you combine a scooter with the new Free RTA Flyer downtown shuttle- you can easily reach fringes outside the B-Cycle loop- for that “last mile” functionality.

My big question is why wouldn’t you buy your own? I’ve been thinking about one of these for a while, and just saw this deal on Amazon for the “SWAGTRON City Commuter Electric Scooter, 18mph on 8.5“ Run Flat Cushioned Tires, Cruise Control, Phone Mount, APP Controlled, Foldable, Portable – Swagger 5 Elite Official Ride of The Chicago Cubs“

Not sure why I think I want the scooter of the Cubs… but, here’s the thing, it’s on sale for $271. Buy one for you- buy one for your kids. And, voila- reduced carbon commutes to the grocery store, a run to Ben & Jerry’s, or just a quick way to get from A to B. With our bikeways- some of you might actually be able to commute on one. Just make sure to always wear a helmet- and consider getting a safety vest to be seen, since they haven’t over run Dayton yet. As a motorcyclist- I also highly recommend gloves anytime you are on 2 wheels- just because if you do go down, scraped skin on the palms really sucks (first hand experience long ago).

The reviews of this scooter are generally good. I’m pretty sure most of them are made in the same factory in China, and just rebranded. If you want to look at the Swagtron site- the scooter is $350 with a $50 off coupon, so Amazon has that price beat.

You want folding- to make it easy to store. It has an app that’s of questionable functionality.  Some allow you to lock your scooter- this one doesn’t. The scooter has a headlamp- which is absolutely critical.

If you do buy it- and kill yourself, I’m already writing this disclaimer- use at your own risk. Since you’ll be on Dayton’s bleeding edge of users, the risk increases until drivers get used to them. And, as a motorcycle rider- I can tell you drivers with cell phones still haven’t figured out motorcycles or bicycles yet, so be safe.

These are a lot of fun though, just like they were when you were a kid. Only thing is- this supposedly supports up to 330 lbs!

For lime scooters, you can reach out on behalf of a university or city to bring them to Dayton.

I may have filled them out on behalf of our city commission, mayor and manager every two weeks for the last six. Stuff the lime form!

The cities where these shared scooters have been dumped (literally dumped) are seeing backlash from residents. When they hit a car, they do not take full responsibility for damage, and are left anywhere and everywhere like litter. We have a great bike share program where the bikes are docked and accounted for and not strewn about the city. Granted, the bike share is 99% for East Dayton and UD’s enjoyment, but still a great program.

Funny name there “Scooter Libby”- and I’ll let you slide with it for this post.
There are stories of tow yards with literally hundreds of “dumped scooters” in impound. The good news, is for about $30 you can hack one back into a normal scooter. https://boingboing.net/2018/12/08/flipping-a-bird.html/amp
The bad news- bike and scooter riders still risk life and limb thanks to distracted drivers.
Docks would solve some of the scooter trash issues- but, we’ve actually seen a move to dockless bike share as well.

This is odd. Puzzling.

Hello. I been seeing these scooters in other cities. They look fun. I have a bike on my car. Its fun. My bike is certainly cheaper and not very tempting to thieves. Those scooters are 15cents a minute plus a dollar. So riding for an hour in a day will cost $10. Its easy to see $100 spent in one summer. So Im more in the buy your own category. Then stow it easier than a bike in my car and always have easy transportation even when your car breaks down. As for the “litter” complaints, I just dont see it like that. They are pretty sleek. I dont see them as eye sores. Haters have protested and made piles with them in some cities, but this is a rare occurance. Because every night there is a team that shows up and gathers up all the scooters. They are then taken to be recharged and repaired. They are then brought back by 6am the next morning all lined up neat and ready for another days rentals. So any “ugly” that people object to is ALWAYS eliminated in less than 12 hours. The only caveat that I see is the road accident situation. Hit and runs would be way easier. But this is also the age of dash cam videos for $15 at Walmart. So it will be hard for even the fleety scooter rider to not be recorded in living color to be latter apprehended. So Im not too worried about this aspect. So the only thing left is if scooter companies can make enough money in small cities to make it sustaining. They get damaged in use and homeless people jail break them for their own private use. I have been told that in every scooter city, each homeless person has 3 jail broken scooters stashed away. And more are broken into as existing scooter ghosts wear out. The gains in little Dayton have to out weight the losses or the scooter program will not endure. Especially when theres no scooters in winter time. So I say make it… Read more »