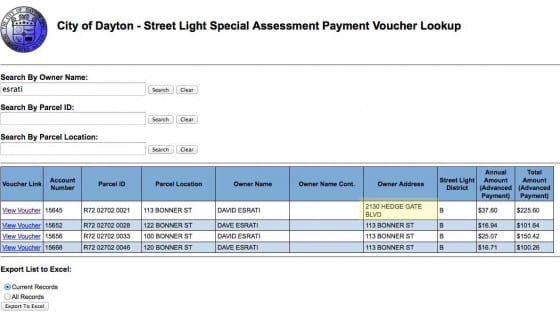 Time to prepare the letter- stuff the envelope with the 4 checks totaling $577.92 to return, had to cost another $20 in labor, paper, envelope etc.

Instead of getting their money now, they’ve turned it over to the Montgomery County Treasurer- adding additional costs- of data entry, and adding to bills- in an installment plan over the next 6 years.

Instead of cash in hand, they now get it in six payments.

All because they claim it wasn’t received by their deadline- despite being mailed in the same city 2 days before.

This, is what we call in business, STUPID.

This is a horrendous waste of taxpayers’ money.

Just opening letters and posting the accounts would take them days.

Having a hard deadline, while they may think makes things “fair”- without an unofficial grace period, is cutting off your nose to spite your face.

And note, since none of my four assessments was over $250, they never mailed me anything.

The only reason I knew where to go to find out the amount that was due- was because they had sent my father an email with a link to the site with the amounts.

There I was amazed to find out that someone in Beavercreek owned my house.

Still incorrect: Go to http://maps.cityofdayton.org/public/SLSAPrePay/Default.aspx type in my last name and see this (screen shot above):

Apparently, the city IT people are incompetent as well- after talks with someone in the treasurer’s office, they determined that the city was pulling from the wrong data field- and that on my house record, someone had transposed numbers back in 2010 and fixed all the main screens- but just not this one.

Calls to the city weren’t returned in a timely manner- and the issue is obviously still not fixed.

Ms. Smith ends her expensive letter with “We appreciate your support and apologize for any inconvenience this may have caused you.”

How about, “I’m sorry, we like to waste your tax dollars, and cost the city money, because we really don’t know what we’re doing.”

If I was a city commissioner, I’d be asking City Manager Tim Riordan about the competence of his staff. Maybe if they weren’t so busy giving money away to businesses and developers to keep them in Dayton, they wouldn’t be turning their noses up at cash being sent to them.

Soon after posting this, Kerry Gray, assistant to the City Commission, called about this. He took notes to pass to the commission. He told me that only 1.7% of the properties attempted to pay in advance. Can you say #FAIL

I have found that if you pay the city by credit card (on IVR system) it is instantaneous. Any other online method add 72 hours. Mail to the Cincinnati lock box can take up to 5 days..
YMMV

I tried to pay for my dog’s license on the county’s website. Since my CC billing address is different from where the dog’s house, it rejected the credit card. I called the county back in January of 2013 about the issue. Their IT folks are the ones that figured out it was a problem with the address. As of January 2014, it’s still not fixed. Yet one more example of incompetence.

I don’t live in Dayton anymore, but have occasionally done business with City of Dayton over the years. Amazingly incompetent, inefficient, bizarrely convoluted….sorta like a soviet-era bureaucracy.

Any hope of economic prosperity for City of Dayton will only come after this bureaucracy finally collapses under it’s own weight. This could take decades.

Damn! I wish somebody in Beavercreek owned MY house! Some people have all the luck. :-(