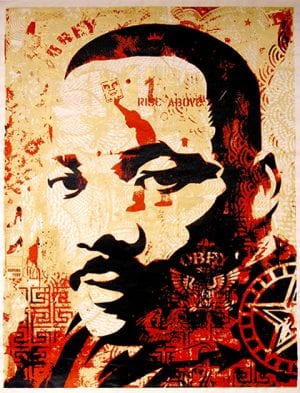 My father told me he used to have lunch with King while they were both students at Boston University, on Thursdays. They’d argue. Dad was Malcom, Martin was Martin. They disagreed in the methods of effective change.

Being an activist then was hard, getting the word out required a lot more leg work, coordination, organization. There was no twitter, no Facebook, no meetups, no YouTube, no gofundme.

When King died, there wasn’t much of an estate, he’d even donated the money from his Nobel Peace Prize to the cause.

The following is fiction. What if MLK was magically 39 today, and still fighting the same battles, or slightly different ones. But, hadn’t won the Nobel, or gained a following. The scene is at the King household in Atlanta. Gathered around the table are his wife Coretta, Ralph, Jesse, Hosea, Joseph and Fred. They’re discussing their next move.

Coretta: Here’s some chicken from Popeye’s, fellas, dig in. Sorry, it’s the best we could do- money’s a bit tight right now.

MLK: It’s OK honey, the cause is more important than having a big fat bank account.

Coretta: I don’t know Martin, I’m looking at Brother Creflo, across town and he’s rollin in the dollars. You ought to spend more time in your church than out in the streets.

Fred: You know, that time you spent down in jail in Birmingham, maybe we should have setup a gofundme and taken that money and bought us a few new video cameras and a Sling- so we could broadcast live at every event.

Jesse: Video is so important these days. It’s not just the broadcast, but, if your channel has over 1000 subscribers and 4000 hours, you can monetize it on Youtube.

Coretta: He doesn’t even have 1000 followers on Twitter, it’s hard cutting through all that mess. Maybe you ought to antagonize the president and get him to tweet about you.

Jesse: You know no one likes to march. It’s easier to hit the like button, or sign an online petition. Someone has to get shot these days to get people out in the streets- like those kids in Florida. Martyrs are in, marchers are out.

Fred: Maybe we should go back to just preaching, and politicking from the pulpit. The IRS is so overwhelmed with all those tax cuts they are never going to come after us for the Johnson Amendment- hell, they almost cut it out of the tax code last December.

Joseph: I keep looking at TD Jakes and think, dang, that guy could pay his people to march. We’re doing it all wrong.

Fred: Yep, aligning with the democrats and being their lapdogs, delivering black voters to the polls, why are we still doing that anyway? Lincoln was a Republican and he freed us. What has the democratic party done for us lately?

Coretta: Not a thing brother Fred, not a thing.

Jesse: I asked for their support when I tried to run for office. I didn’t get any help.

Coretta: Preach! You know there’s money to be made out there. You know how it works, the golden rule, he who has the gold, makes the rules. You brothers best get busy bringing in the Franklins.

Hosea: You know all those big time preachers have a book. Maybe we ought to write one together?

MLK: I wrote 5 already, had to self-publish. Amazon made money, I’ve got diddly. Money ain’t flowing in publishing these days. It’s almost as bad as the newspaper business, but not quite.

Fred: I’m telling you, we need to start our own TV channel. Those cameras would come in handy. Look, someone has to tell our story to the masses.

Joseph: I don’t think people really care that much. Half the countries got their noses buried in their phone all the time, half the countries high on medical mary jane, and their all watching Netflix or Hulu.

Fred: See, video is the key. I keep telling you.

Coretta: who gave you guys the torch anyway? Why should anyone listen to any of you. What makes you special? Nobody elected you to “lead the movement.” When am I going to be able to buy a G-Wagon like Mrs. Dollar? I wish you’d focus on your parish instead of on all this protestin and stuff. Ain’t no money in that.

MLK: If we can get a universal basic income everything changes. Then everyone can afford to put a little extra on the collection plate on Sundays honey. I’m telling you, for an old white Jewish dude, that Sanders guy was my choice for just that reason. Plus, with our four kids- college would be paid for. Instead we got this whack job.

Hosea: How many times we going to talk about the same thing? Ain’t going to change nothing. 50 years ago, it was the Klan killing brothers, now it’s overzealous cops. Maybe we should have listened to Malcom X instead of this peaceful route. We can go buy AR-15’s too. They aren’t that expensive.

Joseph: (laughing) Y’all now if we start showing up with AR-15’s in the street, they’ll start banning them in two seconds flat.

Coretta: Now you guys are just plum crazy. Stop all this nonsense about guns, protests and what you’re going to change. Nothing changes without the almighty dollar and between all six of you, you don’t have enough to buy this here chicken. Whoever heard of a political activist in the 1%. You hear about “activist investors” all the time. Now get outta my kitchen, so I can clean up. Martin, you best be hitting the streets tomorrow to find a real job that puts money in the bank account. Cell phone bill is due on Friday and we don’t have the money to pay it.

I don’t know how many times I’ve been told to either just leave town, or leave the politics alone. That making money matters more than following your principles. Monday, I lost a long time client over my politics. My friend Shepard Fairey wrote me about the post “Good post! A clear conscience is not possible with a purely capitalist mindset. The market creates as many problems as it solves. I’m very glad that you wrestle with that like I do.-S”

Yesterday I landed a new client that will bill considerably more.

And today, I found out that I’m the lead quote for the discussion of the media on the “Make me smart” podcast from American Public Media with Molly Wood and Kai Ryssdal; 56: “The best cure for hatred and ignorance”

Sometimes it’s just dumb luck who becomes the leader who is remembered in the history books. And sometimes, it only happened because they were too stupid to join the herd.

If there is one good reason to change the 2nd amendment, it happened 50 years ago today.

I can’t imagine what MLK might have achieved had he just lived to see 50, or what he’d say today about the shooting of Stephon Clark or John Crawford.

Stepping up for your principles has a cost. MLK paid the ultimate one for all of us.