There’s never a missed opportunity for our half-a-million dollar Mayor, Nan Whaley, to grandstand. Be it accepting refugees that aren’t coming, or banning travel to North Carolina and Mississippi over stupid legislation against the LGBT community. If there’s a front page story to be made out of making a proclamation or an informal resolution- she’s on top of it.

But, let’s talk about a local travel ban that the city created and now can’t find the “$35,000” it will cost to fix- and the costs the city’s lack of foresight cost a small local independent business.

For decades, 865 N. Main Street was the place to get fried chicken in Downtown Dayton. Chicken Louie’s was an institution. When Lou fell into poor health, the restaurant closed. Because the city of Dayton can’t keep a building safe from scrappers, the building quickly became a very expensive prospect to reopen. Plus, the hundreds of millions of dollars being spent on I-75 through Downtown, were also taking their toll on businesses near the construction.

In November of 2014, a business that had begun on W. Third Street, rose to the challenge to bring fried chicken back to N. Main. Plans, permits, inspections, and almost 18 months later, they soft-opened this week. No big grants from the city, no tax abatements, no tax credits- a legitimate, small business opened back up in the old Chicken Louie’s- welcome back to Quincy’s. (Full disclosure- I do the advertising for them- and, they didn’t ask me to write this article).

Only one slight problem, when the city bulldozed a whole bunch of apartment buildings and built a brand new Great Miami Boulevard- they cut off the second entrance to the parking lot. Yep- made a little stub of a driveway- but, no access from the boulevard, only from N. Main, right at the light- making left turns into the lot a mess.

The city, which bought a building on Wayne Avenue for $450,000 and then sold it to a developer from out of town, and gifted them Garden Station as a bonus- can’t find $35,000 to replace the apron and access that they “improved” off the map. Here’s an aerial view courtesy of Google Maps- the yellow area is where a driveway should be- but now has curbs, grass and trees planted. 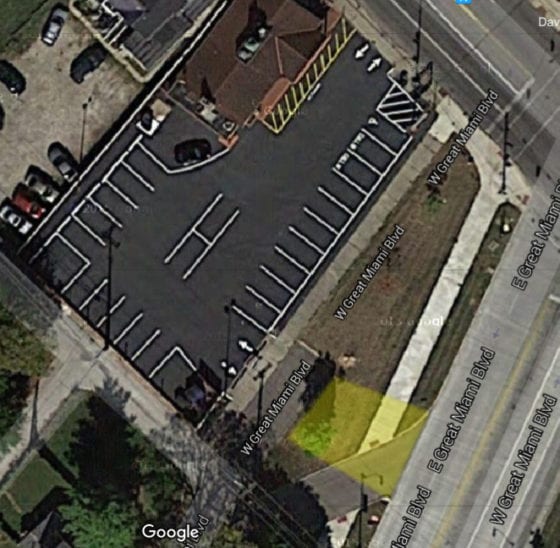 Can Dayton put a driveway back in please?

This is similar to what they did to the old Wympee on E. Third street- when Olive Dive went to turn on their gas main- it turns out that the city had cut the gas line when replacing sidewalks- and was going to try to stick the tenant with the bill.

How 25 feet of concrete or asphalt becomes a $35,000 expense is beyond me. Why the curbs and access hadn’t been worked out and replaced well before the opening is also beyond me. But, I guess real “Economic Development” and a commitment to local small, independent business doesn’t make either the headlines- or, Miss Nan would have taken care of fixing this mistake already.

When people talk about being “business friendly” – it’s about a government that takes care of things like this and thanks the small business for bringing a building back to life. If I were mayor- this kind of bullshit would never fly, and I’d have rented a Bobcat and cleared the path myself, before they opened if I couldn’t get the city to act. A load or two of gravel over what I cleared would be a better start than leaving it as is.

Considering the only thing Nan has proven herself good at is making holes like the one on Ludlow where the perfectly usable Schwind and Dayton Daily News building were- she should be able to get a bulldozer over to Quincy’s on Monday and get this problem taken care of, $35,000 or not.

It’s a tiny investment compared to the value that having this building back in use pays back to the city.

In the meantime- go get yourself some chicken and fish, and be super careful entering and exiting the parking lot.

If you enjoyed reading true breaking news, instead of broken news from the major media in Dayton, make sure you subscribe to this site for an email every time I post. If you wish to support this blog and independent journalism in Dayton, consider donating. All of the effort that goes into writing posts and creating videos comes directly out of my pocket, so any amount helps! Please also subscribe to the Youtube channel for notifications of every video we launch – including the livestreams.
Subscribe
18 Comments
Inline Feedbacks
View all comments

I am so glad to know they are open again. They served us well after long nights of hanging out at the clubs. Now that I am older I can go early and bring my food home and really enjoy it. Lol. Glad they are back

Well put, Esrati. Grandstanding…and bringing to our attention the story of a decent businessman with the potential of offering back to the community a bit of that which was lost and loved is caught in the cross-hairs of inattentiveness and lack of direction by the City of Dayton. The story won’t change while we have these bozos in office. That said I wish this business all the best!

I’d crowdfund “ESRATI ON A BOBCAT” in a heartbeat, even though we all know you just want easy-access fried chicken.

I hope that Quincy’s is successful in their new location – in spite of all of the roadblocks put up by the inept city. I’ve had their fish and it’s good stuff so I’m sure they’ll have great chicken.

In the meantime, if you’re craving some Chicken Louie’s – go to the Subby’s in Miamisburg. They also have the rights to the Chicken Louie’s recipes and they make some doggone good chicken!! Best bet is to call ahead and place your order or you’ll be waiting a while… or getting the chicken that’s been sitting a while.

Was the chicken fried, or was it more of a broasted chicken?

Oh, you guys are killin’ me! LOL

With broasted chicken, I think there’s less potential for greasiness. But I have eaten some excellent fried chicken, too, with not a trace of excess grease.

Now, baked chicken can be quite good as long as it’s not too dry.

Sautéed with butter, garlic and wine…..now that is hard to beat.

Of course, barbequed chicken is an excellent way to go. As long as the sauce isn’t too sweet.

Diced with a tempura batter, fried in really hot oil……yeah!

Now I know what I’m missing by not being on FaceBook. Obviously, not a hell of a lot!!

After posting my above comment about the chicken a few days ago I started jonesin’ for some Chicken Louies. Headed into the ‘burg and brought home 8 pieces. GOOD STUFF! Even the reheated leftovers were tasty!

At last, somebody that wants to discuss chicken!

I worked out near the VA in the early 80s and loved Lou’s Broaster Hut on W. Third, and then frequented Chicken Louie’s on N. Main in the early 90s. If Quincy’s is anywhere as close to good I have to give it a try. And Dave C., I beg to differ but there’s nothing wrong with a sweet BBQ sauce once in a while. (Sorry to be so rude and risk starting a flame war, but it had to be said.)

Facebook sucks. It’s just a value to blow off your every unfiltered thought. Spend a couple bucks, do a blog like Esrati. Write about real subjects not trolling. I certainly don’t agree with David Esrati all the time but on the subject of better local government I’m glad he’s around pumping it out. I’ll disagree when I disagree and cheer him on when he’s right on but Facebook is joke. It’s an abomination to our society at it’s worst and nothing but a “have to” advertising tool at best (IMO).

@Ralph: “every unfiltered thought” is a wonderful insight.

Part of the maturation process is to eventually understand that not every thought that that one has is worth sharing. Or worth anything.

As an entrepreneur myself, I appreciate any topics that bring to light hurdles that many starting a new company faces.  Unfortunately it’s not easy to do small business in Dayton- and to be fair other large municipalities too.