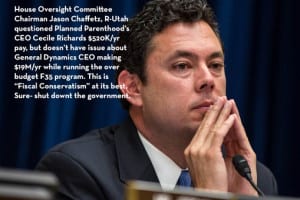 I thought to myself of the companies that have federal contracts, GSA schedules- who promise to do work for the people of the United States at the lowest cost possible. Companies like General Dynamics- who are so far over budget on the F35 program– and yet, keep getting funded. The CEO of General Dynamics, Phebe N. Novakovic, who also happens to be a woman- made $19 million last year. No inquisition there.

From the only news source that carried this in depth- Al Jazeera, read the exchange:

“Your compensation in 2009 was $353,000. Is that correct?” House Oversight Committee Chairman Jason Chaffetz, R-Utah, began. “Congratulations, it was,” Chaffetz continued when Richards said she didn’t have the exact figures. He went on to note that Richards’ salary had risen to $520,000 since then…

“I would like to register my opposition and objection to the chairman beating up on a woman, on our witness today for making a good salary,” said Carolyn Maloney, D-N.Y. “In the entire time I’ve been in Congress, I’ve never seen a witness beaten up and questioned about their salary… I find it discriminatory and inappropriate.”…

Rep. Elijah Cummings, D-Md., ranking member of the committee, said in a fiery rebuttal that it was particularly hypocritical for Republicans to place Planned Parenthood under a microscope and take Richards to task over her salary when they had never taken an interest in the hefty compensations of executives at big banks, drug companies and defense contractors, who had all engaged in law-breaking.

“Last month, Lockheed Martin was fined millions of dollars for using taxpayer funds to lobby Congress to maintain its hold on a multi-billion dollar Pentagon contract. Lockheed’s CEO received a stunning $33 million last year,” Cummings railed.  “Ms. Richards, do you know if there has been any investigation or any effort  — any — to eliminate Lockheed’s federal funding?”

“You got it, of course there wasn’t!” Cummings said. “These are huge companies that are actually guilty of breaking the law and their CEOs make millions of dollars — Republicans never criticize the salaries of their CEOs or they never try to strip their federal funding, their government subsidies or their tax breaks.”

Source: House GOP ‘beats up’ on Planned Parenthood president — and her salary

If Congress really cared about reeling in government spending- why not put a simple cap on executive salary for any company that receives significant income from the government. Any medical organization accepting funding for medicare/medicaid, a cap. Any defense contractor- a cap. Any bank that is guaranteed by the federal reserve- and has the ability to create money- a cap. Any company where employees depend on federal programs to make ends meet- a cap.

What the cap should be isn’t something random- set by the boards of directors- but based on a ratio of the total payroll of U.S. employees. You want to make more- don’t do business with the people of the United States- or accept our assistance.

Obviously, if the pay of the CEO of Planned Parenthood is relevant to the cost to our country of a government shutdown- this is important stuff.

He supplements his income selling body parts – that’s all he has to tell congress.