No this isn’t a post about a British girl band. It’s an overdue review/recommendation of the little Chinese restaurant, Ginger and Spice,  that opened on Brown Street back in January.

It’s squeezed in between Subway and Hot Head Burritos- in the little strip built by JZ Properties- when we already thought we had enough choices. It has had a bunch of places go in and close. Tropical smoothie, DQ/Orange Julius, etc. When I saw it was going to have an Asian place I was wondering how they were going to fit it all in. The answer: tightly. 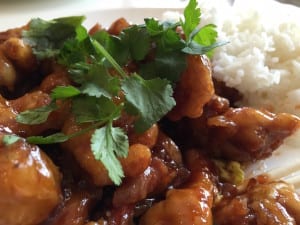 Beijing Pork from Ginger and Spice

The food is wonderful. The Beijing Pork, the first time I had it- was one of the best Chinese dishes I’d ever had- unfortunately, it’s never been quite the same- but- still good. Their menu description: 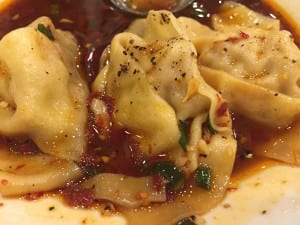 Another favorite is the Ginger & Spice Wontons – which have a bit of a kick – again their description:

They say they source a lot of their ingredients locally- and try to stay with organic/gmo/hormone-free sources. It may be part of the reason they’ve had two one dollar price increases since they opened. At one point, I had an email with a list of their local providers, but I can’t find it now. Their website doesn’t list them.

The other reason may be because the place is crammed at meal times. With less than 3 dozen seats crammed into a tiny space, this isn’t the place to go to have a private conversation- although it will be intimate, you’ll be cheek to cheek with the next table. The best thing that could happen to them would be for Subway to close- and they expand their dining room- or- outdoor tables in the summer.

The operation works like a fast casual place. You walk up to the counter- place your order, get your drinks (water glasses and a big ice-filled water dispenser are next to the cash register- the cups are small- which sucks- because coming back to get more means tripping over the table next to you) and pay- getting a number on a tall holder. They bring out the food. But, despite the portions being large enough to split- they don’t give you two plates. You have to ask- and even then- it slows things down- because they really don’t have people waiting on you- although sometimes, they come and refill water glasses or check on you- again – sometimes.

Eating there is the better value. The take out portions are always smaller than the eat in. Considerably. This is kind of too bad, since sometimes, getting a table is difficult. They do have a “communal table” and a “bar” of seats right in front of the door- but this also means the blast of cold air in the winter, since there was no space wasted on a portico or double doors.

There is a different menu in Chinese. It has stuff that you might consider daring. I’ve not been that brave, but I’ve seen the dishes- and judging by the Chinese UD kids who are always in there- this is the real deal Chinese food.

Most of the time- one appetizer and one entree will fill two people up. Cost under $20.

They do sell beer. They take credit cards. The place is always spotless, and bright and well lit, and busy. Plenty of parking around back. They are open Monday – Saturday 11am to 9pm, and closed on Sundays. The proper address is 1105 Brown Street, but you shouldn’t have a hard time finding it.

Choosing between Ginger and Spice and CJ Chan on Wilmington is a challenge. CJ Chan wins on comfort and service- as well as a wider menu including sushi. They are also open on Sunday.  Ginger and Spice is a bit cheaper all day long- their menu doesn’t change prices or portions lunch to dinner, and the food always feels light and fresh. Between the two- I don’t need to go too far for excellent Asian fare.

If you haven’t been- go. It’s an experience if nothing else.