It was nice to be introduced at the Trotwood Democratic Club meeting with a “David, Welcome back to Trotwood.” No other candidate got that introduction. I spent a lot of time in Trotwood around 2004 working with the community to try to revitalize the Salem Mall. We started a business group called Savisco (I wish I remember what it stood for right now) and I got to know a lot of the community. I worked with the council and Mike Lucking who was then the economic development director and is now the city manager. The commission has had a few changes, but what is neat about Trotwood is that the people who were on the commission are still active in the community. It is a really welcoming community and they are especially proud of their Rams, who won the state championship in football this year with an undefeated record.

That being said, the Trotwood club is a pretty hard-core Democratic party group. The questions were simple: why are you running and what makes you a viable candidate. Five minutes each, and then some Q and A afterwards. The video may not be as great- since they didn’t really have a podium, and I had to keep the camera back to make sure I could get the room. We went in alphabetical order.

Next up was Olivia Freeman- who won’t share her “strategy for taking Mike Turner down” because “she sees cameras and it will end up on the Internet.” She brought her flyers for the first time as well, I scanned one in and have it posted for you. New line is that she also was a substitute teacher in Trotwood at one time.

Tom McMasters has been having some awkward pauses, esp. when he has to go off script. You’ll see some in this video. Tom is running because he’s looking for “Good governance” which means paying our debt.

Sharen Neuhardt sticks to her script, you’ll always hear her bio and about her farm. I’ve always loved candidates who talk about where they were born as if they had any choice in the matter. She seems to think that the new district is her key to being able to win against Turner- not her positions or her ideas. Considering Steve Austria wouldn’t even venture to take on Mike Turner, nor would any other long-time elected politician, the district isn’t the main hurdle here. She also believes that she knows how to win because of her first failure- which sounds a lot like what Jane Mitakides said when she went out for her second spanking. I think it’s most telling that she’s been hiring a staff and talking to people in Washington for her campaign- instead of trying to talk to the people of the Ohio tenth district. If you can find one iota of a campaign platform in her 7 minutes, you’ve done better than me. She still has no handouts at all.

Ryan Steele may be naive, but he is refreshing to listen to. His line about Congress classifying pizza as a vegetable got a great laugh. I’m happy that he brings this energy to the campaign trail.

Mack Van Allen wasn’t there, but had someone deliver his flyers.

Representative Roland Winburn of the newly gerrymandered 40th district was there. State School board member Jeffery Mims also came out. At one point one of the club members, a hard-core party member, asked about the screening committee and if we weren’t endorsed would we drop out. This is usually the first question in the screening room- and one that I find very offensive, but in this case it was more embarrassing- because it clearly showed how politically illiterate some members are- we’re all on the ballot already and voting has begun. He must have known that, because he told everyone he’d already voted and not many had. How he could have known who he was voting for must have been a game of eeny, meeny, miny moe- since there has been almost zero coverage of this race. 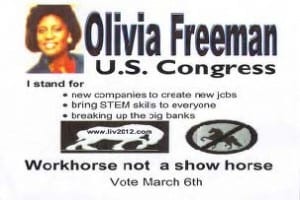