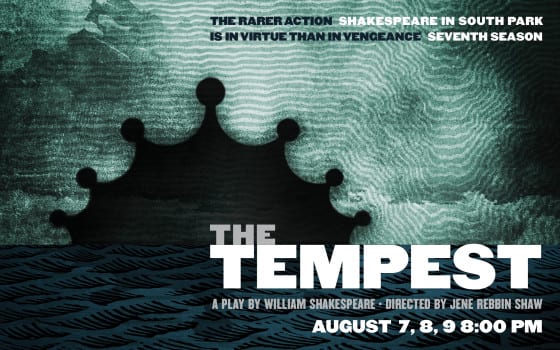 Seventh season starts tonight, Aug. 7, and runs through Sunday Aug 9. Who would have thought that a neighborhood could start a Free Shakespeare program and keep it going for that long?

Welcome to my neighborhood. Historic South Park is a neighborhood that works together to make living in Dayton a unique and wonderful experience. We have progressive Porch, Patio and Deck Parties that progress from house to house in the summer, we play social soccer on Sundays, we have doggie flash mobs, food truck Shindigs, our own urban gardens where people plant their crops in raised beds, hot toddy parties, a Halloween weenie roast and a pre-trick or treat parade complete with a marching band, an Easter egg hunt, and I’m probably only half done.

For Shakespeare they take Willy’s work, and usually modernize the setting- yet keep the original words. At least half the cast lives in the ‘hood, and neighbors build the sets, do the costumes, run the sound and lights and ask for donations at the end (so the show can go on).

It starts at 8 p.m. each night- bring a blanket or lawn chair. Park in Hope Lutheran Church’s parking lot at 500 Hickory or at Emerson School just a smidgen farther down Hickory. The show is on “South Park Green” at 601 Hickory- or there about.

If you like theater, this is a good time. Come on out and see how South Park does things differently.

The Tempest is a play by William Shakespeare, believed to have been written in 1610–11, and thought by many critics to be the last play that Shakespeare wrote alone. It is set on a remote island, where Prospero, the rightful Duke of Milan, plots to restore his daughter Miranda to her rightful place using illusion and skilful manipulation. He conjures up a storm, the eponymous tempest, to lure his usurping brother Antonio and the complicit King Alonso of Naples to the island. There, his machinations bring  about the revelation of Antonio’s lowly nature, the redemption of the king, and the marriage of Miranda to Alonso’s son, Ferdinand.

File this under have cheap fun in Dayton.