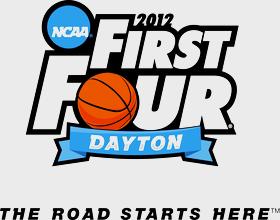 Logo for the First Four 2012 festival

A cryptic email came out today about the cancellation of the big party in the Oregon District for the NCAA first four that kicks off March Madness.

Oregon business owners / property owners and interested parties of the Oregon District:
Regarding the First Four Festival:
The Local Organizing Committee has been working with the NCAA to produce events in the region surrounding First Four and Selection Sunday.  The NCAA is not allowing local sponsorships for public events (like the First Four Festival) which has impacted the LOC’s plans for the First Four Festival this year.   The Local Organizing Committee has reached an agreement with the NCAA to not have a First Four Festival this year.The NCAA team is primarily an all-new group, different from the folks that were involved from NCAA last year; however, the LOC is committed to working with them for next year’s Festival.
Just a reminder however…Dayton has an entire week of basketball for First Four, 2nd and 3rd rounds this year.  And, the arena has been sold out for the First Four which strengthens Dayton’s ability to secure the games beyond 2015 (we have them through 2014).  This year, there will be 4 days of games, 16 teams, 10 nationally televised games from UD Arena and an entire week to showcase Dayton to visitors.
I know that you, like the rest of us, are disappointed there won’t be a First Four Festival this year, but we are working on some other events in Oregon that will promote our businesses to visitors and Dayton citizens alike. Stay tuned for more information on these activities!  If you have any additional questions, please contact JP Nauseef, First Four LOC Chairman.

JP Nauseef, was the former CEO of the Dayton Development Coalition before being eased out after the public found out they had hired Congressman Turner’s wife to do a campaign on a no-bid contract. Since then, he’s been busy working in his own consulting firm that seems to have the backing of the Mathile Family.
While it’s unclear exactly how much was spent on this party last year- and by whom, the same cast of characters were involved, with the graphics and advertising handled by Real Art (they were subcontracted for much of Ms. Turner’s “Get Midwest” campaign). I did have the opportunity to meet with some graduating UD seniors around May- and they said that that this party was the first time they’d ever been to the Oregon District.
Was there a bid package published for the job of “Local Organizing Committee” last year? It might be interesting to do a little digging on this.
The good news is that the basketball tournament is still coming to town, and that tickets are already sold out.
If you enjoyed this post, make sure you subscribe to my RSS feed! If you wish to support this blog and independent journalism in Dayton, consider donating. All of the effort that goes into writing posts and creating videos comes directly out of my pocket, so any amount helps!
Subscribe
3 Comments
Inline Feedbacks
View all comments

A reporter from Channel 7 called me about this post last night at 7:46 pm- wanted to know my sources and how to contact Mike Martin. Then the folks at the DDN got busy- and wrote this:

of course, they got a quote from Nan, who LOVES to talk to the media- about anything and everything.

Hours after I posted. Of course, no credit given to esrati.com for breaking the story.

This story confirms a former DDN employee’s description of the paper. “If it’s news, it’s news to us.”
Nice scoop.

See, I say fuck the NCAA and their tournament. Who the hell are they to tell the City what it can and cannot do, especially when it has to do all this shyte for them? I noticed the comments on the DDN article reflected the same feeling. My favorite wondering what Nauseef’s day job is, because it obviously doesn’t involve knowing how to negotiate. (Insert several personal insults here)