A late addition to the new business of today’s Dayton Public Schools Board of Education meeting agenda- a first reading of change in policies of disclosure.

One can only wonder if this is because of Federal law- or because Dr. Baguirov was routinely not abstaining- but actively participating in contracts that could be potential conflicts of interest. Both the CareSource deal- which may pose a conflict since he’s an owner of a Home Health firm- and the bus deal, where he owns a trucking company and does business with the firms that the Board buys from- were very questionable. 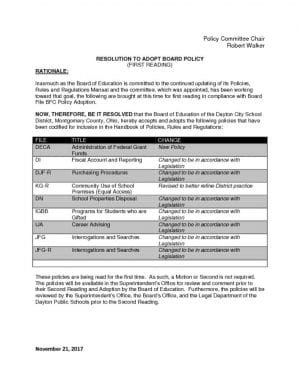 DPS board gets official all of a sudden- as they exit.

From the new policy- note there is an odd either or option for procurement, but the second clause states:

There may also be a Mark Baker clause- in the addition of policy on use of school buildings:

“2. No building is used for commercial or personal gain.”

There were reports that Mr. Baker was using building in the summer for private basketball tutoring, and when questioned, the district would not release relevant security footage proving the allegations, or show the building use request forms that Mr. Baker would have had to turn in.

Also included is policy on searches of students and interrogations by law enforcement. That this is coming up now, as old board members depart- for new board members to vote on, without proper community discussion is evidence of a bigger issue: why now?

The rules are particularly vague when pertaining to electronic devices – being cell phones or school issued computers:

The following rules apply to the search of school property assigned to a student (locker, desk, etc.) and the seizure of items in his/her possession.

There is also a section on strip searches:

Strip searches should be discouraged. A substantially higher degree of certainty (more than a reasonable belief) is required prior to conducting such a search. In cases in which school officials believe a strip search is necessary, law enforcement officials should be called to conduct the search.

Note- all of these rules, seem to be dancing around the fact that students, as minors, can not, and should not, be expected to know their rights, yet some of these searches could lead to criminal charges.

If I was a parent of a DPS student, I’d be incredibly cautious of allowing these rules to take effect without demanding that a legal advocate be present for the student before any of these searches take place.

What’s more concerting is that these are being proposed AFTER it was rumored that Dayton Police, acting on behalf of Children’s Services were in a high school to collect DNA samples from football players to determine if any of them are baby daddies to a staff member.

If there is a subject that should be discussed with the community in public open forum, this is it.

Instead, it seems to be trying to slide under the radar during regime change.

I highly advise you to read the whole document.

And one last thing. Although Board Docs has improved. without properly labeling this document with the actual issues contained in it- with a summary, adding a ADA compliant PDF isn’t enough to meet ADA requirements. Labeling it 1st Reading with the date- gives no insight to what it contains. This is why the entire public information system needs a revamp, if it is to be compliant for public records.