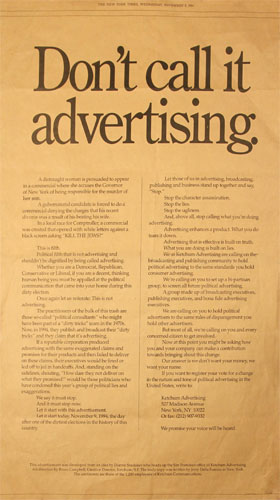 It’s been hanging over my desk since my mother cut it out of the New York Times on Nov. 9, 1994, and sent it to me. A full page ad, placed by the folks at Ketchum Advertising who’d had enough of the filth that was being run by politicians on TV and on radio.

It was written by Jerry Della Femina, the guy who created the ultimate lying spokesperson, Joe Isuzu. He’s a  legend in the business, giving us the classic book on advertising, “From those wonderful folks who brought you Pearl Harbor.” Here is the copy from the ad- which we shot as best we could- and turned into a PDF- I didn’t find it anywhere else on the internet:

A distraught woman is persuaded to appear in a commercial where she accuses the Governor of New York of being responsible for the murder of her son.
A gubernatorial candidate is forced to do a commercial denying the charges that his recent divorce was a result of his beating his wife.
In a local race for Comptroller, a commercial was created that opened with white letters against a black screen asking “KILL THE JEWS?”

Political filth that is not advertising and shouldn’t be dignified by being called advertising.

Whether you are a Democrat, Republican, Conservative or Liberal, if you are a decent, thinking human being you must be appalled at the political communication that came into your home during this dirty election.

Once again let us reiterate: This is not advertising. the practitioners of the bulk of this trash are those so-called “political consultants” who might have been part of a “dirty tricks” team in the 1970s. Now, in 1994, they publish and broadcast their “dirty tricks” and they claim that it’s advertising.

If a reputable corporation produced advertising with the same exaggerated claims and promises for their products and then failed to deliver on these claims, their executives would be fined or led off to jail in handcuffs. And, standing on the sidelines, shouting, “How dare they not deliver on what they promised!” would be those politicians who have condoned this year’s group of political lies and exaggerations.

Let it start today, November 9, 1994, the day after one of the dirtiest elections in the history of this country.

Let those of us in advertising, broadcasting, publishing and business stand up together and say, “Stop.”

Stop the character assassination.
Stop the lies.
Stop the ugliness.
And, above all, stop calling what you’re doing advertising.

Advertising enhances a product.
What you do tears it down.

But most of all, we’re calling on you and every concerned citizen to get involved. Now at this point you might be asking how you and your company can make a contribution towards bringing about this change.

Our answer is we don’t want your money, we want your name. If you want to register your vote for a change in the nature and tone of political advertising in the United States, write to:

We promise your voice will be heard.

This advertisement was developed from an idea by Dianne Snedaker who heads up the San Francisco office of Ketchum Advertising.

The sentiments are those of the 1,200 employees of Ketchum Communications.

With the Koch brothers pouring money into the election in Wisconsin and the SuperPACs spending millions on destroying the Republican presidential candidates before Obama even gets started, the words of this ad are even more relevant today than when they were published.

We’ve all seen the suggestion that our congressmen all wear NASCAR-style jumpsuits with the logos of their sponsors, but, even that’s not enough. It’s time to start holding them 100% accountable – and not just with the “I’m Joe Isuzu and I approve this message”- but to actually fine them for anything found false or deceptive in their ads, and if it’s flagrant enough, boot them from office.

There is one ad that I really like that you might not have seen- but I think it sums up how all of us feel about these negative attack ads, it’s for John Hickenlooper who ran for Governor of Colorado and won:

There is a terrific column in today’s New York Times that shows what Jerry Della Femina was talking about.
Click on http://opinionator.blogs.nytimes.com/2012/01/26/deconstructing-a-demagogue/?hp

[…] I spoke of the ad done in 1994 by one of our industries greats, Jerry Della Femina, who wrote a full page New York Times ad “Don’t call it advertising.” I asked that if a candidate comes to them with a request to do a “I was born in […]