Usually, I stand up and make a speech telling the party that endorsing in primary elections is wrong. But, last night I was at the Fairgrounds to Future meeting during the party executive committee meeting.

I’ll have more on that song and dance in a later post.

Then, as I raced over to make the central committee meeting (why we have 2 meetings is beyond me) all I could think about was talking to Dennis Kucinich about my Dad. They were friends going back to when Dennis was a copy boy (yes- that was the job title) at the Plain Dealer in the sixties where my Dad was a copy editor. I had a copy of the obituary I wrote for my father printed out. 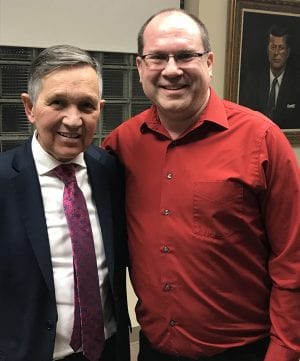 Dennis Kucinich, man of the people and a friend of my father. David Esrati (center) JFK (framed in the background right)

As I stood outside Mark Owen’s office- while Dennis was being interviewed about the closing of Good Sam, I remember my dad telling me about how Dennis had stood up for the people of Cleveland when he reversed the deal to sell the public utility, Muny Light to the Cleveland Electric Illuminating Company (CEI)  a private company. I was around 16. I had heard about Dennis through the media- where he was called the “Boy Mayor” because of both his youth- and his resemblance  to Alfred E. Newman- from Mad Magazine. The city was being punished by being forced into bankruptcy. Dad said Dennis had done the right thing, fighting the establishment that wanted to steal from the people and privatize a public service. He explained how all this worked, and said Dennis was the man for the people.

Unlike our local party elite- I’m glad Dennis is battling Richard Cordray in a primary- although I think Rich is a really good guy too- and we don’t lose if either of them become governor, I’m going with Dennis because he’s been fighting these fights- and putting his own life on the line (there were death threats against him in Cleveland through all that turmoil) and started fighting for the people when Cordray was still in diapers.

When Dennis was done with the cameras, I said, “this might be really short, my name is David Esrati” to Dennis- he said, “Last name?” and was looking at me intently, “Esrati”- he said immediately “Steve’s son? Is he still with us” and I told him know- and handed him the obit. He started gushing about how smart my dad was, and how he had such an interesting history. It meant the world to me.

After Dennis spoke, I went back and asked to take a photo with him, mostly to show Mom and see if it would trigger any memories. She didn’t recognize Dennis, but once I started telling her who it was- it seemed to come back. She remembered her husband, and what a special man he was, just as Dennis had said.

And, shame on the Montgomery County Democratic Party for continuing to endorse in primaries.

one favor Youtube just changed its monetization strategy, and while I have over 400 hours watched, I need 1000 subscribers (I have 139 as of this writing). If you want to continue to see videos at events, analysis, news stories, etc in video format, you can help by subscribing. It doesn’t cost anything, and it helps with the costs of producing them. Go to https://www.youtube.com/c/electesrati and hit subscribe please.

Re your statement of “he reversed the deal to sell the public utility- the Cleveland Electric Illuminating Company (CEI) to a private company. ”
IIRC, wasn’t the public utility known as or nick named “Muny Light”?
The Illuminating Company(aka CEI) was the main company in the rest of the county and was a private coompany.
And didn’t he try to block the sake of “Muny Light” to CEI?
https://en.m.wikipedia.org/wiki/Cleveland_Public_Power

Funny, REO Speedwagon was at Hobart recently and a Hockey friend asked me to go. They were never good. Then or now. Dennis is an acquired taste- smart people like him…