Zombie flicks seem to be all the rage these days. The un-dead coming to make us dead. That’s no help for Devonta Marquise Rayford, who died on June 13, and won’t have an 18th birthday. He was allegedly shot by a 17-year-old, whose name was published in the paper, Isaiah J. Coleman. Rayford went to Stivers, Coleman to Ponitz, neither, according to sources come from what would be considered disadvantaged homes. It’s almost as if we’ve got sport killing going on, and in my view, it’s our fault.

Within a mile of my home in South Park are three facilities that were built for kids, that are now something else.

Closest is the old YWCA on Hickory Street across from Emerson School/Dayton Christian Middle School/Emerson Academy. It’s not been a YMCA since I moved to the neighborhood in 1986. It had a huge gymnasium, a kitchen, craft rooms, a large multipurpose space and virtually zero parking. It was built for kids to get to, and to play in. Supposedly, it was given to the neighborhood in 1971 by Virginia Kettering. It was where I first attended neighborhood meetings until it was sold off to a succession of failing social service type food pantries that never opened up the place to kids. It hasn’t had a tenant for at least 4 years and sits and rots. 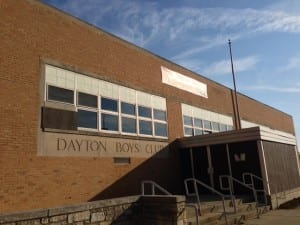 Dayton Boys club about to become yet another Charter School

In the strangest place to build a facility for kids, like the former Dayton Boys and Girls Club. It sits in the arms of a high-speed highway access ramp to US 35. It had an indoor pool, gyms and activity spaces. It’s now getting retrofitted to be another charter school, the Dayton Smart School which is supposed to be a bilingual school (however the website isn’t bilingual, so who knows). The landscapers were hard at work restoring order to a parking lot and grounds that had started to give in to entropy. The Boys and Girls Club vacated it about 10 years ago, and did the same to the West Side location a few years ago.

Bomberger Center across from Stivers was a city rec facility which was specifically turned into a “Teen Center” when Commissioner Idotha “Bootsie” Neal was a commissioner. It had an outdoor pool, and is graced by a beautiful park that has one of the city’s few semi-functional soccer fields (We have one with one goal in Burns Jackson park, just behind Emerson Academy next to US 35, it’s never had a net in the goal frame). Bomberger was sold off to become the Ahiska Turkish American Community Center. You can read about how our city decided to wholesale sell off buildings we built for the community in this post: Dayton can’t make up mind: buy or sell property. You will see a long list of rec centers that have been closed on that list.

I know people want to swim at Bomberger, because I get searches for “will Bomberger pool be open” – and sadly, the answer is no. 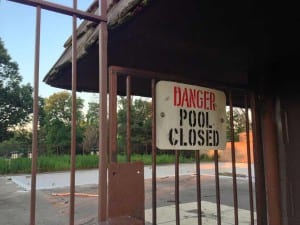 Same goes for the Five Oaks pool- which sits gathering weeds. I remember sitting in commission meetings listening to the debate on if this pool should be outdoors or indoors, or have a retractable roof (like Kettering’s main pool).

While the city claims that the cost of running these pools was outside the budget, they’ve gone on a shopping spree buying empty buildings with no declared public use and selling off valuable property for a song without opening up for bids. Or this post which shows how much real estate we’ve “invested our tax dollars in”

For the last two summers, my small business has been a job site for Montgomery County Youth Works- a summer jobs program for teens. Last year, the kids were paid minimum wage for a maximum of 15 hours, but this year, they got more federal dollars and it’s 20 hours. They’ve had a hard time finding enough businesses willing to take kids on. Part of the problem is cities used to hire these kids to be lifeguards at the pools we’ve closed, so instead, I’ve got two kids learning how to be in the advertising business- both from Ponitz.

Which brings me back to dead kids in Dayton. When you don’t give them nets to shoot for, pools to swim in, or jobs to grow in, they end up in prison or 6 feet under. We can blame video games, we can blame the ease of getting guns, we can blame the war on drugs, but, maybe, if those three buildings near me were doing what they were built for, Devonta Marquise Rayford wouldn’t be dead and Isaiah Coleman wouldn’t be headed to prison- which, by the way, costs taxpayers a lot more than running a basketball camp or opening a swimming pool.

I’m David Esrati, and I promise, that when you elect me to the Dayton City Commission, you will have one voice on the city commission that believes that parks and recreation are economic development and that our kids deserve better. Being part of the Gun Report in the New York Times each week isn’t the kind of marketing we should be doing.

If you enjoyed reading true breaking news, instead of broken news from the major media in Dayton, make sure you subscribe to this site for an email every time I post. If you wish to support this blog and independent journalism in Dayton, consider donating. All of the effort that goes into writing posts and creating videos comes directly out of my pocket, so any amount helps! Please also subscribe to the Youtube channel for notifications of every video we launch – including the livestreams.
Subscribe
11 Comments
Inline Feedbacks
View all comments

Hm.  I  grew up in a neighborhood where kids died from gun violence.  My high school had 355 in my freshman class and 155 in my graduating class.  I never participated in summer programs, teen enters, or enjoyed public swimming pools.  Somehow I maaged to earn a PhD and to have a decent professional career.  I wonder how all that happened in the absence of such public programs?  It was, granted, a different time–but fundamentally different?

@truddick just because you didn’t participate in any of those things- doesn’t mean they don’t serve a vital part of many peoples lives.

“The difference between what we do and what we are capable of doing would suffice to solve most of the world’s problems.”
? Mahatma Gandhii

You have the House of Sizer’s vote.

It is not my fault that Dayton’s 17-year olds choose to resolve their petty teenage differences with deadly force.
A basketball net or a soccer goal isn’t going to change that ghetto mindset.
Perhaps the DPS should provide mandatory conflict resolution classes for its students to teach them that there are better ways to settle an argument than to shoot a person dead. Unless, of course, ruining your life is the ultimate goal.

” that ghetto mindset” is a direct result of:

1. Economic inequality
2. The continued over policing of minority neighborhoods in the fruitless War on Drugs, leading to our proud claim to most imprisoned country on Earth, of which minorities are disproportionately represented (a continued Jim Crow, with the upper-classes using the boogeyman of “drugs” to subjugate, control, and Balkanize the black population – an age old method of control).
3. Uppity-ass people who think they are above others. Acting ghetto is a great way to get under the skin of uppity-ass people and have a fun time for free.
4. The mass disinvestment in our inner cities (see David’s post about nothing for kids). You’d be hostile to society if you were provided with a last-rate education, while forces of profit cannibalized your neighborhood while agents of the state (our police and associated bureaucrats) treated your neighborhoods like a war zone to be controlled by military like occupation. It’s not normal to be cheery and happy and polite while you watch everything fall down around you.
5. Feel free to add you own…

Oh, OK. I gotcha. If I feel hostile to society, it’s OK to resolve my petty teenager differences with deadly force. Thanks for clearing that up for me.

@ Diane: I have no idea what you are talking about. I was merely addressing the causes of “that ghetto mindset”, you wrote of.

@ Diane: I wasn’t even talking about guns. I was merely addressing “that ghetto mindset” you wrote about, in order to help clarify and increase understanding.

My family swam at a big wooded Lutheran church camp lake when I was growing up. No blacks, and it was awesome. Rope swing, fishing, canoeing, inner tubes, floating deck, lazy creeks, camping. Our city pools in Indianapolis are the same as everywhere else, it seems. The lifeguards used to be all white, thin and tanned healthy teens, but now they are mostly obese blacks who play hip-hop and rap music at the pools and loiter around. BAD IDEA! If you get there before 2PM, there are no blacks because the water is still cold. All of the young white mothers with small children enjoy the pool early, and when the miscreants from the low-income summer camps start showing up, mostly unsupervised, of course, the mothers and babies all have to leave because of the atrocious behavior. The water gets hot and foamy, and the whistles blow constantly. Blacks splash, spew filthy language, dunk each other, piss in the pool, ride on each other’s backs, steal pool chairs from other people, horseplay, and try to pull each other’s clothing off. I have seen more that one obese 10 year old girl in a translucent sagging adult swim suit and a shower cap and it is not a pretty sight! The boys all have sugar tits and huge bellies and it just makes me sick. They always arrive in packs of 20 kids and one adult, it seems. $2 bucks per head, not such a bargain anymore. Of course, Indianapolis just spent over 2 million dollars fixing up the public pools for the blacks. I paid for that. I recommend more whites do SWPL stuff – camping, fishing, hiking, lake swimming, tubing, and boating. These activities teach kids fundamentals and are easy on the family budget. I have decided that I am taking my family out into nature more this year, even it if costs me a little more in time and money. This city living is getting on my nerves.

people are a product of there inviroment… i dont know what that has to do with corn rolls or callin each other the n word. and it sounds like to mean latinos actin black! or black ghetto more corretly. everyone cant walk around with perfect diction a crew cut and a cardingon actin……saburban well buffy i feel daddy was correct in his assumption that i would need the bmw for the weekend. i would just die if i had to drive the miada. is ghetto somethin so bad to be if that is what u r. dropped out of high school slaggin ( cause u cant find a half way cool job) got 3 kids on your own since 15 but havent ben ta jail keepin your nose clean and treat people good and go to church from time to time. but is all that ghetto or just life. booshey folks !