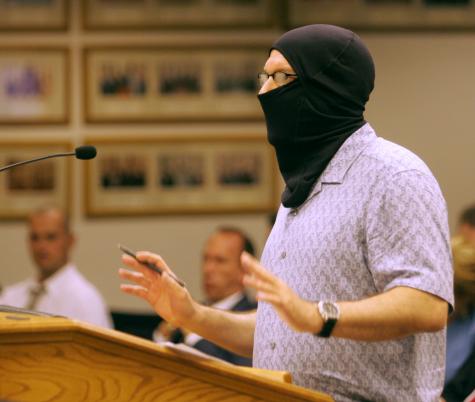 City Commission critic dons mask to protest speaking rules
DAYTON: Wearing a Ninja-type mask to address the Dayton City Commission on Wednesday night didn’t have the same shock value for local activist David Esrati that it did in 1996.

Eleven years ago, he was placed under arrested for refusing to take off the hood.

The charge against him in 1996 was dismissed.

“To remind you how important citizen participation is, I thought I would bring this back out,” Esrati told the commissioners Wednesday, referring to the mask.

“Any restriction on citizen participation is a mistake.”

Esrati had hoped to address the commission two weeks ago regarding a proposed Kroger development at Wayne Avenue and Wyoming Street, but he submitted the request to speak after the business meeting started.

That’s against the rules of how the commission runs its meetings.

City Manager Rashad Young said Esrati has the right to wear whatever he wants to address the commission, as long as it is not offensive.

Please note: The 4 charges against me were dismissed in 1999 after 2.5 years of court battles. The city lost all 5 cases. Not what the DDN reported as a “Charge”- and the settlement was $100,000-a majority of it going to lawyers.

The hood- is technically called a “Balaclava” and is not really quite the same as what Ninjas wear- but, “Ninja” or “Terrorist” always sounds better- if I had been a Muslim woman- wearing a Burka, no one would have batted an eye.

The point is- if the Commission doesn’t want to hear or see the face of the public- for whom they work, maybe they should consider another line of work.

If you enjoyed this post, make sure you subscribe to my RSS feed! If you wish to support this blog and independent journalism in Dayton, consider donating. All of the effort that goes into writing posts and creating videos comes directly out of my pocket, so any amount helps!
Subscribe
19 Comments
Inline Feedbacks
View all comments

But after seeing the “Esrati Show” on the 11 o’clock news last night, I wonder if you’re more about truly making a point or more about self-promotion. I would venture a guess that your dissapointment level would have been pretty high if the DDN or Local TV stations wouldn’t have given your protest any coverage.

Like I said, I personally support anyone that fights for Dayton. People like you are an asset to our city as you strive to make things better.

But as far as your bid for the city commision….. Probably good that it didn’t work out. A big black hood on a city commisioner is even slightly more rediculous than the pair of one-circle, one-square glasses that our Mayor wears each week. “Political extremist” and “face of the City” are two things that really don’t go together. So keep fighting for Dayton, but maybe just a little less crazy-like….. Just my opinion.

And if I hadn’t worn the hood- there would have been no coverage.
If you realize that the last time I ran the vote breakdown was exactly $1 a vote- with Dean spending $12K, Bootsie $10K and me at $6K.
I’ve been writing ideas here for 3 years- everyone in City Hall- and the DDN read it- but none of them join in.
It’s an earned attention media playing field out there- for those of us that can’t buy our way into the media.
Realistically- get over the mask. It’s the message.

Okay, but don’t ask me to get over the shirt. Sheesh, coordination! ;-)

Clearly the photo shows David has a weapon in his right hand. I think he is attempting a coup d’etat of sorts. The shirt is a distraction to the commission while he implements his green beret attack. He is playing within the rules, however, by keeping track of his three minutes with his watch, which is on his left arm and also is a distraction to Our Leaders.

With about 20 seconds left to speak, Mr. Esrati realizes that he can not attempt such an attack because his glasses have fogged up, most likely because he has been complaining too much…………….

…………Or he is conducting band practice trying to look like an Iraqi woman. At least this is what I gather from the photo.

Don’t worry. The shirt wasn’t as hideous as it looks. It actually a lot less lavender. There’s no excuse for the print, though.

But it’s still better than the bright orange jumpsuit he got to wear last time.

how funny that others picked up on the outfit! i thought it was just me…looks kind of like pajamas….you know i DO teach people how to dress…;)

Michael, For The Love Of Dayton

You truly are Dayton’s resident guerrilla warrior! I support your actions even though they seem pretty silly. But I understand it takes extravagant and over the top actions to grab the larger population’s and the news’ attention. It worked for that meeting, will it last in the long-run?

Michael- I don’t consider the right to speak to our government “silly”- in fact, it’s something that I was willing to put on a uniform and die for.
Somewhere along the line- most of you, seem to have forgotten that the idea of democracy is “For the people, by the people” and have let those you elect run along and do whatever they damn well want.
Being elected used to be a mark of respect- now, we have a country run by thieves, liars and hypocrites. A lot of voters are disenfranchised, and the gap in our country between the haves and the have nots is reaching epic proportions.
Laugh, mock, criticize all your want- but, if you don’t start questioning “authority”- soon those rights will all be gone.
What good are citizen comments if they can’t address the very issues of the meeting?
What good is a protest of one man- if no one hears it?
Even a person “outraged” by the commissions actions- bailed on me- and chose not to speak on this subject.
Frankly- while some of you jest- I’d expect the readers of this site to be the first to understand this properly- and I’m a little disappointed that you still don’t seem to get it.

We all understand, and we all “get it.” I just think some of the readers believe a person can go about a protest without a mask. I don’t care about the mask anymore, I see how it has brought attention to an otherwise uneventful protest that happens around the United States daily. BTW, politicians have always been corrupt.

You bring up an interest point in regards to a person being “outraged.” Why are liberals “outraged” over every subject? I understand passion, but being outraged needs to be saved for really important things – the commission WILL let you speak, under guidelines, which every other commission in the free world has chosen to implement in their meetings. Be on time, and it would not be a problem. But to be outraged is a waste of energy on a subject that could have been avoided by leaving 7 minutes earlier.

Gene- you still don’t get it- if you have to decide before the meeting if you want to speak-
then you have to be able to see the future- to know if there is something that may come up that you want to speak about.
And- lets not forget- the commission wastes a ton of time on things that have no bearing on local government- do we have to sit through that as well?

I do get it, but it is not an open forum, you knew this before you went, didn’t you? Ask for a change, I know they wont do it, but the mask thing just takes away the credibility you have, just ask your close friends. I personally don’t care that you wore a mask, but others really do think your a little crazy, therefore less credible.

Gene- this is an open forum- with decorum.
Crazy are the ones that dream to think outside the limits of what is accepted.
The Wright brothers were crazy, Einstein was crazy, I’d rather be crazy than brain dead- but “Credible” like our current crop of leaders.

Now you are reading to it and through it…….. You are, thank God, not brain dead, nor crazy. No one can grant you “crazy status” yet. I actually agree with a lot you say and do, but because we are not friends you think you are better than me. At this point, I think you should wear the mask in public, daily.

BTW, another line of work for your city pals would involve begging and drug dealing. Maybe you should run for office again, if you want real change. Even I would give you money.

I don’t know where “you go, girl” fits into this- but- I used to have that Shaw quote on my campaign lit.

I realize this thread is done and gone, but I figure you get copies of this in email, so…

To help out with the problems with these city meetings, do you think having it documented on film might make it easier? Borrow a video camera from DATV and record the meetings, see if DATV will put it on public access at a set time every week for responsible citizens to watch and keep an eye on the local government (kinda like CSPAN, I guess), and then also take cuts of the more important sections and put them on YouTube / Google Video which then all of the local Dayton blogs can link to?

Plus it would inspire me to get that DATV training a whole lot more quickly, if this whole idea didn’t seem like a waste of time.

Zac, they are already recorded and broadcast on DATV.
I don’t know if they have them on YouTube yet-
The DATV training is well worth it though.
Thanks!

Okay, cool! Nice to know it’s already on DATV. (checks DATV website). Gotcha, on Saturday at 3pm and Thursday at 12am, 11am and 8pm.

Sorry about the idiotic comment; I’ve lived here in Dayton now for almost two years and am still having a hard time finding good sources for *real* local information, past what I could read between the lines in DDN. I only just ran across your blog a few days ago, which is the first real source of information I’m finding for someone looking to learn more about Dayton itself.

Unfortunately all of my friends here had also moved to Dayton from elsewhere, so none of us has the local connection for getting involved. Luckily I ran across Drexel Dave’s website (realdaytonohio.blogspot.com) and he’s had craploads of information to springboard off from, including your blog which has been immensely helpful.

Thank you so much for running this blog and for your activism as a whole! And thank you especially for your patience in regards to my idiotic comment.