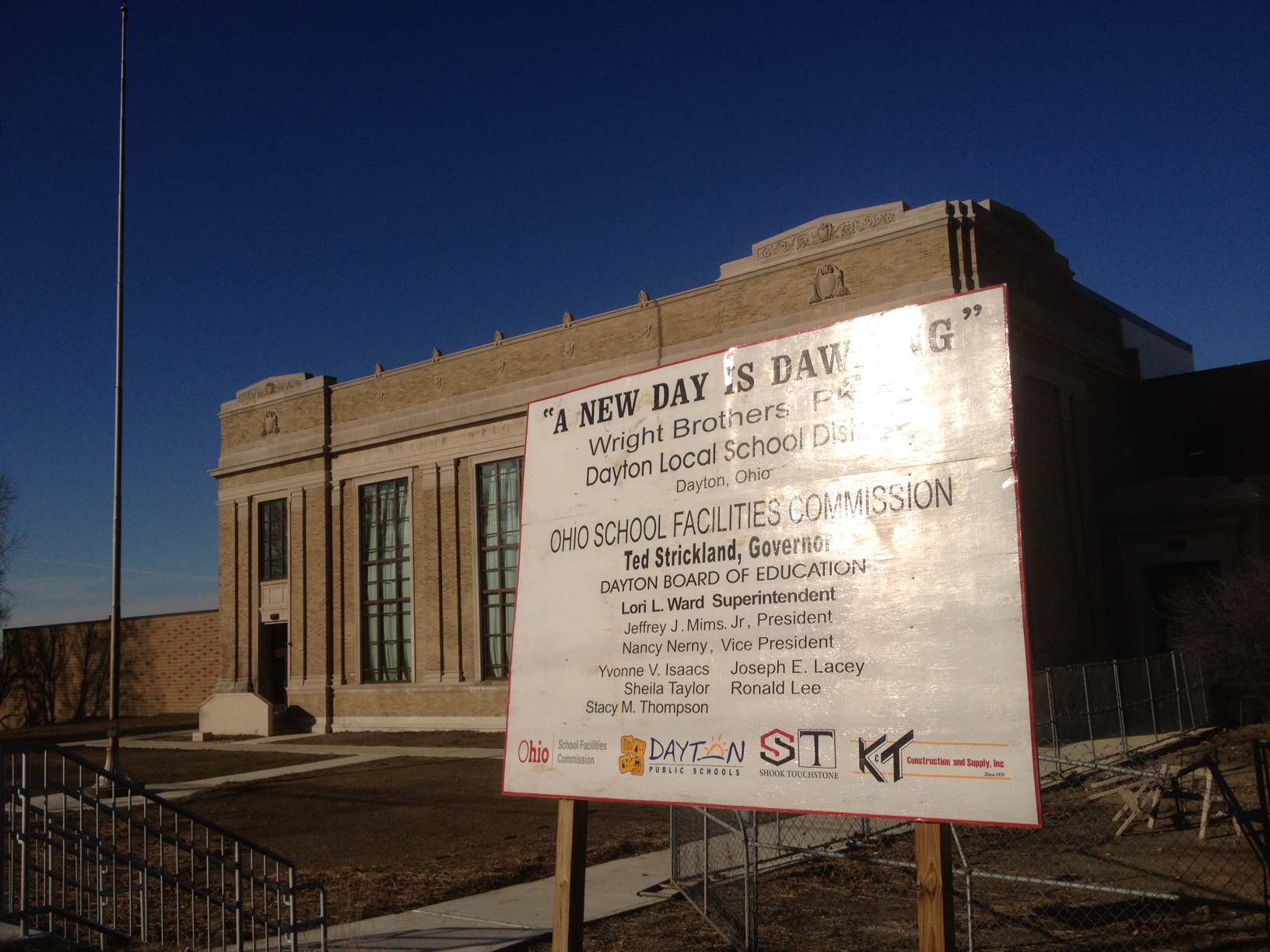 When I grew up in Cleveland Heights, we had elementary schools from k-6, junior high for 7-9 and high school from 10-12. To me, that was the way it was. It was a little odd that 9th grade counted as high school but you weren’t at the high school, but that’s the way it was. As I was finishing elementary school in a building from the twenties, they were building a new elementary school in the parking lot next door and were closing off the street the school was named for to have enough room to build the new modern “open” building. From the day it was built, teachers have struggled with noise from the open plan, where classrooms didn’t have walls to the ceilings or a door. Progress.

Luckily, Dayton Public Schools didn’t fall for the open floor plan in their 28 new buildings, but they did structure the buildings originally for PK-8 and 9-12. Of course, it wasn’t totally consistent, with Stivers being a 7-12 building, but close enough (note it’s the only school that we kept the old building and just added new wings).

Since the de-seg order, almost all DPS kids were bused, so “load balancing” of kids to the school was relatively simple- just drive the kids to the right building, no need for placing schools where the school age population is. As we’ve learned in the attempt to switch back to “neighborhood schools” shifting populations makes for difficult allocation of kids to schools- add in a steadily fluctuating enrollment in charter schools and things get very complex.

To make matters worse, thanks to annexations and strange map-drawing skills, Dayton looks more like an octopus than what most cities look like. Throw in bold geographical and man made dividers like rivers and interstates, it makes getting kids to schools a major undertaking- never mind what you have to do with kids once you get them into the buildings. 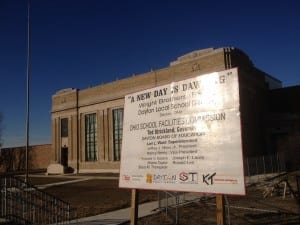 A few old parts were saved, like Wright Brothers Auditorium

When the state offered the 2/3 financing of new buildings and voters passed the levy for the new buildings (a bonanza for the construction industry) money was allocated based on enrollments at the very beginning of the charter movement when virtually anybody could open up a school and start getting $5k per kid, per year, while teaching in a building that didn’t have to meet any of the same standards required for the public schools. When many of these failed, their students bounced back to DPS causing a new crunch on space. Unfortunately, to keep the demolition companies happy (also major donors to politicians) we agreed to demolish all of our old buildings. I’ve been watching the very slow progress as Patterson-Kennedy is destroyed- a building built better than any of the new buildings. These could have served as over-flow and load balancers in some cases, but it’s too late for that.

Despite the fact that Harvard is able to teach in 250 –old buildings and Cambridge in 600 year-old buildings, taxpayers were told that public school education couldn’t be done in our existing old buildings- while charters managed to do just fine in the same old buildings (Emerson Academy is at the end of my street and seems to be performing above DPS averages in a building from the 1920s and Richard Allen Academies are also doing well in the old United Way building on Salem). Even UD has managed to sell a high-dollar educational experience in old buildings, imaging that.

It now seems that educators in Dayton are having second thoughts about not having middle schools. Unfortunately, we don’t have buildings to spare or necessarily in the right places, so we’re considering expanding the high achools to 7-12 with Belmont coming online now, others may follow. There is no chance of building anything new- and of course, we were in a huge rush to tear down the former Julienne which might have served well as a central junior high, albeit a large one.

None of this is easy logistically. Unfortunately, the best solution might be to work collaboratively with some of the charters that have extra space in their buildings, however that’s almost like asking for a Hatfield/McCoy marriage.

As a neighborhood-focused community activist, what I find most disconcerting about the whole gerrymandering of kids and schools by market forces is that our neighborhood children have an incredibly hard time getting to know each other well- with most neighborhoods having kids in 5-10 different schools. East End Community Services has worked incredibly hard at connecting their neighborhood with Ruskin School (a rare instance of a charter coming back into the DPS system) and creating a true “community school.” To me, this is the major downfall of deseg. busing and our public/charter school configuration: kids don’t know their neighbors.

Cleveland Heights had true neighborhood schools. Of my friends from high school (with a graduating class of about 850) the people I’m still most connected to as I turn 50 are the ones who went to elementary school with me. We had between 80 and 100 kids in my grade and so I’m extrapolating that there were 8 elementary schools in the district (they’d actually closed a few due to declining population when I was in grade school). Kids in Dayton aren’t getting that shared experience that I had- and that’s a shame. Somehow, we need to figure out how to reconfigure our neighborhoods so that despite kids going to so many different schools, we can at least give them a stable connected community to build their long-term relationships that have meant so much to me.

As I drove past the former Boys and Girls Club at Keowee and the U.S.-35 off ramp (the strangest place to put a kids’ facility I think I’ve ever seen) I noticed that the building was for sale and it looked like the charter school had left. I then drove down Hickory Street past the old YWCA which was given to the neighborhood by Virginia Kettering in 1971 and stopped being a Y or a neighborhood facility sometime before 1986 when I moved into South Park. The city also just closed and sold off the Bomberger Teen Center and has cut the number of neighborhood Recreation centers down. How are we supposed to give our kids what we took for granted? How can we compete with the seemingly stable districts in our suburbs like Kettering, Oakwood or Beavercreek?

I have a vision for bringing  our neighborhoods back to being neighborhoods, the problem is I’m finding mostly deaf ears. I’d love to hear your thoughts on this.

Full disclosure: My company, The Next Wave has done some work for DPS, this post doesn’t contain any proprietary knowledge or information and wasn’t written on behalf of the district or with its permission or oversight.

I favor a 3-3-3-3 plan: grades 1-3, 4-6, 7-9, and 10-12.  Keeps kids in contact with those near their own age, which reduces issues such as bullying.  Doesn’t have to be done in separate buildings so long as you can physically subdivide existing spaces.

In the earlier grades, each student should follow the same curriculum (adjusted for ability: special needs, normal, and advanced).  Those curricula should be offered at all schools, so there’s no reason to enroll a student anywhere but at the closest building.  That eliminates a lot of transportation expense (and more could be eliminated if we excused DPS from transporting students to charter schools–which they currently must provide at DPS expense).  High schools, on the other hand, benefit from offering specialized programs–and so high schoolers ought to be able to choose from among all that Dayton offers.  That means busing the high school students and not the elementary–the opposite of what Dayton currently does.

Comparing Dayton’s old buildings to those at private, flush-with-cash universities–or even local charter schools–is unfair.  Some of Dayton’s buildings were honestly unusable–did you ever observe lunch at Patterson-Kennedy?  Moreover, decades of neglect to maintain had rendered some of those buildings just about irreparable.

I am a 41 year old African American woman. I grew up in Dayton all my life and lived in the same house with both of my parents and my sister. I graduated in 1988. I went to Jefferson Elementary for Kindergarten and I then went to Fairview Elementary (via bus) for 1,2 and for some strange reason when you got to 3rd grade you went to E.J. Brown down the street and then for 4th grade we came back to Fairview where I was supposed to stay until 8th grade, because back then Fairview and all the schools were K-8th grade. I remember well because the upper floor was where the “big” kids were and we so could not wait to be in the 8th grade (woopee) It was kind of known, when you get to 3rd grade you go down to E.J. Brown. Then DPS realized they had made a mistake. They thought I lived in the block up the street, so I was supposed to be going to Cornell (which was 4 blocks away)/Meadowdale. So let me explain. I lived 2 houses “in to” my side of the block, there was a cross street and the same street continued for another 2 blocks up.  So I knew the kids on my block and played with them (something that rarely happens these days), but I went to school with the students up the street. So in 5th grade, I went to Meadowdale, then in 6th grade we switched and came to Cornell. I didn’t understand it, but later I did. My side of town was black, Meadowdale area was white. Then in 7th-9th grade, we rode a bus cross town again to intergrate with the other white side of town at Kiser. 10th-12th grade Colonel White. Whew! My point. I’m not sure what the benefit was. I did meet one white girl and we became friends, even spent the night over her house, but she lost some friends because she was a N-lover. Yes, that came out of her 5th grade friends mouth. (I know, we had our… Read more »

DB- thanks for the comment- welcome to Esrati.com
Unfortunately, you were treated like a pawn in a political game- instead of as a human being by the powers that be.

If we look back to see the fall of Dayton- it coincided with this game of “integration” which resulted in economic segregation being the outcome instead of fixing the problems.

Yes, Dayton is still divided- and our leadership has done little to bring us together in a meaningful way. If we can at least get the neighborhoods to interact and the kids to feel a sense of belonging- we may have a chance at changing perceptions of our community.