A Statement from the Dayton Police Department

The Dayton Police Department was made aware today of a social media post by one of our officers regarding the victim of a kidnapping case we are currently investigating.

On July 7, 2019, the Dayton Police Department responded to a suspicious person call in the area of Hilary Avenue and Eleanor Avenue. The initial on-scene investigation indicated that Kwasi Casey had been kidnapped by unknown assailants. A detective call out was initiated based upon this information, and the Dayton Homicide Squad responded. In the early hours of this investigation detectives worked tirelessly, along with members of Mr. Casey’s family, to locate Mr. Casey. These efforts were augmented by the Federal Bureau of Investigation, who dispatched Special Agents pursuant to our request for assistance.

As a result of a lengthy investigation, several persons of interest were interviewed about Mr. Casey’s disappearance and two were arrested on unrelated charges. The Dayton Homicide Squad put countless hours of work into not only trying to find Mr. Casey, but also trying to find those responsible for his disappearance. These efforts included interviews, multiple search warrants as well as multiple searches of structures and areas following up on tips provided by the public. Additional investigation focuses on finding evidence and additional people who may have been involved.

Mr. Casey’s remains were recently located and identified. It is our mission to bring the person or persons who harmed Mr. Casey to justice.

The core values of the Dayton Police Department are Professionalism, Integrity, Fairness, and Respect. The social media comment that was made by an officer, who has been on extended leave since May 2019, does not reflect the values of this department, nor does it reflect how we handle any kidnapping or violent crime case. If someone is kidnapped, it is a priority to find them. If someone has been the victim of a violent crime, it is a priority to find the perpetrators.

An administrative investigation is being initiated into the social media post in question and the officer who authored it. We ask for your patience as this process is completed. 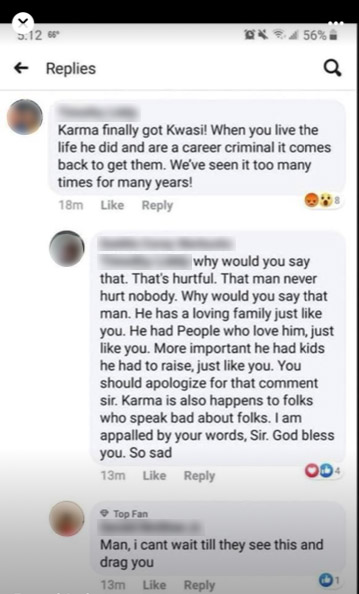 The post that made it to me, may or may not be the full extent of the conversation. I am posting it with names and identities blurred because this isn’t verifiable, but I believe the public should know. That the DPD didn’t release the statement on an official open site- like their own (or I just couldn’t find it) is an issue. Facebook is only available to FB members.
Statements like this, about citizens who’ve been murdered, aren’t appropriate for anyone with a badge to make.

Oct 13, 2019- other screen shots have been provided, and while they may or may not have a connection to why the officer is on extended leave. The officer was involved in a shooting of someone who was involved in an encounter with the officer and his partner. They claimed the suspect attempted to grab the officers gun, a jury didn’t agree and set the person free. The officer posted photos of the person and said things to the effect of he didn’t feel safe sleeping as long as this person wasn’t in custody. Any more details would reveal the officers name and the person who was found innocent’s name. While police may legally kill people in the line of duty, it is inappropriate for them to try to serve as judge and jury- after a judge and jury have made a decision. These other posts may be more indicative of a serious problem with this officer’s training and understanding of the law.

Oct 14 2019 The Dayton Daily news is reporting the same thing as this blog– and naming the officer. Only issue, according to my sources, the officer is not on administrative leave, so questions about the initial statement by the DPD on FB should be questioned.

Ok… why was the officer suspended? You should be outraged David, this is right up your alley of freedom of speech. Whatever biehl does to this officer will be overturned by an arbitrator. Biehl is just bowing to pressure and being the political ass kisser that he is. All he his doing is positioning himself to run against Whaley after he retires He needs the west side love. Shame he has to buy the love one cop at a time. Biehl is a scumbag.

@tears for kwasi, I’m not sure why the officer was on admin leave- but, I’ve updated the post with additional info- but, because I don’t have access to records- I’m working as best I can with what I have.
I believe the citizens are due a better explanation of what is going on with this officer- and will not let up on this story.