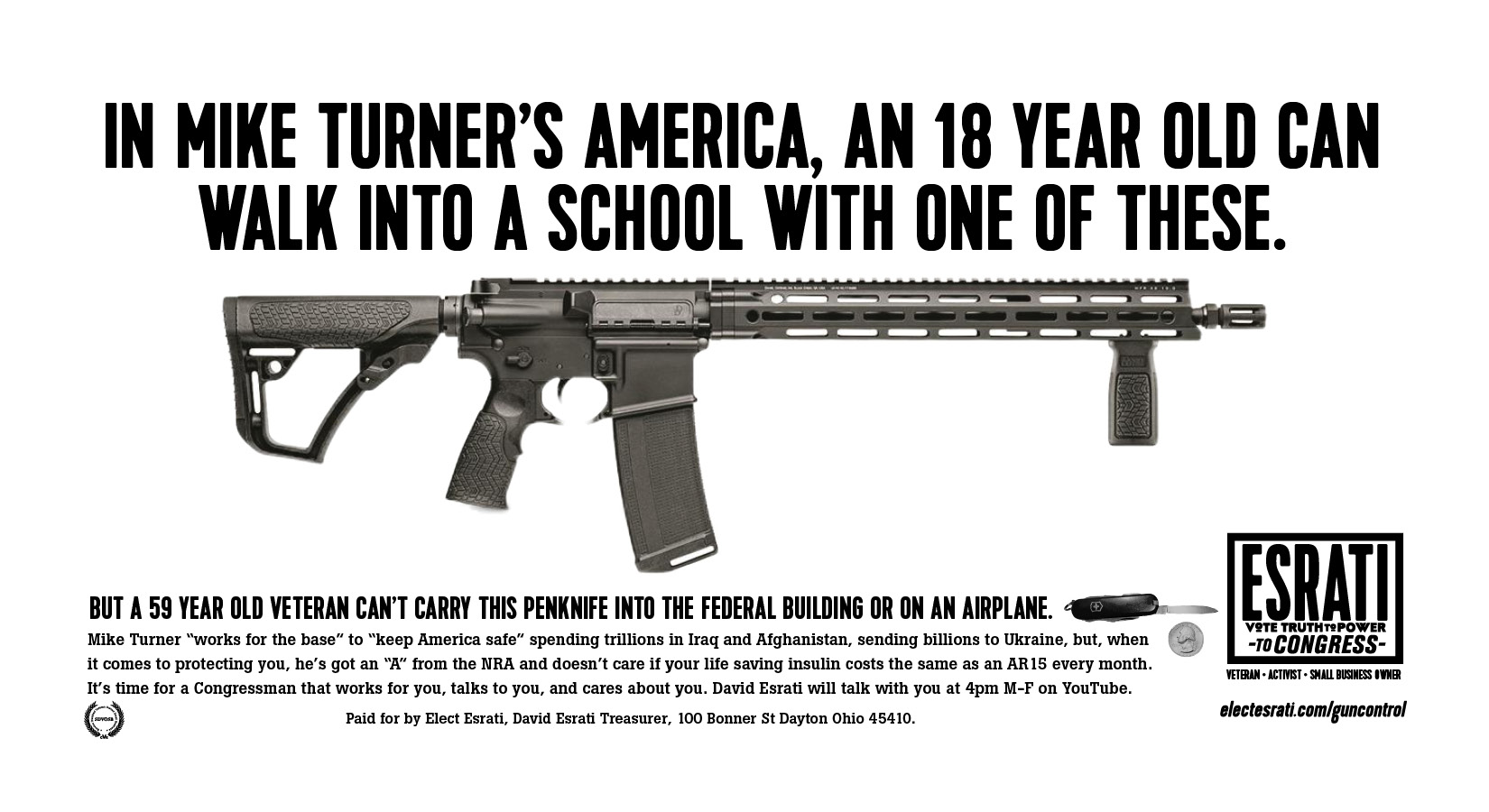 Dayton, Ohio – David Esrati, Democratic Congressional Candidate for Ohio’s 10th District, has proposed legislation to utilize the equal protections clause of the 14th Amendment of the United States Constitution to remove gun bans from Federal buildings and Government facilities, including airports, unless the bans are equally applied to all public spaces. Dubbed the “Equal Protection from Gun Violence Act,” the law is intended to pressure legislatures to take action in response to recent mass shootings by stripping government officials of special protections.

“If the right to bear arms is absolute, there can be no exceptions or un-equal protection for the people in power,” Esrati stated on his campaign website. “They should feel just as safe as we, the general public do, when at school, the supermarket, at a concert, at a movie theater, in a nightclub, etc.”

In the same announcement, Esrati, an advertising executive, called for a media equivalent of “Truth in Advertising laws” which he calls “Truth in Violence laws,” proposing legislation to require depictions of gun violence in movies, television, and video games to be portrayed as realistically as possible. It will also require a disclaimer in the credits detailing the associated medical, legal, incarceration, and funeral costs associated with gun violence depicted in entertainment media.

And while “thoughts and prayers” have been a standard Republican response, any half-stepping responses of “improved background checks,” new restrictions on purchases by adults under 21, red flag laws, and calls to arm teachers, Esrati, a veteran, believes all weapons of modern war, including semi-automatic pistols, should be available only to those in a “well-regulated militia” requiring the equivalent training that he received in the military. Weapons would be stored in armories that are guarded around the clock; members would complete monthly training, which would always include being in uniform; and at least two members of the militia would be required to team together during any training. Ammunition would be limited to 20 rounds per militia member. Each militia would bear all responsibility for any acts of violence committed with their installation’s stored weapons and must carry liability insurance. Any violations would result in all members being stood down for a period of one year.

“Of course, there are nuances that must be discussed before this law is passed; however, the criteria of following the ideas of constitutional gun ownership will still be in effect. No one is taking away your rights to be part of a ‘well-regulated militia’ or having the right to ‘bear arms’ – we’re just stopping the proliferation of ‘guns for everyone, everywhere.’”

Esrati would prefer to remain focused on ideas to help small businesses, such as a free national payroll service and an option for small businesses to opt into Medicare Coverage for their employees.

“Abortion and gun control are ‘hot button issues’ for single-issue voters, but at some point, we have to decide which children we’re failing, because active shooter drills and ‘good guys with guns’ didn’t protect the children of Uvalde, or Sandy Hook, or Stoneman Douglas or…”

Esrati ran the ad at the top of his Gun Control page www.electesrati.com/guncontrol in the Dayton Daily News on Sunday, June 12, 2022.

His opponent, Republican Mike Turner, a 10-term incumbent, has an “A” rating by the NRA. He has an “A” rating from the NRA Political Victory Fund: https://justfacts.votesmart.org/candidate/evaluations/45519/mike-turner

If you want to support this candidate, please consider making a donation www.electesrati.com/donate

You are completely full of crap. I’m not worried since Mike will squash you. Hopefully in a very public and humiliating way.

In my opinion, gun violence is over-reported, while all other episodes are under-reported. The issue is not guns, but a decay and decline in the moral fabric of our citizens.

What a total IGNORANT “solution” for gun control: 2nd Amendment has NOTHING to do with “military service,” it allows PRIVATE CITIZENS the right to OWN and BEAR arms ie the INHERENT right of SELF-defense…un-infringed. I was unaware that you were a Constitutional scholar, I guess you are more adroit with the Bill of Rights than some Supreme Court justices are (sarcasm).
Government: It MURDERED over 250 million people in the last century, but feel free to lecture me about owning firearms.