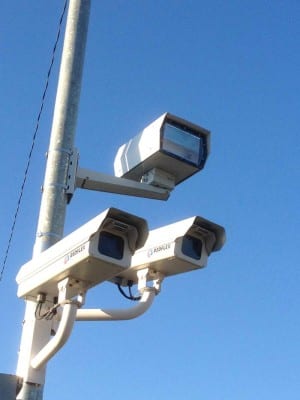 March 23, 5PM A Lucas county judge ruled in favor of Home rule, and the City will continue using the cameras and ticketing until this winds through the courts.

,  (correction, March 23rd) the city of Dayton lost one of its crutches- the use of red light and speeding cameras to extort owners of vehicles for the misdeeds of individual drivers.

The cameras, supplied by a private company, Redflex, were a “partnership” where a private company made unlimited amounts of money from this questionable impingement on personal freedoms. Had the city bought the cameras outright, like they do most pieces of law enforcement equipment, this deal may not have reeked so badly, but in the ultimate act of brilliance, your leaders chose a questionable deal. Much like private prisons, where the incentives are to keep people locked up – because more convicts mean more money, the cameras were continuously questioned for their accuracy and the timing of lights suspect as contributors to this scam.

The sad thing is, the cameras worked. Speeds dropped, accidents declined, in the areas where the cameras were in place.

The real question is why people came to drive like idiots in the city of Dayton and other places where the cameras were deployed? No one speeds in Oakwood, and Kettering still has a rap for traffic enforcement. These communities run traffic tickets as a way to show their police departments are out watching and waiting for crime to happen- versus Dayton, where all they do is chase the tail having to go out reactively  all day long.

Maybe if our leaders would spend more of that “economic development” cash they hand out like candy to their political supporters and scam artists promising jobs- and just did the job they were supposed to do- ensuring our safety, the cameras wouldn’t have been a last resort. In the 29 years I’ve lived in Dayton, I’ve watched the police department drop in staffing by at least a third. Of course, the size of our city hasn’t gotten any smaller geographically- but, we’ve also seen almost a quarter of our population vote with their feet to move to other parts of Montgomery County where they feel safer.

In all the time the cameras have been installed in Dayton, I’ve never gotten a ticket so this hasn’t affected me directly, but, I did get one in Kettering- for a supposed right turn on red at Dorothy Lane and Wilmington. The difference being- one was handed out by a cop, who said he saw me do it. And while I know so many of you are happy about the end of the cameras- in my one ticket, I would have preferred the camera- because I would have had proof that I did the crime.

Hopefully, Dayton police will learn to write tickets again, because, well- that’s their job. Don’t be surprised if you get one and costs you more, because real police work costs more than a robot cop camera. If Redflex goes out of business, I won’t be crying. They made ungodly money out of their monopoly deal on cameras. The question is, how long the city leaders will leave the cameras and signs up- even if the cameras are now impotent.

Sometimes just the idea that we’re being watched, makes us behave differently.

The problem with the cameras is not that they are owned by a private companies. The problem is that they largely eliminate due process. There is no opportunity for discovery, to cross examine or to call witnesses.

The illegal cameras so loved by Nanny Whale and the commissioners that I didn’t vote for aren’t going anywhere soon. Dayton along with Columbus, Springfield, and probably everywhere else are going to appeals. “Forget the populous. To hell with the citizens. Let them eat cake.”

I hope people remember who they voted for next time but unfortunately the list of candidates to replace Lovelace appear for the most part to be status quo.

I have never understood why people are getting their panties in a twist over the red light cameras. I got an $80 ticket from one when I didn’t come to a complete stop while making a right turn on red at Troy and Stanley a few years back. Honestly, I didn’t realize I hadn’t come to a complete stop that day, but there was no question I earned the ticket. When it came in the mail, on it was printed a link to a short online video that clearly showed me in my car sailing through the red light. Very good resolution, clear license plate, you could see my car moving and that the light was red at the time. What more can people ask? What kind of proof do you need that you broke the law and should pay the fine?

Looks like the cameras are staying on, at least for now…

My opinion on the use of SAFETY CAMERAS.
http://daytonmayor.blogspot.com/2015/03/speed-or-safety.html

What is the status of tickets still owed under this system?

Well if you, I, and we, all the people are being watched does this mean that when the citizens disagree or protest their government with moral or unethical practices the government can claim that we all need watching to control the people how they want us to behave.

This is not a free society when you can be influenced by being watched by a camera or a drone as you are being watched so you will not behave or disagree with anything (even new laws that are questionable) the government does to it’s citizens. Remember when Dayton was on the map for using drones to watch what people are doing outside or even inside on your own private property as a test pilot program using us as guinea pigs which is a true invasion of privacy. They will claim safety and security as an excuse to do these acts against the citizens. They will find other surveillance to modify behavior in more ways imaginable. The citizens long ago could of voted or recalled these individuals that destroy the constitution. Welcome to the police state!

Diane:
Do you recall whether the photo was taken from your auto’s rear or front end? Most, if not all, of these cameras are rigged to shoot the auto’s rear end image so as to make it appear that the motorist was running a red light when in fact the light was yellow when these motorists proceeded. Another trick used by these companies is to shorten the duration of the yellow light –> same effect/photo op. These 2 alterations are usually employed together so the citizen gets the dirt end of the stick and the city is enriched w/your bucks. Don’t be so quick to assume you were guilty. Unless you can recall with 100% accuracy that you ran through the red light on that date & time, then you are innocent until proven guilty. The fact that the photos bypass DUE PROCESS and help stuff the coffers of the local yahoos is in part why these types of tickets are becoming outlawed.

I could see your point if the proof were just a still photo, but the ticket also provides a link to an online video showing the moving car, the rear license plate, the driver and the color of the light. Pretty irrefutable if you ask me.

Safety camera speeding tickets are harder to swallow, I suppose, because neither a photo nor a video accurately documents how fast you were going at the time of the alleged violation. It comes down to the driver’s word vs. the camera’s sensor.

Thank you for your thoughtful response. The fact that it is a video does not change the implications of my prior posting, particularly since it was rear of the vehicle that was filmed (w/still image saved on ticket). These companies purposely film from that position as it changes the vantage point, putting vehicles right in the middle of an intersection, appearing to be running a red light, when in fact the light was yellow upon approach. This is well known in legal circles where the legality of these cameras has been challenged in city commission-type meetings.