Yep, that was me last night at Masquerage. 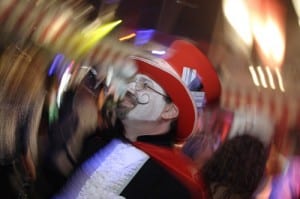 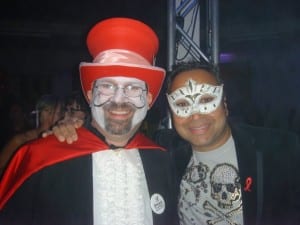 Thanks to my friend Betty Lemke for going into her secret vault of the Mad Hatter costume shop to help me out. Thanks to my amazing gf for all her hard work on the event- both with the PR and social media strategy, but the countless meetings, and the last minute signs for the silent auction.

Thanks to everyone who came and partied with ARC Ohio for the cause. And especially thanks to Tommy Nealeigh and the Freakshow Deluxe for thrills, chills and never seen before acts of derring-do and never-want-to-do entertainment.

And, I can’t forget to mention my friends and neighbors, Josh Stucky and Brent Johnson for their part in the Rubi Girls, who’ve been a part of Masquerage from the start. Not only is it a blast watching you- it’s been a blast watching you grow your Square One Salon into one of the classic examples of a Dayton Original. Never mind that Brent looks better in a dress than 95% of the women that were there last night :-)

When Dayton wants to throw a party, and make you think you aren’t in Dayton- we can party with the best of them.

For at least a few hours, I wasn’t thinking about the loss of NCR, GM, Iams- being outspent by the political machine, or having my integrity or intelligence questioned by the Dayton Daily News. For that, ARC Ohio, I’m deeply thankful. And- for your work to combat AIDS in our community, I am in awe. To the hundreds of volunteers who worked so hard to pull this one fantastic event off, you did it with amazing style and grace.

It’s your kind of spirit of community giving that makes Dayton better than NYC, Chicago or LA- any day, because it’s from the heart, not just the wallet.

I understand I’m a long shot to win this election, but, win or lose, I’m still just David- a resident of South Park, a citizen of Dayton and a human being on the planet earth. I wish that I could cure AIDS, bring peace to the Middle East and clean water to everyone- but, I, like you- am only human. Last night, I wore a mask, and helped a cause. It’s not my first time- but at least last night, I had at least 700 people doing it with me.

We thank you for your support.  My partner is a client of ARC Ohio so we are direct beneficiarys of the services they provide.

ARC supports all of us. It’s a great organization- and they throw an awesome party.

It was great!  I had a great time!  Wonderful entertainment!