Readers of Esrati.com have seen plenty of articles about the incredible arrogance and bad decision making of Dr. Libby Lolli at Dayton Public Schools. Now, we get to see how her husband, Gene Lolli, the retire/rehire superintendent at Fairborn is just as reckless. 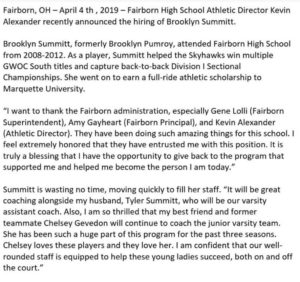 In this mornings Dayton Daily news, the story of Fairborn hiring a former player as head coach caught my eye, because she would be replacing Jim Cole, the former Dunbar Women’s Basketball coach who wasn’t retained by Libby Lolli’s hire of Shauna Welch as Athletic Director. Her choice for replacing Cole, Antoine Sain, did the same thing Libby has done at DPS- taken DPS lower with a 14-8 compared to former coach Cole’s 16-8.

The article unveiled the sad story of Brooklyn Pumroy, who went to Marquette, met Tyler Summitt, the assistant coach, who was married, and apparently started having an affair with her. Summitt, is the son of the legendary womens basketball coach at Tennessee, Pat Summitt, who died months after her son disgraced her. Pumroy followed him to Louisiana Tech University- got pregnant by him, and then married him:

Brooklyn Summitt is a former Skyhawk – then Brooklyn Pumroy – and played for Tyler Summitt while he was the head women’s basketball coach at Louisiana Tech University.

Tyler Summitt resigned as the head coach from Tech in 2016. In his resignation he told the News Star of Monroe, La., “I am profoundly disappointed in myself for engaging in a relationship that has negatively affected the people I love, respect and care about the most.”

I immediately sent the article to my friend Nancy Hogshead-Makar, CEO of Champion Women, an organization dedicated to equality in sport for women athletes and a defender for sexual abuse by coaches of athletes. When I called her for follow up, she was already aware and disgusted that anyone would allow Tyler Summitt to be in a position to coach. “If you were a lawyer and did that, you’d be disbarred, a teacher and you’d be in jail” was her reaction. She said it had already bought national scorn to Fairborn starting immediately after the press release was issued Friday by Fairborn and then taken down. The comments on the Champion Women Facebook page were cutting:

The Fairborn Ohio A.D., superintendent, and board of education demonstrated exceptional poor judgment in offering a position to Summitt. His affair with his current wife (then a player) made national headlines as disgraceful conduct. The school administrators will now bring national attention to their own poor judgment.

Summitt has certainly turned out to be a major disappointment in the game of life. As a coach, he had an inappropriate relationship with a player and resigned/fired. He even had a poor coaching record. His wife divorced him. He started an MBA after leaving LA Tech but I read he dropped out and is involved with a program about Pat Summitt. He is living off the money and prestige of his mother. Now he got a job coaching because of his wife. There is something terribly wrong with this sequence of events.

Steve Gietschier: If I were the parent of a player on that team, I would be outraged.

The Miami Valley has seen its share of teachers and coaches being fired for inappropriate relationships with students, how Fairborn can hire someone who has already proven himself to break the inviolable rule of coaching is beyond belief.

The NCAA has guidelines against relationships between players and coaches. Tyler Summitt qualifies as a sexual predator in their book.

Tyler Summitt has no business being anywhere near a coaching position, and anyone who thought it was a good idea to allow him near high school girls in Fairborn from the Athletic Director, to the Principal to the School Board and the Superintendent should be resigning on Monday. None of them are fit to make decisions involving the health and well-being of the children of Fairborn.

If I was a parent of a Fairborn High School girls basketball player, I’d get a restraining order against Tyler Summitt before the season began. He can get a job doing something else where he’s not in a position of authority over impressionable women.